Ironically, the first game in the Front Mission trilogy to arrive in North America may actually be the best one to introduce the series to a new audience.

Ironically, the first game in the Front Mission trilogy to arrive in North America may actually be the best one to introduce the series to a new audience. This strategy-simulation game features cool mech designs, an intricate plot, involving characters, and gameplay suited for both hard-core and casual gamers.

The story takes place in the year 2112, ten years after Front Mission Second. You play as Kazuki Takemura, a student at a technical high school, as well as a test pilot for Kirishima Industries. He and his friend Ryogo Kusama are delivering new war machines, called Wanzers, to a military base located in Yokosuka when a mysterious explosion leads both characters into an unexpected turn of events.

You navigate through the story with command windows that let you talk to different characters, move from one location to another, surf the Net, purchase supplies to equip your Wanzers. Between stories, you go through several missions where you will take your characters and their respective Wanzers onto the battlefield. The battlefield takes the format of orthodox strategy-simulation games, implementing a rigid grid system. The Wanzers have assorted types of weapons, such as machine guns, shotguns, missiles, grenade launchers, and flamethrowers. Each character has an experience level that conveys how efficient he is at using the different kinds of weapons. It's up to you whether specific characters take control of a short-range, heavy-armor type or a long-range, light-geared type of Wanzer. The field map, Wanzers, and foreign objects, such as trees or freight boxes, are all rendered polygonally. When you are engaged in battle, the field map zooms in and shows the battle scene. The load time of zooming into the field map is very, very slight, making transitions into battle very smooth. Also, in FM3, the entire battle sequence only takes a couple of seconds, as opposed to the long 30-plus seconds each sequence took in FM2. It took several hours to finish just one mission in FM2, but due to the smooth transitions and shortened battle sequences, FM3 has a much faster pace.

In the battlefield, each character has a certain number of active points (AP), which are spent when you move the character from one grid square to another and fight against other Wanzers, and regenerate after each turn. Characters also acquire skills depending on what type of armor the Wanzer is equipped with. Though skills vary, most of them are useful in battle. For example, your character can shoot more ammo rounds in one turn, specify which body part of the enemy Wanzer to attack, or attack more than once in one turn. At the end of each mission, you will be rated on how well you did. You earn different medals ranging from platinum, gold, silver, to bronze. Having more platinum medals could earn you a much bigger reward later on in the game. You can also surf the Internet (well, the Internet according to Square, anyway) in the game. You can access different forums, ranging from government to commercial to private. Although this was featured in FM2, most of the time the forums contained senseless English text and wasn't much use in the main game. In FM3, the Internet is an integral part of the game. There's also lots of weird little fun stuff you can do in there, too, such as change wallpaper on your computer, vote for your favorite school idol, send e-mails to Square, and much more. You can also engage in training on field maps generated by virtual simulators. Most of the time, you will want to put time into training to acquire the necessary skills you will need for the real battle.

There are about 60 stages in total, and you should expect to spend at least 50 hours completing the game. If you become hooked on the Internet section of the game, the chances are you will sink several more hours into it. Plus, there are two separate and different scenarios, which deliver great replay value.

Although Square has managed to make the game more straightforward, the graphics in the game have been downgraded. The Wanzers in FM2 were made up of more polygons, and the frame rate was a little slower in some situations. The lower polygonal count was probably a sacrifice that had to be made in exchange for the extremely short loading times in the battle scenes. Improvements include your ability to rotate the field map very smoothly, as opposed to being able to rotate it only every 45 degrees in FM2. Other areas, such as the gridlines on the field map, the digital novel part of the game, and the FMV sequences are definitely much better-looking. The movements of the Wanzers from one grid to another looked pretty awkward in FM2; they looked like baby frogs leaping from one box to another. In a lot of respects, the field map is much more similar to the original Front Mission on the Super Famicom. The sound effects in the game have improved, and the FMV sequences definitely are worthwhile and entertaining. The soundtrack fails to deliver in some situations and ends up feeling average. One thing that may be a disappointment for fans of the series is that the dark, post-industrial atmosphere of the game has been diluted, resulting in a more futuristic, techno-pop image. As a good analogy, it's almost like how Namco's Ace Combat series changed its image and atmosphere completely when Ace Combat 3: Electrosphere came out. The North American version of Front Mission 3 does a pretty good job of translating the original Japanese text, but sometimes the menus are filled with abbreviations and shortcut terms that will seem needlessly cryptic to first-time players.

Front Mission 3 has managed to retain its strategy-simulation aspects, albeit at a relatively simpler level, which will let beginners feel comfortable playing the game and keep the hard-core gamers satisfied, too. Square has managed to deliver a good human drama based on the theme of war in the Front Mission series, and this game fits the series nicely. 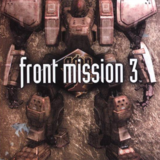