From Russia With Love Review

From Russia With Love is no less simplistic a shooter on the PSP than it was on consoles, and new problems conspire to make this version markedly worse.

Late last year, EA released its second attempt at a third-person shooter starring the most daring and dashing of British secret agents, James Bond. Based on the classic film of the same name, From Russia With Love used many of the same ideas and concepts as EA's entirely original Bond adventure, Everything or Nothing. Sadly, something got lost between sequels. From Russia With Love lacks the same sense of visceral thrill that the first game had, not to mention any measure of challenge. The fact that it hacked up the film's plot quite a bit to make it game-ready didn't help matters, either. Now, From Russia With Love is arriving on the PlayStation Portable, and practically every criticism you could lobby against the original game is still an issue here, along with a host of new issues that make this version decidedly less fun to play.

In the movie, the plot follows James Bond as he travels to Istanbul to meet with a supposed Russian defector (of course, a beautiful woman) who wants to turn over a Lektor, a Russian cipher machine, to MI6 in exchange for being able to meet the love of her life (Bond, in this case). Of course, nothing is as it seems. Evil crime syndicate SPECTRE (Special Executive for Counterintelligence, Terrorism, Revenge, Extortion) is behind this trap, and what follows is another traditional Bond escapade filled with adventure, clever one-liners, and attractive women.

The game follows the plot in a fairly loose fashion. It has all the basic story details right, but it rewrites a lot of the key scenarios to suit itself. Big climactic sequences, like the confrontation on the train, are completely changed--and not necessarily for the better. The action sequence where Bond is ducking and dodging a low-flying helicopter that's trying to kill him...that's gone from the story altogether. There are also some weird detail changes, like how SPECTRE is renamed "Octopus" (evidently due to legal issues surrounding the name, but disappointing nonetheless). Furthermore, the first and last levels of the game are completely tacked on, with practically no story relevance whatsoever. The film's ending doesn't exactly come across as fodder for a great last game level, mind you, but what the developers pulled together here isn't satisfying or interesting.

Interestingly enough, the best parts of From Russia With Love are the ones that EA managed to successfully translate from the film. The shoot-out with the Russian soldiers in the gypsy camp, the daring heist of the Lektor from the Russian consulate... These are the sequences that are the most memorable and enjoyable by far, not necessarily because of how great the gameplay is, but because they appropriately stretch out a few minute-long film sequences into a 10- to 15-minute level without sacrificing the great bits from the film. Fortunately, there are several of these sequences in the game, although there are less of them than there were in the console versions. All the driving missions from the console game have been cut here, which is really unfortunate, since some of those were among the most enjoyable levels.

From Russia With Love looks and plays a lot like Everything or Nothing, which isn't surprising since it's running on an engine that seems very similar to its predecessor's. Bond is dealt a variety of weapons and gadgets to use, including a few nifty ones like the Q-copter, a miniature helicopter that provides Bond with surveillance of hard-to-reach areas and acts as a weapon (in that it will explode on command). Bond also has a special belt that lets him rappel and ascend steep areas. There's also the crazy jetpack, which you can use to navigate certain levels and wreak quite a bit of havoc with its machine guns and guided rockets.

The biggest problem with From Russia With Love on consoles was that it gave you these cool gadgets and tools to do things with, but it rarely presented you with situations where you'd have to use them. Not to mention that the game was just stupid easy, making some of the cooler spots--like the "Bond moments," where Bond would shoot a barrel and make a bunch of bad guys explode, and the like--almost entirely unnecessary. This is somewhat less the case on the PSP. The gadgets still feel somewhat superfluous, save for very specific scenarios, but you will find yourself using the "Bond focus mode" more often, simply out of necessity. This is the vision mode where Bond can focus in on a specific enemy while locked onto him. By moving a small targeting reticle around, you can pull off headshots, as well as occasionally nifty moves like shooting grenades off belts and such. You basically have to use this mode here, because running and gunning it in this version of the game leads to quick death, not necessarily because enemies are any smarter than they were in the console versions (if anything, they're a might bit dumber), but because you'll just run out of ammunition otherwise. Once you're out of ammo, you're left with no choice but to run up to a guy and beat him via fisticuffs, which of course leads to you taking a few more bullets than you might prefer. Using the Bond focus mode is fine and dandy, except that Bond can't move around while he's focused on an enemy, which leaves him vulnerable to getting shot.

A new and very annoying problem that is specific to this version is camera control. The camera controls are mapped to the square and circle buttons, and camera rotation is painfully slow, so slow that it's sometimes quicker to just let the camera naturally move itself back into a proper position rather than stand still and hold down one of the buttons to spin it around. Normally, this would be merely cumbersome, but the idiotic method of auto-targeting makes it a real problem. You see, you can't lock onto a target via the target-lock button unless you're facing that enemy. If the camera's out of position, and fire starts coming from a random direction that you can't quite pinpoint, it means you either need to stop to spin the camera around to where the enemy might be, or just keep turning Bond around in every direction while randomly clicking the target-lock button until something sticks. As you'd imagine, this will lead to some unfortunate and frustrating deaths.

With the slightly increased difficulty, it will probably take you as long to complete this version of the game as it would the console versions, which is roughly six hours or so. There are only eight single-player missions in this version, but each one comes with a couple of side challenges you can take on once you've completed the story mission, and there are unlockables to be found, like more challenges and hidden characters for multiplayer (although few of them are very compelling). The challenges add some length, but not much depth. They're just the sorts of things where you'll find yourself sniping a certain number of enemies within a set time limit, racing a Q-copter around a level (again with a time limit), and so on and so forth. Some of these challenges can be amusing, but mostly they're just dull.

The ad-hoc multiplayer features in the PSP version of From Russia With Love are somewhat different from those on consoles, although they're not any better. There are really only two game types: deathmatch and domination (which is actually just a version of last man standing) for up to four players. These modes can be played in standard third-person mode, or with the jetpack, making for four multiplayer types. Unfortunately, all the different modes are the same: bad. The maps are cramped and difficult to move around in; the auto-targeting makes it easy to blow someone away quickly (especially with the jetpacks--in those modes, the entire competitive experience boils down to who sees whom first); and the silly little power-ups you can pick up--like ones that speed you up, make you invisible to enemy radar (yes, there's a radar that shows enemy positions at practically all times), or increase the amount of damage you can do--add little, if anything, to the experience. Fundamentally, this is just not a fun multiplayer game.

Graphically, From Russia With Love earns style points for re-creating the '60s era of Bond with flair. James Bond looks like Sean Connery circa 1963, and all his mannerisms are in place, including that classic method of holding his gun down by his waist. The models are quite realistic, although the animation seems to have taken a hit in translation from console to PSP. Character movements are more jarring and less realistic. The environments emulate those of the film well, although there's rarely much detail in the set pieces and buildings. Those environments do destruct quite nicely, though, so the lack of detail is forgivable. Fantastic explosion effects are offset somewhat by a fairly unstable frame rate, one that's far worse on the PSP than it ever was on any console platform. Other than that, it looks like a decent translation of the console game in handheld form.

The audio category is perhaps the most interesting one of the bunch. Sean Connery returns to play Bond once again, but that fact is something of a mixed blessing. For sure, it's of great nostalgic value to have the original Bond back in the tux, delivering those classic lines. But the truth is that Connery is not a young man anymore, nor does he sound like one. His thick Scottish accent permeates every line far more than it ever did during his days as Bond on film, and at times it actually feels like he hasn't fully committed to the role. He delivers the most renowned lines with plenty of flair, but the basic dialogue comes across a bit rushed and halfhearted. We don't want to say he was just doing this for a paycheck, but sometimes it definitely feels that way. Fortunately, the rest of the voice cast does an excellent job with what dialogue its members are given, and the soundtrack is still great. However, the sound effects sound decidedly worse on the PSP than they did in other versions, and they compare poorly to most other shooters on the PSP. The guns just sound tinny and weird, and explosions and other ancillary battle sounds are equally tin-can-sounding in nature.

While there's something to be said for carrying James Bond's latest video game adventure in the palm of your hand, From Russia With Love on the PSP suffers from too many drawbacks to make it worth your while. The breezy gameplay is only made more challenging by technical gaffes and frustrating issues, and the multiplayer component is the opposite of a good time. There are definitely satisfying moments to be had in From Russia With Love, but those moments are much more satisfying when played on any of the other versions that are available. 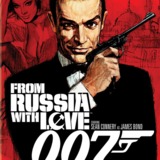