It's a far cry from the simple chore of helping a frog cross a busythoroughfare, but is it really more satisfying?

Ever notice the stuff companies put on the labels of their products to make you think you're getting something new when it's really the same old stuff? You know what I'm talking about - those blurbs that say "cool new look, same great taste," or something equally obvious.

And that pretty much sums up Frogger, the remake of the classic from the nascent days of video gaming. Of course, the new Frogger is indeed a far cry from the old one, but if you read the ad copy for the game you'll see that it follows the same time-tested marketing formula used for decades by all sorts of manufacturers of consumer goods. After all, is there really anything special about "dozens of challenging new levels" or "9 unique worlds" in a remake of an old platform game? Of course not - no one's going to rerelease a game the whole world's played ad nauseam and use the same levels, and there's nothing particularly extraordinary about grouping them into worlds, either. And "3-D graphics and cool music" are pretty much de rigueur for any new release, aren't they?

That rant might make it sound like Frogger sucks, but that's not the case at all. What it does mean is that the "new and improved" Frogger probably won't convert anyone who didn't care for the old one, and that gamers who liked the first one will groove on this one, too. And what, you ask, about the generation of gamers that's never tried Frogger? Well, I've got a sneaking suspicion that guiding a cute frog to save his offspring - even if it is a 3D frog - somehow won't have quite the same appeal now that it did when MTV first went on the air.

Although Hasbro has included a few 2D levels from the original game for old time's sake and created a few extra 2D levels to ease players into the new world of Frogger, the big selling point for the remake is that the action takes place in three dimensions. Platforms moving both horizontally and vertically must be negotiated for Frogger to reach his destination, friendly birds can be mounted for a quick flight to a critical limb of a tree to begin a journey to the ground, and there's even a level where you take Frogger to the slopes for some ski-jumping action.

It's a far cry from the simple chore of helping a frog cross a busy thoroughfare, but is it really more satisfying? Certainly the visuals are better - how could they not be - but when compared with what you'll find in other current releases they're not what you'd call inspiring. And often they don't convey a true sense of three-dimensionality: Yes, you move downward through the limbs of a tree, but it doesn't really feel like you're moving down.

New power-ups add some spice to the game, but again it's really nothing earth-shattering - Frogger can grab flies and other items with his "heat-seeking tongue" to extend the level timer, score bonus points, earn an extra life, move and jump faster, and light dark passageways.

Where Frogger does disappoint is that while Hasbro spiffed up the graphics and gameplay in several categories, it left some of the old video game conventions unchanged. Controlling the little amphibian is tough enough when you're dodging "deadly" enemies like bees, squirrels, and spiders, but Frogger's basic design turns challenges into frustrations. The problem is simple: You wind up covering the same ground over and over again because once you retrieve one of Frogger's offspring you find yourself at the starting line.

This is a real drag, especially on levels like "Frogger Goes Skiing"; once you've picked up a couple of little ones you just don't feel like maneuvering past the same obstacles three more times. And that feeling gets even stronger if there's an especially tricky spot to navigate past: After three or four failures at trying to do something you've already accomplished two or three times before, it's likely you'll just toss down the gamepad and walk away - especially if the controls are as glitchy and twitchy on your pad as they were on my Gravis GrIP.

Frogger's multiplayer mode pits up to four players in a race to reach flags; local games (same computer) use a split-screen mode, and you can also compete modem-to-modem, over a LAN, and on the Internet. It's a little more fun when the little amphibian you're controlling is outdistancing other frogs, but the problem of repeatedly covering the same ground crops up in this mode, too.

But in the end, the biggest problem with Frogger is that it's so very... passive. If you're going to remake Frogger, why not make him a little more proactive in the pursuit of his young - maybe turn that "heat-seeking tongue" into something a little more forceful than a long-reaching bug zapper. And think how much better a multiplayer game would be if you could bump other frogs into pits of lava or into the grinding wheels of machinery!

A lot of gamers will pick this one up for the sake of nostalgia, and there's nothing wrong with that. Just remember that it often turns out that the things you thought were so great in your youth sometimes don't stand up so well years down the road - even if they have been given a face-lift. 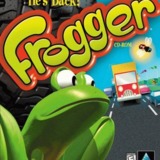