Frogger: Helmet Chaos is a lively 3D adventure packed with plenty to see and do.

Don't confuse Frogger: Helmet Chaos, which is available for the Nintendo DS and Sony PSP portables, with Frogger: Ancient Shadow, which is available for the PlayStation 2, Xbox, and GameCube. Both games went on sale the same day, both games are 3D platformers built around the play mechanics of the classic Frogger arcade game, and both games look and sound roughly the same. But, whereas the console game is bland and broken, the portable game is a lively 3D adventure packed with plenty to see and do.

Right off the bat, we're introduced to the story. It seems an evil crocodile scientist named Dr. Wani has come up with a way to control the minds of innocent animals by putting mind-control helmets on their heads. Frogger discovers the scheme when his pal Lumpy ends up with a helmet on his head, and after smashing the helmet, Frogger sets off to free his friends and stop Dr. Wani. That's all the story a game like this really needs, but kudos to Konami for going the full monty and crafting dozens of comic book-style story sequences complete with full voice narration. The story sequences in the DS and PSP games look and sound identical, although they are laid out differently due to each handheld's unique screen dimensions. On the DS, the hand-drawn artwork is shown on the top screen, while the captions are displayed on the bottom screen. On the PSP, the artwork and captions are displayed on just the one screen, so there's ample room to spare.

The game itself is a 3D isometric-view platformer that mixes the hop-and-dodge play mechanics of the classic Frogger arcade game with many of today's traditional platforming staples. Throughout roughly 30 levels, you have to safely guide Frogger past floating platforms, patrolling enemies, various block-and-switch-based puzzles, and a smorgasbord of other obstacles. There's plenty of jumping and pushing and pulling to do, but what distinguishes the game from traditional platformers are the controls, which emphasize Frogger's hopping abilities. Frogger doesn't walk, he hops. When you push a direction on the control pad, he'll hop one space in that direction. You can make him leap an extra space by pressing the jump button, or, have him jump straight up by pressing the vertical jump button. Tapping the vertical jump button a second time will make him perform a double-jump followed by a ground smash, which is a great way to grab floating coins or to reveal secret underground passages. In order to turn Frogger around without hopping, you have to push one of the shoulder buttons. It does take a while to get used to alternating between the hop, jump, and turn buttons, but once you do, you'll find Frogger fairly easy to control. Lastly, along with all of those jump-related controls, you can also press the grab button to extend Frogger's tongue or hands, which lets you push and pull objects and swing across dangling hooks.

Frogger: Helmet Chaos is very much unlike its recent console counterpart, Frogger: Ancient Shadow, even though both games look, sound, and play similar to one another. The levels in Ancient Shadow are boring and drawn out, and the controls are often unresponsive. Furthermore, it seems like the levels in that game were built to emphasize how complicated the controls are. Those complaints don't apply to Helmet Chaos. The levels in the portable game are lively, diverse, and nicely balanced in terms of difficulty and length. The second level alone contains a few block-pushing puzzles, a tree swing, an obstacle course with some enemies, a pair of underground caves, and two potential exits. One exit leads to a beach level, which has a slide puzzle minigame and numerous jump sections where you need to pull platforms in order to create footfalls. The other exit leads to a farm level, which has fewer jumps and more enemies, and contains a bug-eating minigame and an optional baby-bouncing minigame. And that's all in the first few levels! Most levels have optional side areas and hidden underground caves to discover and explore. Some levels shake things up by letting you choose between multiple exits, or by giving you the option of competing against the CPU in a minigame for the chance to skip a level or win additional health units. That sort of nonlinear, choose-your-own-adventure-style of progression is nice, even if it means you'll have to play through the game multiple times in order to experience all of the levels and bosses it has to offer.

All told, the story mode should take most players roughly four hours to finish, and twice that much time if you want to see all of the levels and unlock all of the minigames. Frogger: Helmet Chaos actually has a decent selection of minigames, and they're all multiplayer-capable. Some are simple tag and avoid-the-crumbling-floor-type games. Others are takeoffs on classic arcade games, like Bomberman and, of course, Frogger. The DS and PSP versions of the game each have one minigame that's not in the other version. For the DS, it's Roly-Poly Toady, a demolition derby game where you blow into the DS microphone to move your onscreen character. And on the PSP, it's Gator Gotcha, a polygon-intensive gator-dodging game. In all, each version contains eight minigames. Thankfully, you don't need multiple game cards or UMDs to take advantage of these multiplayer minigames. Just as long as you have one copy of the game, you can use the system's wireless game-sharing feature to beam the minigame to your friends' systems so they can play alongside you.

In terms of presentation, the game does a good job of flexing the visual and audio muscle of the systems it's on. On the whole, the quality of the DS version is about on par with typical PSOne or Nintendo 64 games, and the PSP version looks and sounds just as good as the Frogger games that have been released for the PlayStation 2. The isometric viewpoint serves the game well, lending enough depth to the environments without obscuring line of sight. And the 3D graphics make it easy to quickly judge platform heights and jump distances. Environments are colorful and run the gamut from tree-filled jungles and grassy hills, to frozen mountains, dank factories, and gilded castles. Little details, such as fluttering fireflies, flowing streams, and massive waterfalls, help bring the environments to life and offset the bland nature of the rectangular platforms and blocks. Frogger himself has a wide variety of different animations for actions like hopping, jumping, landing, and pushing and pulling. The enemies aren't quite as realized, but they do at least have separate walking, running, and turning animations. Plus, there are dozens of different enemies, unlike the recent console Frogger game, which recycled the same insects constantly.

The audio is fairly pleasant, too. Many of the in-game tunes sound similar to themes found in games like Super Mario World or Sonic the Hedgehog. The various animal and insect noises used for the sound effects aren't particularly noteworthy, but there are plenty of them. And, again, the voice acting during dialogue sequences is a welcome feature.

Although the level layouts in the DS and PSP versions are identical, the PSP version definitely benefits from the superior hardware. Graphically, the PSP game has a higher polygon count, better textures, and more miscellaneous visual effects. For instance, the breakaway ice platforms in snow levels are transparent in the PSP version, but not in the DS version. By the same token, the music in the PSP game is a touch richer and fuller than it is on the DS.

No matter which version you get, if the concept of a 3D platformer built around the classic Frogger play mechanics appeals to you, you'll probably be pleased with Frogger: Helmet Chaos. 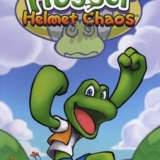 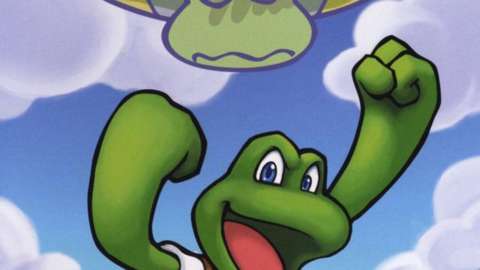 Frogger returns in an all-new platform game, Frogger Helmet Havoc. In the amphibious hero's latest adventure, Frogger must stop an evil force that threatens his home, Firefly Swamp, and the nearby kingdom of Bunnington Hollow.