If you're new to this specific blend of fast action and simple puzzles, Frogger Beyond can offer a quick and fun experience.

Frogger's life has been a rocky one in recent years. After spending more than a decade in video game mascot purgatory, alongside the likes of Q*Bert and Dig-Dug, the now-defunct Hasbro Interactive revived the traffic-dodgin', lily-pad-hoppin' amphibian for a series of challenging and increasingly refined action puzzle titles that remained faithful to the core Frogger mechanics while expanding on the concept and bringing the character into the third dimension. Shortly thereafter, Konami and Hasbro engaged in a little intellectual property scuffle, and Konami walked away with the Frogger license. At first, Konami completely flubbed the license by attempting to turn Frogger into a generic 3D platformer hero with Frogger: The Great Quest. But it would seem the company has learned its lesson, as Frogger Beyond brings the gameplay back to the frantic puzzle action that made Frogger 2: Swampy's Revenge an enjoyable little title.

Frogger Beyond catches up with our hero just after his most recent adventure, on the day before his birthday. Apparently, this is a very special birthday, one that requires him to go before The Great Council and endure a rite of passage that will turn him from a boy into a man. Frog. Frogman. Anyway, each of the nine members of The Great Council has his own uniquely themed "world," and Frogger must traverse each world if he is to prove his mettle. Considering how flimsy this concept is, the game spends way too much time on exposition and attempts to fabricate more back story than is necessary.

The quality of the action, though, helps make up for the arbitrary story mechanics. Those familiar with Blitz Games' Frogger 2: Swampy's Revenge, or the more recent Zapper, will feel instantly familiar with Frogger Beyond, which plays almost identically to those titles. You're presented with a confined 3D environment that is populated by enemies and littered with traps, and all you have to do is get Frogger from one end to the other. As Frogger doesn't have any real offensive abilities, you'll have to rely on your wits to make it through each level, and the keys here are patience and timing. All the enemies you'll encounter will strictly adhere to a specific movement pattern, and once you've figured out where they'll go next, you can safely make your move. When you're not hopping out of harm's way, you'll be collecting lots of coins and the occasional extra-life power-up. The coins you collect can be used between levels to get more lives or buy other power-ups, which you can trigger on command anywhere during the game. These include an offensive power-up that lets Frogger use his tongue to gobble up enemies, a power-up that lets Frogger pass through enemies and traps unscathed, and a no-explanation-needed speed power-up.

The pace of Frogger Beyond keeps things going at a decent clip, and though the game offers a respectable level of challenge from the start, each level is punctuated with enough checkpoint markers and extra lives to keep things from getting too frustrating. In all, Frogger Beyond is a fun diversion, but it does little to genuinely improve upon the formula that Blitz Games established with Frogger 2: Swampy's Revenge and continued with Zapper. But unlike Zapper, Frogger Beyond offers no multiplayer options, and the only replay value to be seen is the time attack mode, which just puts you through levels you've already completed in the story mode with a focus on speeding through the course. With a total of 36 levels, Frogger Beyond could provide you with a good afternoon's worth of entertainment, but not much beyond that.

Considering the tightly focused scope of the levels in Frogger, the graphics are rarely given a chance to impress, though the game handles its modest task fairly well. Though the level geometry is generally quite basic, each world represents its respective theme fairly well through consistent use of clean, crisp-looking textures in tandem with some underplayed particle effects. The camera, while generally giving you a limited view of the bigger picture, does a good job of keeping your attention focused on the task at hand. On the downside, Frogger himself brings little to the table, as his animations are limited and lack personality, and transitions between different animations are nonexistent, which can occasionally produce some clunky moments. The enemies suffer from similarly limited animations, and it's often obvious that their gyrations exist to distract you from the fact that they're just floating along a predetermined course. The sound design in Frogger Beyond exists on about the same level, with the music complementing the different visual styles of each world, but not adding much else. Konami has given Frogger more anthropomorphic qualities, and he'll randomly spit out forgettable little one-liners. The standout piece of music in Frogger Beyond is the "Frogger Rap," which exalts our green hero to a tune that combines twangy banjos and dancey beats. It's hard to call it good, but it certainly has a campy appeal.

After its misstep with Frogger: The Great Quest, Konami has brought the franchise back on track with Frogger Beyond. But this move just brings the series back to square one, and it doesn't improve on the groundwork laid down by the Hasbro Interactive Frogger games. If you've already played through those, or Blitz Games' follow-up, Zapper, Frogger Beyond isn't going to wow you. But if you're new to this specific blend of fast action and simple puzzles, Frogger Beyond can offer a quick and fun experience. 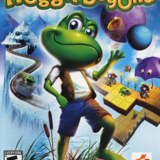 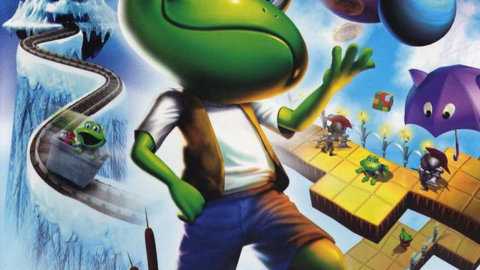 This new action game will be inspired by the original arcade game.