Even with its minor problems, Freedom Force is very easy to recommend--it's a superhero game that gets everything right.

Freedom Force isn't the first eagerly awaited superhero game, but it is the first to actually be released. With the cancellation of Hero Games' Champions, Bullfrog's The Indestructibles, and MicroProse's Agents of Justice in previous years, it seemed as if there would never be a decent superhero game for the PC, or any superhero game for that matter. But Freedom Force saves the day. Irrational Games has combined the surface elements of a role-playing game with a tactical combat engine, creating a hybrid that isn't very deep but is totally satisfying in its breadth. And, perhaps more importantly, Freedom Force has a winning personality and a developed style that's as good as PC gaming has ever offered--it joins the ranks of games like Interstate '76 and Grim Fandango.

Immediately upon starting the campaign, it's apparent that Irrational Games took its inspiration from the silver age of comics. The game opens with the origin of Minuteman, the patriotic leader of Freedom Force. The first thing you see is an elderly man's face, all Jack Kirby-style black lines and wrinkles, surrounded by bright secondary colors. The narrator explains the game's events in a bombastic voice that owes more to Adam West's version of Batman than Tim Burton's. The heroes of Freedom Force don't have time to brood in dark corners; they're too busy returning stolen purses, fighting the communists, and protecting Patriot City from dinosaurs and aliens. It's a spot-on homage to the era that may seem like a parody only because it gets almost every detail, from the dialogue to the enemies, exactly right.

Freedom Force is primarily a squad-based tactical game. At the beginning of each mission, you choose a squad of up to four heroes from the available roster. You enter the map, fight some enemies, occasionally fight a boss, return to base, and repeat. The combat system is similar in some respects to that in Baldur's Gate, in that it seems like a turn-based system but it plays in real time. You can pause the game whenever you like to issue orders, and you can also slow things down and speed them up at your discretion. Your heroes have a wide variety of attacks and defenses, including melee, projectile attacks, and area-effect attacks. Attacks do different types of damage, such as fire, cold, crushing, mental, magic, and so forth. Defensive powers will generally help against only a particular type of damage, and certain heroes and enemies are particularly vulnerable or immune to certain types.

The best thing about the combat system is that the streets of Patriot City aren't just a backdrop. The environments play an important part in any battle. Strong heroes can pick up cars and throw them. You can wrench stoplights out of the ground and bat thugs around with them. You can jump, climb, or fly to the tops of buildings and rain energy beams down on your foes. The physics are great--you'll learn to use them to your advantage, knocking foes off of buildings and batting them into oncoming cars. You can turn whole buildings to rubble in a matter of moments. You'll want to be careful, because causing too much havoc can take away from your prestige--you gain prestige points at the end of each mission, which are used for recruiting new heroes. But in the best combat missions, you'll be out of the confines of the city and free to wreak destruction as needed. The combat system includes everything you'd want in a superhero game--some characters can fly, some can climb walls, and some can leap tall buildings. It's almost perfect.

There are only two problems with the combat. The first is that the game doesn't allow for automatic pausing at regular intervals. Stopping to issue orders must be done manually, which is strange considering that it would be impossible to play Freedom Force as a real-time game. Missions often require you to split your squad, so keeping track of everything that's going on becomes impossible without stopping and surveying the situation. The system works as is, but an automatic pause would be more than welcome. What's more of an issue is the complete lack of a minimap. Except in rare cases, there's no indication of offscreen enemies, even if they are within the view of your squad. Enemies can also be hidden under trees and other objects, and when your squad is divided it's easy to overlook someone getting clobbered by a villain that's not visible for one reason or another.

In theory, the problem with superhero games is that superheroes are traditionally static characters: They have their powers and that's that. Irrational has broken with tradition here, and it was a wise decision. As you complete missions, your heroes gain experience. Every one of your heroes gains experience for every mission, though the four who directly participate get slightly more. When a hero gains a level, he or she gets points that can be used to buy new powers or to improve existing powers. Deciding when to improve and when to expand a particular hero's powers is one of the more interesting elements of the game, allowing you to create heroes that are relatively weak yet versatile or heroes with devastating yet very specific abilities. Should El Diablo specialize in his missile attacks, which do a good deal of damage but are hazardous in populated areas? Should the strong but slow Man-Bot work on his ranged attacks to make up for his speed deficiency?

The experience system is Freedom Force's most significant tie to role-playing games, but there are a few other touches borrowed from RPGs as well. Missions occasionally have secondary objectives, small side quests you can find by talking to the citizens of Patriot City. These tend to break up the monotony of the missions, which often require you to just hunt down enemies on a map. The later missions lose the side quests but get much more interesting in structure. Missions are arranged into short storylines. A new supervillain appears in Patriot City, and Freedom Force must find out what he or she is up to, then put a stop to the nefarious plans.

The villains in Freedom Force are creative and interesting, as are their minions. The Shadow lives underground with her deformed acolytes, Deja Vu takes to the streets with his cloned sidekicks, and Mr. Mechanical wreaks destruction with his robotic cohorts who swing their wrecking-ball arms at the city's landmarks. Though each villain's arc is a self-contained set of missions, there's an overarching story, one that explains why these heroes and villains acquired their powers to begin with, and who is behind the strange goings-on in Patriot City.

The heroes are at the heart of this story, and like all good comics, Freedom Force is essentially a soap opera. You've got a love story, and you've got interteam rivalries. You have all the archetypes, from the android that works purely on logic to the brooding loner trying to amend past wrongs. You even have new archetypes, such as a speedy Southern gent who spouts ridiculous slogans and sounds like Ross Perot and an ex-fisherman turned fish-man who sounds like Sean Connery. And though there are plenty of missions, and some good moments of character development, you'll wish the game were longer simply so the relationships could develop more. There are a lot of members of Freedom Force, and they each have a strong personality. It's a shame that some of them have to be relegated to supporting roles.

You can even make your own characters for the team, and the character editor is one of the game's highlights. Almost every possible power you could want is included, and the wide variety of user-created skins means that you can easily re-create your favorite superheroes and recruit them for your team. Add Wolverine, add Green Lantern, add the Silver Surfer. You can even create your own, if you're so inclined.

The characters look great. Freedom Force is bright and colorful, and the costumes all perfectly evoke the silver age. You even get quick sound-effect images onscreen during battles ("Thwack!" and "Foosh!" and so on). It's hard not to wonder, at first, why the designers went with a typical 3D look for the characters and not the cel-shading effect that gave Jet Grind Radio for the Dreamcast its distinctive look. But the 3D graphics are great and well suited to the game. The origin movies are excellent, perfectly re-creating the art of the era, with slight animations to give the panels life. Even the loading screens are great, featuring fake comic book covers that are dead ringers for the real thing and that will most certainly bring to mind classic comic book hooks like "In this issue: Everybody dies!" In comparison to the origin movies and the loading screens, the in-engine cutscenes unfortunately aren't as comic book-like.

The audio in Freedom Force is even better than the graphics. The voices are perfectly overdramatic, delivering the earnest dialogue with a seriousness that borders on the zealous. "All I need is a spaceship," says Mentor in his origin movie, "...and courage!" There are a few bad jokes, but for the most part the game plays it serious enough to be the right kind of funny. Some of the voices aren't as good as the majority--mostly bit parts that sound poorly recorded. The music is excellent and diverse, featuring different themes for different characters and managing, like the game itself, to be both lighthearted and serious at the same time.

The game's occasional problems are easily forgivable in light of all it has going for it, but they can sometimes be frustrating regardless. Some are small interface issues, like the fact that saved games are listed alphabetically instead of chronologically and that it's a bit of a hassle to figure out which heroes have gained a level after the initial mission wrap-up screen. You can't reconfigure your team when restarting a mission unless you fail the mission. The game is slightly unstable, and occasionally a mission will be impossible to finish for reasons beyond your control, such as when a plot-critical nonplayer character falls unconscious or gets knocked out of speaking range by a stray explosive. But without a doubt, the biggest shortcoming of Freedom Force is that the single-player game is really all there is. There's a deathmatch multiplayer mode, but there's no cooperative mode and no skirmish maps for extended single-player gaming (though Irrational has promised a skirmish mode in an upcoming patch).

Fortunately, the single-player game is highly replayable, if only because of the nearly limitless number of heroes and tactics available. And even with its minor problems, Freedom Force is very easy to recommend--it's a superhero game that gets everything right. It has the living, interactive city promised in The Indestructibles, the tactical combat promised in Agents of Justice, and the role-playing promised in Champions. It looks great and it sounds even better. You'll have a great time with Freedom Force if you like, or have ever liked, comic books, because it was made by people who obviously love them. And though Freedom Force could probably skate by on its premise and personality alone, it doesn't need to: Beneath the masks, capes, and heroic platitudes is a superb game. 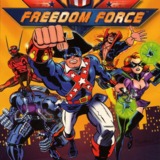