The puzzles can be fun and challenging for a short while, but the anemic gameplay and generic presentation will leave you feeling unsatisfied with Frantix.

Frantix is a 3D puzzle game that has you running through a bunch of mazes, pushing crates, avoiding traps and enemies, and collecting gems to open up an exit. That's it--no character background, no multiplayer, no convoluted story about the gems or the doors they're used to open--it's just one quick puzzle after the other until you've finished the game. The puzzles can be fun and challenging, but the anemic gameplay and generic presentation will leave you feeling unsatisfied with Frantix.

There's only one mode in Frantix, which might be called story mode without the story. You solve puzzle after puzzle by collecting gems. Most gems require a bit of effort to collect though, since levels are often filled with lava, water, quicksand, traps, creatures, and locked doors. You can't attack or jump, but you can shove bombs, crates, and stone blocks around, which comes in handy for killing enemies, triggering switches, or making makeshift bridges across hazardous areas. Once you have enough gems you just need to find an exit, and presto, the level is done. As you clear levels and collect gems, other puzzles are unlocked. There are six themed worlds in all, each with between 15 and 40 puzzles to complete. Each level takes anywhere from seven seconds to a minute and a half to complete. The levels are often tiny, but there are loading times between each one. Even though the load times are short, it's still irritating to have to wait through a five- second load screen for only 10 or 15 seconds of gameplay.

Some of the levels are inventive and challenging, requiring you to carefully assess each puzzle and carry out a series of moves in a specific order to clear the level. Other puzzles are more obvious and just require some quick moves and good timing to complete. Unfortunately, because of the way the game is constructed, you just end up trying a bunch of different solutions until one works out. Once you know how to solve the puzzle, there's no reason to go back and play it. You can try to best your time through the level, but that isn't particularly satisfying. Even the puzzles you haven't cleared start to look the same after awhile. Once you learn a few of the tricks the developers like to use, it doesn't take more than a few tries to figure out how to solve any given puzzle.

The biggest challenges in all of the puzzles in Frantix are the view angle and the control. You control one of a handful of characters that all behave exactly the same. You can use the D pad or analog stick to move, but you can only move in four directions and you're restricted to an invisible grid. It's like Pac-Man in that when you push to the left you move at least one full space to the left. It isn't like modern games, where you can creep around in any direction you please and stop on a dime. The levels are designed accordingly, but this type of control takes some getting used to. Sometimes you want to run for a short distance and then stop. But if you don't let your thumb off the button at just the right time, your character won't stop and you'll overshoot your target space. This can be extremely frustrating when you're trying to avoid all kinds of enemies and other hazards while quickly making your way through a level.

The view angle can also be a problem on some levels. Since all the levels are in full 3D, your view of the action is restricted. The object will be temporarily transparent when you run behind it so that you can see what you're doing. That's all fine and good, but the problem comes when you can't see items or enemies within the level. Since you can't jump or climb, there's really no reason for this game to be in 3D. This is made quite obvious by the fact that the best view is the alternate top-down perspective you get by hitting the triangle button. In fact, you'd probably stick with the top-down view all the time, except that for some reason the game automatically switches back to the default view every time you start a new level or restart a current level. You can also set the camera to one of the four directions, but that just makes things more confusing because it's easy to get disoriented.

Despite the fact that the game is in full 3D, it doesn't look particularly impressive. The doors and gems have a transparent effect, which makes them difficult to see. In fact, the whole game has a dull, washed-out look. You'll see the same crate, block, switch, and enemy in every single level. A little more effort in the visual presentation would go a long way in a game like this, but as it is, Frantix looks about as lifeless as it plays. The sound is unremarkable as well, and there are no sound effects to speak of other than an annoying grunt emitted by your character every single time you bump into a wall or other impassable barrier. The mellow, ambient tunes are nice to listen to, but they sound a bit muted, and there's no option to adjust the in-game audio.

In fact, there aren't any options whatsoever in this game. Oh wait, that isn't quite true...you have the option of watching a couple of movies. One movie is the game credits, which is just a bunch of names scrolling over a black background. The other movie is a short computer-animated film called The ChubbChubbs! Apparently, the film won an Academy Award for best animated short film…in 2002. Sure, it's a cute four-minute flick, but it doesn't add any appeal to the game and certainly doesn't make it worth your $40. With a bit more effort Frantix could have been a decent budget title. At full price, this game just isn't worth playing. 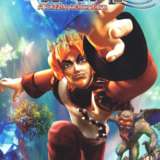