It has major gameplay and graphics problems to address before it can even consider competing with the big boys in basketball video games.

"Sports games. Fox attitude." That's the slogan slapped on the box of Fox Sports College Hoops '99, the first NCAA basketball game for the Nintendo 64. If that's the case, this game needs an attitude adjustment - no thanks to choppy, sloppy animation and excruciating gameplay slowdown.

On paper, Fox Interactive has the trappings of a winner. Offering more than 120 college teams, a full slate of real-life NCAA tournaments, and a slick presentation style lifted straight from a Fox Sports broadcast, this game has the building blocks necessary to deliver a solid simulation experience. Purists will especially appreciate the inclusion of tournaments above and beyond the Final Four, from conference tourneys to early-season events such as the Windy City Shootout. The only major event missing is the NIT, an understandable omission because your goal is to get to the Final Four anyway.

Unfortunately, building blocks don't mean squat when the base they're on is shoddy, and such is the case with this game. The gameplay is plagued with slowdown problems. The worst example is when a player takes a shot. In many cases, the game speed slows as the ball travels to the basket. Although this "effect" might add dramatic tension to the shot, it's hardly realistic, and worse yet, it creates this jerky stop-and-go tempo that wrecks the game's flow. It's frankly odd, since the rest of the game plays at a respectable speed. As far as AI goes, it seems adequate. The computer is smart enough to understand basic in-game strategies, such as pressing and popping threes when down late in the second half or rotating on defense to cover an open man. However, no matter how hard Fox may try by adding coaching schemes and such, it doesn't play very convincingly as a college hoops sim. Many offensive plays wind up as one-on-one affairs, since many plays don't encourage cuts and off-the-ball screens. There's mostly a lot of standing around, which doesn't provide much incentive to pass. Another minor gripe: On top-of-the-key screens, players are setting them way too high, as if they were using the NBA stripe as a measure. Finally, for some odd reason there's apparently no way - at least in the single-player mode - to view the NCAA Tournament brackets. One of the great joys of following the NCAA Tournament is to see who upsets whom to advance. Plus, a bracket view would help you scout upcoming opponents.The game's graphics only add to these problems. Although the crowd and stadium graphics are fairly solid, the sluggish animation results in some odd occurrences. There were instances of players dribbling through defenders. There were instances of defenders "warping" from the baseline to block a dunk. There were instances when a dunk animation would kick in, and the game control would seem to slow as the dunker "teleported" from the floor to the basket - and still jam even if he wasn't lined up properly. These unexplained phenomena might make sense for the X-Files basketball video game (with Fox, who knows?), but they have no place in a college hoops sim.

Despite the graphics and gameplay snafus, the control is actually pretty responsive. In addition, the simple controls and easy non-menu, on-the-fly play calling are designed well enough for you to get into the game quickly.

The sound effects are rather sparse. Those spoiled by EA Sports' full treatment will be very disappointed here, since there is no in-game commentary - just a stadium announcer who calls fouls and scores. The game offers some unique sound innovations, such as aural clues when players need help on defense or are running a play on offense. There's also a "trash talk" button that's fine for two-player ribbing, but the unoriginal phrases get tired quickly.

Overall, Fox Sports College Hoops '99 comes off more as an incomplete work in progress than a solid debut title. It has major gameplay and graphics problems to address before it can even consider competing with the big boys in basketball video games. 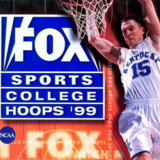