In this comedy spy thriller from Capcom, you can teach a guy how to be a spy,but you can't make him cover his mouth when he burps or teach him to speak towomen without making sexist or insulting remarks.

Can a television trivia slacker dude prevent a crazed Soviet agent from blowing up Los Angeles with a nuclear bomb? This question might not exactly beg for an answer, but in Fox Hunt, you'll have a pretty good time trying to figure it out. In this comedy spy thriller from Capcom, you can teach a guy how to be a spy, but you can't make him cover his mouth when he burps or teach him to speak to women without making sexist or insulting remarks.

Luckily, the hero, Jack Fremont, doesn't need to be suave or debonair to make this interactive movie entertaining. With 10 different solutions to the mission and a cast of wacky characters that even includes Elvis, Fox Hunt has enough entertainment value to make up for the fact that the lead character continually grates on your nerves.

If you like that famous comedian who starred as a pet detective in two movies, you're in for a treat, because Fremont seems designed from the very start to bear an uncanny resemblance to him in both looks and manners. Fortunately, even if you're not a fan, Fox Hunt has enough action to keep your mind off Fremont's often inexplicable behavior.

Like a serious spy movie, Fox Hunt has beautiful women, double agents, and exotic locations (Las Vegas and Colorado to name two…) but outdoes even Sean Connery in some of its action scenes. When was the last time you saw 007 take a jet-propelled wheelchair ride through a hospital, escape from crossdressing Soviets, or shoot down anvil-wielding Rob Lowe clones while freefalling from 20,000 feet? Now, that's action.

Although Fox Hunt is not particularly violent, when Fremont meets with a fatal accident, you are treated to the sound of his crushing bones or the graceful arc of his body as it flies out of a multi-story building.

The spectacular clarity of the digitized video, due in part to the fact that the original piece was shot in 16mm, and the rocking soundtrack give Fox Hunt the look and feel of an actual movie. Although there are a few minor technical glitches (video frames sometimes lose synch), none detracts in any way from the gameplay. Other problems are also relatively minor, but become noticeable after long-term play, like illogical game progressions (no matter which window you climb out of in Fremont's apartment, you wind up on the same ledge outside), and reused frames during action sequences.

Fox Hunt has one particularly annoying attribute. For most of the game you are able to save your place after you successfully complete an action run, but in the hospital sequence there's nearly three minutes from one save spot to the next. So, if you have trouble maneuvering the rocket-propelled wheelchair (and you will…), be prepared to memorize all the dialogue from the self-running clip until you master this particular obstacle.

Overlooking some of the childish antics of its hero, Capcom's Fox Hunt is an interactive movie that merits more than a showing or two. It's silly and amusing but surprisingly well developed and fun to play. 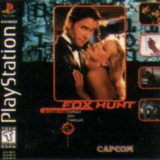