It's hardly foul, but good ideas and charming animations aren't enough to save Foul Play from repetition.

Beat-'em-ups have struggled to remain relevant since the death of arcades, with only a few recent entries in the genre managing to break up their quarterless monotony. By taking inspiration from two different sources--rhythm games and theater--Foul Play's unique approach to the genre is admirable. It's got charm, good ideas, and even better intentions. Unfortunately, it still falls into many of the repetitive traps of its beat-'em-up forebears, whether you play alone or with a friend.

All the world's a stage (the world's longest stage, judging by how far you travel left to right), and Baron Dashforth and his sidekick, Mr. Scampwick, are its two players. The game is set around a play in which Dashforth, a Sherlock Holmes-esque gentleman with both intelligence and physical prowess, recounts tales of his adventures as a daemon hunter. With an art style reminiscent of the cutout animation used in South Park, the action takes the form of an elaborate stage play of epic proportions.

While side-scrolling your way through old-timey England and elsewhere, fighting everything from vampires to pirates to robots, things can get a little button mashy. A few moves are unlocked as you play (such as an uppercut and a few charge attacks), but for the most part, it's viable to run up to enemies, hit an attack button repeatedly, possibly dodge or block an attack, and then go back for more. You do have to pay attention to your enemies, however, because Foul Play sports a counter and throw system not unlike that of the Assassin's Creed games. When a foe is noticeably preparing for an attack (or, as the game wonderfully puts it, "whilst he is signaling his intent"), a tap of the block button counters the hit and opens you up for new moves and strategies.

Though the game leans heavily on certain jokes (we get it, that stagehand isn't supposed to be onstage--hilarious!), there's a lot of genuine humor and charm in the visuals and presentation. Even the enemies, who tend to be obvious actors in large monster costumes, are funny to look at. If nothing else, it's refreshing to spend time in a setting that feels unique, even if the gameplay is overly familiar at times.

Style and setting aside, what sets Foul Play apart from most games of its ilk is its focus on maintaining performance instead of using lives and continues. Rather than health, you have a mood-o-meter, which measures how much the audience is into your actions onstage. This bears a striking similarity to the meter in Rock Band and similar games in both form and function. If you're doing well and maintaining combos, the meter goes up and rewards higher score multipliers. If you drop a combo and start getting hit, the meter goes down and threatens you with failure. The audience reacts to all of this both visibly and audibly, cheering loudly and tossing their hats into the air if they're particularly pleased with your performance.

To carry this Rock Band comparison even further, you build up a showstopper ability--basically star power--which, when activated, doubles your combos for a short time. This can be useful both for recovering if you're near failure or for maximizing your score during a point in the level when you know you can achieve a high combo even without help. In fact, the mere task of completing levels is easily accomplished--it's a higher score you're really after.

It's a shame more isn't done with showstoppers. While the system initially feels like a nice change of pace for the genre, the system is easily exploitable and doesn't encourage variety as much as it tries to. Early on, you gain an ability that lets you parry an attacking enemy and pummel him multiple times in midair, helping you build a high combo. The timing of this move works out to where you can almost always parry another enemy immediately after you finish with the first, letting you be in the air with a single combo, safe from enemies on the ground, for a long time. It's not an easy, foolproof key to perfect scenes and five-star success, but it gets awfully close.

The game is split into five plays featuring multiple acts. Each act, with the exception of boss acts, has three optional challenges associated with it that encourage you to play a little differently than you might otherwise. Well, sometimes, anyway. One challenge might be to pull off a certain number of ace returns, which happen when you successfully parry an enemy's projectile and shoot it back at him. That's a good example of something that can add variety to your play style. Most challenges, however, involve some form of getting high combos, which you theoretically should be trying to do anyway. Still, completing all three challenges in an act rewards you with a charm, an item you can equip for certain bonuses or upgrades, like easier combos.

When all the features are brought together, what you have is a brawler that manages to be unique in several ways yet still finds its way into the monotonous zone. The game is more enjoyable with a second player (in fact, a few challenges are tricky to pull off alone), and the animations and clever writing are wonderful enough to inspire cheesy grins. Yet too much of Foul Play is a slog, and sadly, this performance doesn't have enough chops to make it to Broadway. 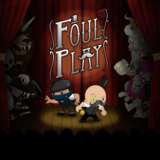 Britton Peele is a freelance writer for GameSpot and a Digital Entertainment Editor for The Dallas Morning News. Find him on Twitter @BrittonPeele. 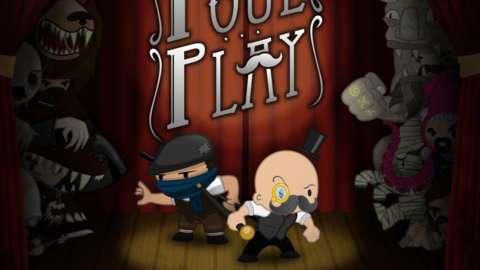 Foul Play is a side-scrolling brawler that rewards performance over pummeling.