Forza Horizon's untethered love for the open road makes it a terrific spinoff to this racing franchise.

There's something oddly romantic about Forza Horizon. Gone are the real-life circuits of Motorsport, replaced by a gorgeous stretch of the American West. Sweeping praries and looming peaks set a grand stage, and a persistent sense of competition keeps the vast expanse from feeling lonely. Add in Forza's famously stellar driving physics, and you have a game that makes it a joy to hit the asphalt and roam wherever the road takes you. The experience isn't as refined as its predecessors, but Horizon is an exciting and adventurous spinoff just the same.

Horizon's setting is a fictional interpretation of the Colorado countryside, with the Rockies on one end of the map and an imposing desert on the other. In between is a rolling mesh of highways, dirt roads, and small towns. It's a beautiful landscape, where varied geography and a full day-night cycle combine to create some impressive vistas. Moments like cresting a hill at 150mph just as the sun begins to rise are a frequent occurrence, leading you to throw your car around one corner after another in a fit of automotive wanderlust.

Of course, it's not all free-form exploration. Horizon's story--yes, this is a Forza game with a storyline--revolves around the titular Horizon Festival, an event that attracts 250 gearheads to compete in a slew of events spread throughout Horizon's version of Colorado. The story unfolds through cinematics depicting your rise through the ranks of the competition, hitting a few awkward notes along the way by focusing on a cast of desperately hip 20-something drivers and their penchant for forced trash-talking. Awkward though it is, the story never becomes invasive or obnoxious; it's merely forgettable fluff that serves to explain your place in Horizon's collection of events.

The structure of these events should feel familiar to anyone who has played a Forza game. Races largely fall into themed categories with performance caps that scale according to your progression. You might begin the game by facing off against C-class muscle cars before eventually moving on to a competition against S-class Italian sports cars. Horizon has inherited the smooth difficulty curve of previous games, so building up your skills from one tier to the next remains a nice, gradual process. It's unfortunate that so many of these cars are carryovers from previous games, and the overall selection isn't quite as expansive as Forza 4's, but the process of working your way up the performance index remains as enthralling as ever.

Where Horizon deviates from Forza's past is in its mixed-surface events and point-to-point races that take advantage of the expansive, sprawling terrain. This version of Colorado isn't all asphalt; you often find yourself tearing through winding dirt roads on your quest for victory. These surfaces don't feel as chunky and volatile as a rally racer in the vein of Dirt, but adjusting your driving style to handle varied terrain is a refreshing challenge. Events like these, as well as endurance runs that send you clear across the road map through constantly shifting geographical terrain, help to set Horizon apart from its circuit-based predecessors.

One of Horizon's great strengths is that, even outside of organized events, the sense of competition is all around you. At any point you can pull up behind other festival drivers (distinguishable from regular traffic by the name above their car) and challenge them to a race on the spot. Speed trap cameras are placed on just about every road, capturing your high speed as you pass through them, registering your pace on a leaderboard and, if you're good enough, sending a message straight to your Xbox Live friends that they've been outperformed.

Throughout all this is a real-time feedback system that functions as a natural extension of the one found in Forza 4. Only here it's not just stylish drifting that's rewarded, but also narrowly avoiding head-on collisions, knocking down stop signs, and catching the occasional bit of air. The rewards aren't massive--you're granted credits when you perform such-and-such number of dangerous maneuvers--but they function as a persistent form of positive feedback, letting you feel like you're never wasting your time by just driving around at your own leisure.

Despite Horizon's newfound focus on style and flash, sim enthusiasts need not be alarmed: this is no arcade racer. Like in previous entries in the franchise, vehicle handling is determined by a modular collection of driving assists, such as traction control, that let you fine-tune the experience to your liking. With all the assists enabled, Horizon is an accessible racer that doesn't command expert-level driving skills. But disable all those assists, and the cars are short of lively and demanding. You need to be wary of the Hennessy Viper's penchant for skidding around like mad when you've hit the throttle too hard in the low gears, just as you need to respect the Ford F-150's habit of flipping over on fast corners like a dog who wants its belly rubbed. But, as in previous Forzas, taming these beasts is a deeply rewarding endeavor.

You'll want to invest some time in your driving skills, too, because the AI competition has done its homework. Whereas Forza 4 suffered from an issue where opposing drivers would frequently overshoot sharp corners almost at random, there are very few of those mistakes in Horizon. The Forza AI's occasional aggressive streak remains intact--which you can have fun exploiting on the highway by luring anyone drafting you into oncoming traffic--but overall, the competition's intelligence feels somewhat improved.

Car customization is one area where Forza veterans may find themselves disappointed. You can still combine your own vinyl decals with new paint to create custom liveries, as well as upgrade your stock parts to become more competitive at higher racing tiers. But these systems are virtually identical to those found in the last few outings, and beyond that, Forza 4's advanced tuning system (where you could tweak tire pressure or brake bias, for instance) is a complete no-show in Horizon. On the plus side, the process of photographing your car and sharing your artwork is far more rewarding here than it has ever been thanks to the natural beauty and varied lighting of Horizon's virtual Colorado.

Those who invest time in designing their own vinyls and liveries will be happy to hear that the online storefront makes its return in Horizon (where you can import and sell your old vinyls), as do the vehicle-sharing car clubs introduced in Forza 4. Of course, Horizon's online offerings also extend to competitive multiplayer, where you can easily jump into a match using an intuitive and relatively effortless matchmaking lobby system.

At its best, Horizon's multiplayer is either incredibly intense (like gunning toward the finish line at night in a 20-mile point-to-point race) or ridiculously goofy (like eight cars careening around a golf course all trying to smash into one driver in the king-of-the-hill mode), but it's terrific fun throughout. And in a very nice touch, there's a slot machine system that rewards you with a random car or pile of credits every time you level up in multiplayer (which happens fast and often in the early goings).

While Horizon's competitive multiplayer is entertaining, its cooperative free-roam system feels like a missed opportunity. This is where you can get a bunch of players together in the same world and either wander around on your own or band together to complete co-op challenges such as combining for 100 near misses or having four players pass through the same speed trap at 200mph within five seconds of each other. Some of these challenges can be wonderfully entertaining, but the way they're communicated to players is clunky and obtuse. Only the host can select a challenge, and by default the game fails to tell you where a specific speed trap is located on the map. On top of that, you constantly have to pull up and scroll through a lengthy menu to remind yourself of the details of each challenge, sending your car coasting down the road without a driver to steer it.

It's a shame that outside of rivals mode challenges, which let you race your friends' ghosts after each festival event, single-player and multiplayer are kept at arm's length in Horizon. You have to exit out of the former to get to the latter, because there's no way for a friend to simply drop into your world for some free-roaming fun while you're taking part in festival events. With some tighter integration between single-player and multiplayer, and the sorts of customization opportunities found in car modification (there's no way to create your own race by selecting waypoints on the map, for instance), the free-roaming could have been an absolute blast. As it stands, though, it's fun for a little while, but that novelty wears out quickly.

Horizon may not be as socially capable as some open-world games, but it's still a terrific racer. It's hard to overstate just how beautiful the world is that Playground Games has created. From the foothills of the Rockies to the winding roads that scale desert cliffs, it's an absolute delight to put your car through its paces as you explore every last inch of asphalt. Horizon's occasional missteps may clash with the machinelike precision of the Motorsport games that preceded it, but its ambition and untethered road map more than make up for those faults. This is a game that understands the thrill of the open road, and in delivering that thrill it's an unqualified success.

View Comments (141)
Back To Top
8.5
Great
About GameSpot Reviews 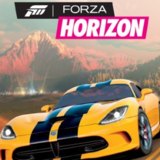