Choosing between one of four ages (prehistoric, medieval, pirate, or space), you must help the green twerps organize falling geometric shapes into a self-styled fortress. Be wary--the red twerps are out to accomplish a similar feat. Once the battle begins, infrequent turret and parapet items will also drop into play. While not integral to your success, these cannon turrets, twerp launchers, and repair stations can make a big difference in staving off your opponent's advances. Two adjacent Tetris fields, a smattering of cannons, a few towers, and carte blanche to fill the screen with bricks--that's Fortress in a nutshell.

To spice things up, the game offers three different gameplay options--battle, blitz, or tournament--and three different difficulty settings. However, besides augmenting the CPU's skill level and elevating the number of points needed for victory, there really isn't much separating one setting from the next. Battle mode gives you a brief pre-combat build-up period, blitz mode throws you right into combat, and the tournament option merely strings together four battles between all four time periods, each more difficult than the last. Although there are no hidden stages or special options to unlock, Fortress does have a lengthy human-vs.-human battle mode--provided you and your friend both have your own copies of the game.

Sadly, single-cartridge multiplayer isn't the only area where Fortress is lacking. The game's visuals and sound, while adequate, don't really take advantage of the GBA's capabilities. Other than a few nifty explosive effects and some wacky speech samples, sensory overload is never an issue. On the bright side, slowdown, choppiness, and flickering are three problems you'll never encounter.

To fully appreciate what Fortress has to offer, you must look to the details. Battles are short--often lasting only two minutes from build-up to completion. For a handheld game, this is perfect. In addition to contending with an opponent, you must also deal with creatures that are native to the age you're trespassing in. Dinosaurs, birds, and ogres don't play favorites when they decide to take in a noontime snack--but they may bend to your will if you complete a wizard tower. There are strategy variations to consider as well. Do you go for the big points by completing large sections early, or do you forgo the big payoff in order to create stable mounting areas for turrets and such? Architecturally, you can build a wide structure to maximize your defense or a tall structure to improve the effectiveness of your cannons. As you acquire weapons, you'll also discover that each of the various catapult, cannon, and laser turret items has its own unique firing rate, trajectory, and destructive capability. Since you can't attack the enemy directly, and since you only get a limited number of turrets, knowing when a weapon will fire is as important as knowing where to situate it.

In the end, Fortress is what you put into it. If you choose not to delve into its subtle strategic nuances, you'll literally feel as if you're just playing a dumbed-down version of Tetris with cannons. However, if launching twerps into the enemy camp or spawning wizards to repair your castle sounds like fun, you just might enjoy this wacky little puzzle game. 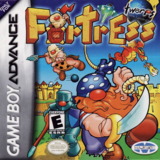 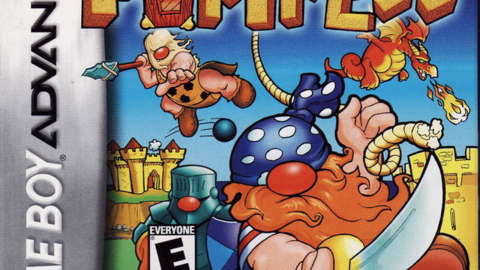