The best part about Fortified is its pulp sci-fi personality. This mash-up of the tower defense and third-person shooter genres plays like the film Mars Attacks! brought to life, complete with Cold War-era alien goons with fish bowls on top of their heads and whirring flying saucers of the sort that made the Earth stand still once upon a time. Sadly, the worst part about Fortified is that this personality is its best part. Gameplay takes a backseat to the congenial story and setting about an alien invasion at around the same point in history when Marty McFly took his mother to the prom. The limited number of bad guys, maps, and overall fresh ideas makes this shoot-em-up enjoyable only in quick, limited doses.

But the concept sure is a winner, at least if you like cheesy sci-fi from a time when everybody liked Ike and feared the Red Menace. Mars has invaded the U.S.A. with a host of flying saucers and clunky robotic minions. Only you can stop them, by selecting from one of four sci-fi archetype classes--the studly Captain, bubble-helmeted Spaceman, fedora-clad Agent, and a flying Rocket Scientist--and heading into missions to both personally gun down the extraterrestrial hordes and set up various defensive structures that aid the cause. Characters seem straight out of a 1958 movie, evoking an early Silver Age comic book feel akin to that of the great Jack Kirby. This old-timey atmosphere is bolstered even further with eerie notes and tunes with action-movie bombast.

Basic game mechanics feature few surprises. Fortified matches are played either solo or co-operatively with up to four players in the main campaign on a dozen missions that unlock in sequential order. They take place on generic city streets that play up the ‘50s Americana setting, which makes for relatively bland level architecture only somewhat jazzed up with treats like iconic movie marquees. Your objective is always to protect a rocket base or two from martians entering the map from one or more points in numerous waves.

Defense is handled in two ways. You run around blasting the martians yourself and also set up allied units in standard tower defense style to stem the alien tide. Money and unit limits are the only governing factor to how you set up these defenses, although you can make adjustments during the breaks between alien waves such as adding new structures and selling those that aren’t working out. Characters gain experience, too, which provides adventure points that are used to unlock new weapons and structures between missions.

Unfortunately, not much is done with Fortified’s novel premise. Weapon design nicely underlines the cheesy sci-fi theme, with ray guns that look like ray guns and special gear for each character like the Spaceman’s freeze rays and the Rocket Scientist’s jetpack. Each character also has a unique “Heroic Power” usable for limited periods of time, such as the Captain’s air strikes and the Spaceman’s freezing Cryodome. But even with these specialized attributes, characters don’t play all that differently from one another. There isn’t much nuance here, as every character has just slightly different ways to kill Martians. Long weapon reload times also get in the way of the budda-budda-budda action. All this delay really does is add a sense of frustration and prevent you from getting into a Martian-slaughtering groove. The one saving grace is that you always have two weapons, and can swap them out when reloading.

Strategic depth isn’t very pronounced, either. Tower defense structures are all pretty useful, and there is a good range of unit types. You can choose from soldiers with rocket-propelled grenades, gun turrets, exhaust vents that freeze or ignite foes, and so forth. Yet even though you seem to have a fair number of options here, all your defenses function pretty similarly in that they always serve to straightforwardly destroy or at least damage and delay Martians. There isn’t much planning required when deploying them, as you always need to establish basic choke points where the aliens enter the maps, usually using weapons that slow down or gradually damage foes up front (like the freeze and fire exhaust weapons) with backing heavy fire from rocket troops or artillery.

But once you’ve seen the first few missions, you’ve pretty much seen them all. The only thing that really changes is the complexity of the Martian assaults, the size of the maps, and how much you have to protect.

Martian enemies come in just a few basic flavors. Most are standard ground grunts, like insectoid drones and various robots inspired by classic sci-fi movies and TV shows. One model looks almost exactly like Robby the Robot, complete with those magnifying glass thingies on both sides of its glassy head. Other models offer a little more innovation, such as rolling balls that turn into death machines on stilts, floating bombs, and iconic 50s-styled flying saucers. Nothing seems to pose any sort of unique threat that makes you dramatically change strategies or units deployed, however. All of the Martian waves need to be beaten with massive firepower, so, again, you don’t need a lot of thought here to emerge victorious.

That said, the maps can be very challenging, especially when playing solo. Even the default Normal setting is extremely tough after you get about midway through the campaign. But once you’ve seen the first few missions, you’ve pretty much seen them all. The only thing that really changes is the complexity of the Martian assaults, the size of the maps, and how much you have to protect.

You can make things tougher by using the Hard or Impossible settings, both of which limit the amount of time you have to make adjustments between alien attack waves. Still, neither alters the feel of the game in any appreciable way. The same goes for the Invasion mode of play. This side game offers incessant Martian attack waves, but is hamstrung by being too similar to the main campaign and because it features just three different maps. Co-op play is probably the way to go here in both the campaign and in Invasion, both because of the difficulty and because the addition of teamwork in online match-ups the tactical element and adds more focus to the shoot-em-up action. With that said, playing with three buddies doesn’t change the character of the game all that much, so killing Martians remains somewhat monotonous.

Fortified feels like a really good start, not a fully realized game. A lot of the pieces are there to make an enjoyable, exciting shooter with solid amounts of action and strategizing--especially when it comes to the lead characters, Martian invaders, and the zippy, frenzied co-op play--but the one-note level design and tactical limitations don’t provide enough reasons to keep coming back for very long. 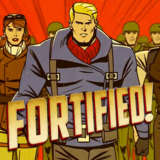 Brett spent about seven hours saving 1950s America from martian invaders, and is waiting patiently for his ticker-tape parade. GameSpot was provided with a complimentary copy of Fortified for this review. 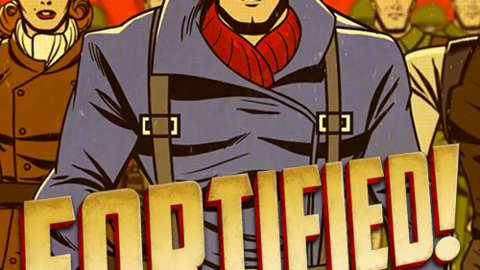 Fortified is an action-packed tower defense game that expands upon the genre by adding third-person shooter mechanics and real-time strategy elements that are used in tandem to save Earth from robotic invaders. Players take control of one-of-four pulp characters as they fight swarms of enemies with an arsenal of Cold War era weapons and experimental alien technology.