Dry presentation aside, Formula One Championship Edition is a good racer that is just accessible enough to newcomers while still being deep enough for longtime fans.

Given how long it had been since the last Formula One game was released in the United States, many felt that Formula One Championship Edition would never see the light of day in North America. Perhaps it's just here because the PlayStation 3 needed some original content, but regardless of the reason, Formula One CE has now been released in the US, and the PlayStation 3 is better for it. The touted rearview-mirror feature didn't make it into the final game, but the visuals look great and the gameplay is quite good.

Rather than focusing on the upcoming season, Formula One CE lets you relive the 2006 FIA Formula One Championship. All of the official tracks and teams are included, as are the drivers that started the season. That means that retired great Michael Schumacher is still winning races for Ferrari. It also means that even though he left midseason to drive for NASCAR, Juan Montoya is behind the wheel for McLaren, and though he actually had his license revoked by the FIA, Yuji Ide drives for Super Aguri. People that don't follow Formula One may not mind the dated roster, but with the game being released so close to the start of the 2007 season, fans hoping for the latest rosters will be let down.

Knowing that it had been a long time since an F1 game was released stateside, developer Liverpool Studios did a nice job ensuring the game would be accessible to someone with little or no knowledge of Formula One racing. The game defaults to the easy setting with the full complement of driving assists turned on. Stability control, braking and steering assistance, spin recovery, and even a virtual racing line that shows the ideal path around the track are all available to ease you into the world of F1. Should you prefer to focus solely on getting around the track, you can turn off pit stops and car damage. As you get more comfortable with the controls, you can turn off individual assists, which makes the game more realistic and challenging. The controls are simple and responsive, which is a must in a game that demands precision at all times. If you like, you can use the Sixaxis tilt controls to steer by turning the controller in the direction of your turn. This method works OK, but it isn't always as responsive as the analog control. Several Logitech racing wheels are supported, as well, and they work fine, though none of them offer any sort of force feedback.

Basic game modes include quick race, time trial, grand-prix weekend, online, world championship, and career. Online play lets up to 11 people race at once; you can even round out the field with computer-controlled drivers. It would have been nice if online leagues were supported, but the online play that is here runs great and is easy to use and set up. If you're looking for a little more depth, you can take an established driver through a year on the circuit in world-championship mode.

You can also embark on a five-year career with a created driver. Like many aspects of the game, career mode is simple enough that beginners can figure it out while still offering enough options to satisfy series veterans. You'll start as a driver without a team, and your agent books trials with lower-tier teams in need of a driver. If you perform well enough, you'll be offered a position as either a primary driver or a test driver. You can accept the team's offer or try your luck with any other team that may be interested in your services. Gearheads may enjoy being a test driver, but running solo laps against the clock isn't very exciting and the lap requirements are often pretty tough to meet. Once you've come to an agreement with a team to be the primary driver, you're given a series of goals for the season, such as average starting and finishing position, as well as where the team would like to finish in the Constructor's Championship. Your team and agent will keep you informed of your standing by e-mail, while series news is distributed via fake, but well-written, news articles. You can find out who is the favorite coming into a race, read about the race results, and keep an eye on what other drivers are up to.

Once you've gotten the business aspect of racing out of the way, it's time to head to the track. When you select the start grand prix option from the career mode's main screen, you're given the option of participating in "race car evolution." Here, you drive around the track, the CPU makes adjustments to your car, and then you drive another lap to see how the changes affect your car. You can still make changes on your own, and you don't have to do test laps, but this is a great way for beginners to get to know how different settings can change a car's performance. Once your car is set up how you like it, it's time to qualify for the race. Qualifying is broken into three sessions. Every car must complete one lap during a 15-minute session, and at the end of the session the slowest six cars are placed at the back of the field. The next session fills the next six spots, with the final session completing the field and deciding pole position. In theory, you only have to complete one lap for each session, but because starting position is so vital, you'll want to complete as many laps as it takes to earn a position near the front of the grid. Qualifying this way is fun, but between testing your car and qualifying, it often feels as if you're doing more practicing than racing. That may be how it is in real life, but real life isn't always fun, and neither is practicing all the time.

Finally it's time to hit the track for a real race. The races are fast, incredibly intense, and always challenging. Even on the medium difficulty setting, the game demands precision driving if you're to challenge for a top position. Passing is difficult, so you'll need to know the track, be patient, and then be ready to execute a pass the moment an opening presents itself. It's extremely satisfying when you're able to pass another driver. The relative lack of passing opportunities presents a problem when you're racing just a fraction of the real race distance, which you'll probably be doing unless you've got a few hours to kill. When you're racing a five or even a 10-lap race, there simply aren't enough passing opportunities, especially if you qualified near the back of the field. This isn't Burnout, so weaving in and out of traffic like a madman isn't an option. Thanks to a penalty system that forces you to drive at low speeds if you're caught cutting corners, you'll need to stay on the pavement at all times. You'll also need to take care not to damage your ride, as the slightest impact with a wall or vehicle can send one of your tires rolling down the track without the rest of the car...which is bad. If you've taken a bit of damage, or you just need some fuel, you can head to the pits. Rather than just watching your crew work, you'll need to watch for button sequences that pop up onscreen and then press the proper button as quickly as possible to get out of pit row as fast as you can.

One thing Formula One CE has in spades is speed. The sense of speed is almost overwhelming at times. The screen will blur, the camera shakes, and you constantly feel as if you're on the verge of a horrific accident, particularly when you're racing in a pack. The frame rate is fast and rock solid, even when multiple cars are onscreen. As much as you'd like for the frame rate to slow down a bit when it's raining, even the amazing rain effects don't cause so much as a stutter. This means you're forced to rocket around the course blinded by the mist from the cars in front of you and the droplets of rain running across the screen. It's awful because it's so hard to see, but at the same time it's awesome because it looks so realistic.

The cars look nice and are detailed enough that you can tell who's in front of you, even at breakneck speeds. There aren't a whole lot of major crashes, but when there is an accident, cars display damage in a realistic, if not a bit understated, manner. In fact, the crashes are just one example of the game's somewhat dull presentation. For the most part, everything is very clinical. The menus are easy enough to navigate, but they present information in a very matter-of-fact way. Outside of some horribly lame podium celebrations, the actual presentation of the races is very sterile, too. Each of the game's 18 courses is accurately re-created, but after a while, many of them start to look the same. There are some standouts, though, such as Circuit de Monaco that winds through the beautiful streets of Monaco or the Melbourne track, which has the city's skyline as a backdrop.

Formula One CE nails the one audio component that it needed to--engine noise. The high-pitched whine of the cars sounds fantastic, especially when you're surrounded by speakers listening to the game in Dolby Digital. Unfortunately, the rest of the game's audio isn't as enthralling. A somewhat bored announcer calls the action, but he repeats himself quite often and only offers the most basic commentary. Having music to listen to while you race certainly wouldn't add to the game's realism, but with all of the practice laps you'll be doing, it would have been nice to at least listen to a custom soundtrack.

If you're an F1 fan and you own a PlayStation 3, picking up Formula One Championship Edition is a no-brainer. The racing action is intense, the controls are solid, and while the rosters are quite dated, it's an overall good representation of the sport. If you haven't enjoyed F1 games in the past, you probably won't find much here to change your mind, but if a steep learning curve is what has kept you from previously taking the plunge, the game is friendly enough to beginners to make it worth a look. 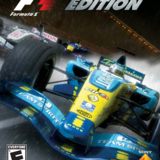