F1 98 is a terrific F1 sim, but time goes on, standards grow higher, and we yearn for something more.

The fourth PlayStation title in Psygnosis' series of Formula 1 sims, Formula 1 98 continues the franchise, adds some new features, refines a few old ones, blows it on a few minor details, and... is still really hard to drive.

Graphically, this is prettier to look at than the last effort. Cars are more solid, with fewer obvious polygon problems. While Formula 1 Championship Edition's cars seemed to vibrate in place, F1 98's are so smooth and even, they almost have a cartoon-like quality. The detailing on the trees is superior to last year's, though the level of pop-up is comparable. There is however a slight but present visual distortion to the track immediately in front of the car. Space appears to be slightly curved around the map portion of the screen. Most irritating is a horizontal crack that appears and disappears sporadically about five feet in front of the car. But the car itself looks great, right down to the treads. There are still no rearview mirrors; Psygnosis cites the need to fully render two images instead of one and the increased overhead's adverse effect on the game's speed - it would slow everything way down - as the reason for this omission. If you press the D-pad down, you switch to a rear view, but in practice this is awkward and not useful in preventing enemy passing.

F1 98 handles better than last year's model. Both the arcade or grand prix modes still understeer horrendously, so winning races requires a heavy dose of powersliding, which isn't necessarily appropriate to Formula One racing - I thought these cars were supposed to take turns at very high speeds without batting an eye, but.... It was almost impossible to take the smallest curve without slowing to 30mph in the grand prix mode of last year's offering; this time it's doable. The modes are a little less divergent this time around too. The main difference seems to be the depth of hot water you get into when you start to slide. Recovery is nearly impossible in grand prix mode, with cars hurtling down the track, 90 degrees out of phase. Practically the only time the cars oversteer is when you try to right them once you're in the dirt, which can feel more like punishment than realism as you spin out every which way.

The cars still sound a little weird although less like motorcycles than they did last year. And the all-important commentary? Rest assured, it's still performed by Murray Walker and racing giant Martin Brundle. They've got a wider vocabulary of comment this time around. Unfortunately, it still comes out late or just plain wrong a lot of the time. There's nothing more annoying than getting back on the track just in time to be told you've gone completely off it. And when you're missing an entire wheel, and Mr. Brundle tells Mr. Walker that he thinks he's overestimating the significance of the damage, well, it would be nice if it weresarcasm, but I just don't think it's that smart. Track overviews make a much more useful application of the voice-overs. Looping video of each track is available, from inside the car. It's just like a replay, only Murray Walker's voice guides you through the different pitfalls of the individual track, recommending speeds, brake points, and noting the most troublesome chicanes. Because it's a loop, you can memorize the location of each track's trouble spots before even settling down for a trial run. It's a more productive practice since it's easier to memorize the course when you're spared the trouble of driving. And some of those chicanes are way too small for you to ever see them coming on the map. Very cool.

Ultimately, the Formula 1 series excels as a sim series in a world of arcade racers. Though there is some debate as to just how realistic the various options are, they're all there for you to tweak to your heart's content. Front and rear down-force, tire density, size of brake discs, etc. It's all here. And with F1 98's better handling, it's easier to notice the difference a little tweaking makes. Each of your car setup options can be tweaked in the pit. It's not quite on-the-fly, but it's the next-best thing. Besides, on-the-fly car tweaks wouldn't be realistic, now would they?

In the final analysis, Psygnosis has created another fine racing sim. F1 98 is certainly a superior product. Why then do we feel let down? Well, it's just that after so many tries, you've gotta wonder why they can't make it perfect by now. Make a Formula 1 sim that's every bit as realistic as Gran Turismo, every bit as fast as Need for Speed III, and smooth like Automobili Lamborghini. F1 98 is a terrific F1 sim, but time goes on, standards grow higher, and we yearn for something more. 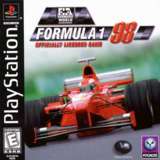