I constantly yearn for an unfamiliar experience, one that forms the basis for a new game genre or at least combines a few established standards to produce something pleasingly different. Forced, a PC game that deposits you in an arena for some cooperative mayhem, attempts the latter feat and very nearly succeeds until it dedicates itself too fully to the quest to offer a challenge.

In Forced, you and as many as three other friends puzzle and battle your way through a series of arena trials. There are some gorgeous environs, featuring sunny walkways, shifting sand, lush jungles, and other elements that don't even feel like they ought to be part of an arena setting. You receive a crystal for each new victory in those fantastic corridors, and the gathered baubles grant access to new skills. Trials you've already cleared also offer additional challenges and treasure if you return to them and work to master them. Once you clear most of the challenges a given section of the arena has to offer, you can choose to engage the local guardian, but you're typically better off waiting to brave those epic confrontations when you have more skills at your disposal.

The game begins with a brief tutorial that introduces you to the combat system. You learn that there are four types of weapons, each suited for particular trials, and that you can switch to a new one before tackling each area. Then you discover how to interact with your friendly guide, a floating orb that houses a spirit named Balfus. At first, that sentient orb might seem like a simple distraction from the meat of the game, but your luminescent friend is actually the game's most important component. For better or for worse, he's the reason that Forced is more than just a basic brawler.

Balfus is relatively easy to control. You press a button or key to summon him to your warrior's current location, or you hold it to command the orb to follow you around as you slaughter enemies and interact with the environment. That's all simple enough, but there are complications. If Balfus floats over a glowing torch, he temporarily gains new abilities. For instance, he may develop explosive properties that allow him to produce a blast when he touches an object, wall, or enemy. If he passes over a different torch, he might instead acquire increased movement speed or the ability to temporarily heal your wounds. You can activate multiple buffs at once, if you like.

While the partnership between the hero and the orb is interesting and allows for unconventional tactics, the trials built around the dynamic sometimes demand too much from you. Shortly after you topple the first boss, for instance, you're forced in a subsequent trial to move several large blocks across a sandy desert area by summoning the orb so that it slowly drags along the granite anchor. Your goal the first time you encounter this situation is to activate plate switches. Soon, you must use the same technique to produce a mobile shield that protects you from deadly beams of light while also dealing with an inconveniently placed switch that opens a gate. In the likely event that something goes wrong, you die instantly and lose a few minutes of progress (unless you are in a multiplayer match and a friend avoids suffering that same fate). You might not meet your demise until right near the end of the stage, which means you have to retread several minutes of familiar ground just to get back to the spot where you died. Then you could easily die again because you're required to keep so many moving pieces working in concert. It's maddening.

At the moment, the game suffers from connectivity issues that prevent many players from joining games.

Rather than focusing on puzzles or brawling alone, many stages combine the two elements in a way that prevents a single player from having a moment to breathe, even if he or she isn't worried about clearing everything quickly enough to earn an extra crystal. Weak foes are in some respects the most dangerous ones, since they can knock you out of range of a protective barrier (which leads to a swift death) or prevent you from moving quickly enough to eradicate a developing threat a short distance across the map. They soon begin spawning regularly enough that you can't possibly stop to deal with them all, and eventually they overwhelm you like piranhas swarming a leg of mutton tossed into the river. Load screens advise you to keep moving to avoid such foes, but you're regularly forced to remain in a given location to keep weight on a pressure plate or to destroy a durable piranha plant or some other chore. As the only hero, that’s an overly delicate balance to maintain.

You fare better against such threats once you memorize each trial and learn what triggers a new wave of foes, but all the memorization in the world won't see you through the later trials unless you gather crystals so you can assign the best innate abilities and special skills to your character. The variety of abilities that accompany each individual weapon keeps things interesting, but you can only access useful skills by clearing challenges that are difficult to survive until you have more abilities. It's a vicious circle, and progress often comes quite slowly.

Between the skill customization and the requirement that you constantly monitor and interact with Balfus while completing trials, you may initially feel overwhelmed by everything you are expected to keep straight. The cooperative mode alleviates that by allowing you to tackle the same stages with a friend. Having allies along doesn't necessarily make things any easier, though, because Balfus becomes community property and takes orders from anyone. Combatants may wind up tugging him every which way and getting nowhere in the process unless players use an external service for voice chat.

Worse, allies might accidentally cause harm to one another. It's all too easy to summon the orb toward a statue and then be forced to watch helplessly as it connects with one of your friends along the way and explodes before you have time to react. With multiple gladiators questing at once, it's possible to respawn within a trial if you meet an untimely end, but there's a lengthy delay before that happens, and you fail the trial if everyone is ever down at once. Your best bet is to play with a bunch of experienced friends, at which point the game morphs into a true delight. At the moment, however, the game suffers from connectivity issues that prevent many players from joining games, with proposed solutions including the installation of third-party software that still doesn't seem to address the issues.

Forced offers some unconventional mechanics and an assortment of creative mission objectives, tied together by attractive environments that are pleasant to explore right up until the moment they turn on you. It's a challenging game with built-in reasons to revisit familiar areas, but it's also too demanding for its own good, and the results are more frustrating than satisfying. The game is meant to be played cooperatively, but while connection issues remain, you're likely to muddle through on your own. It's difficult to recommend any game that you endure rather than enjoy, even one this unique.

View Comments (11)
Back To Top
5
Mediocre
About GameSpot Reviews 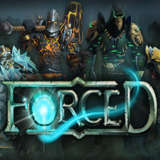 Jason Venter lost himself in challenging arena battles and in matchmaking menus for more than a dozen hours, conquered numerous trials, and still cringes at the sight of a horde of swarmers.