Chickens in games are seldom ever funny, let alone charming. They're only appealing if you go all out with the chicken theme like Billy Hatcher and the Giant Egg, or if they serve a practical purpose, like the Cuccos from The Legend of Zelda or the eggs from Resident Evil 4. In Fluster Cluck, developer Loot Entertainment assumes that chickens are both universally appealing and deserving of an introduction by a loud, obnoxious M.C.

Loot Entertainment prescribes to the notion that chickens are not only funny, but doubly so when you're turning non-chickens into chickens. That's the crux of Fluster Cluck: deliver more creatures into a chicken-conversion device than your opponents. The ability to shoot down your competitors while you're carrying an innocent horse or camel is about as complex as the game gets. It's frustratingly unfortunate that all the other parts that make up Fluster Cluck cannot adequately support such a simple and straightforward concept.

Fluster Cluck's maps are devoid of imagination; Loot Entertainment's best designs and layouts are comparable to the least inspiring maps from refined multiplayer game collections like Nintendo Land and the Rayman Raving Rabbids series. That means these arenas fulfill the bare minimum requirements that constitute marginally interesting maps: multiple levels, a mix of narrow paths and open spaces, and non-symmetrical geography. Note that these attributes do not apply to every map in Fluster Cluck, just the entire playlist as a whole. Furthermore, the poor placement of spawn points and power-up wells do nothing to help these uninspired maps. Respawning on one of only two spots on a given map makes for a teeth-grinding session when, in the final minute of a match, that part of the arena has been cleaned out of victims to pick up. The A.I.'s aggressiveness and its focus on delivering creatures to convert leaves you no choice but to focus on chicken conversion yourself and ignore the remotely placed power-ups. It's just as well, since the potency of these enhancements offers close to nothing compared to a well-aimed salvo of the primary weapon.

Between the pervasive winter of the most recent Dark Souls II add-on and the dank sewers of Outlast, recent games have proven that familiar game settings can still engage the player as long as there's creative vision molding these environments. By contrast, Fluster Cluck underscores the generic aspects of these go-to surroundings. When you start from a pair of lush green pastures in the first two arenas and progress to the bright sands of Fluster Cluck's deserts, which are of course accompanied by mundane and familiar Middle Eastern game music, you just can't help but anticipate that the fire level is just around the corner (spoiler: it's the obligatory zombie-infested urban wasteland instead).

Somehow, these aren't the worst facets of Fluster Cluck's arenas, as the game's greatest test of patience involves the levels' pipes. As Super Mario Bros. taught us, pipes and similar kinds of passages can add a lot to an otherwise ordinary level. With Fluster Cluck's speed of play, the pipes work like portals in Portal, with no transitional sound effects or brief pauses. This does not work well in an arena, especially when there's only one passage to the map's goal. This is doubly upsetting when you have enemies on both sides of the pipe, bumping you like a helpless pinball in and out of the two sections connected by the pipe. It's not fun when the most sensible way to get out of such a tough spot is to die.

Bumping against and shooting down your enemies make up the bulk of your interactions with others. They're aggressive, but also predictable, often taking the most direct routes to the chicken converter. This leaves you with a decision: Do you charge into the scrum at the risk of getting toasted, or do you go off the beaten path at the expense of time? You should also consider the fact that any downed opponent can also be converted into a chicken, including yourself. Having to make these judgment calls every few seconds should make for stimulating play, but the high likelihood of dying every 10 to 20 seconds in a match infuriates more than it motivates. And even if you do win, you feel relief without the joy of victory.

Fluster Cluck is sorely in need of an interactive tutorial, which would have been highly preferred to the rushed video rundown the game offers, an instructional clip that also serves as the game's opening cutscene, and one that unwitting players might skip in a hurry to get into the action. Moreover, the distastefully roaring narrator is under the impression that we're in the mid-'90s, when all manner of youth-targeted marketing was "Extreme!" Such delivery was tolerable at best back then; it's simply abrasive today.

As the Smash Bros. series has proven time and time again, unpredictably and chaos can yield addictive results, provided there's great game design behind them. Admittedly, repeat playthroughs and thoughtful study of each map in Fluster Cluck allowed me to wade through the disorder, making me a better player. Yet that road to enlightenment was paved with boredom and frustration, which left me emotionally spent by the time I cleared the final map. Not counting massively multiplayer delivery quests, my top benchmark for delivery-style games is still Choplifter. Fluster Cluck can be found at the opposite end of that spectrum. 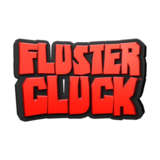 Miguel needed five unfortunate hours to clear Fluster Cluck's single-player mode and managed to convince three friends to suffer with him for two hours on couch multiplayer. His most recent meal at KFC was delicious. 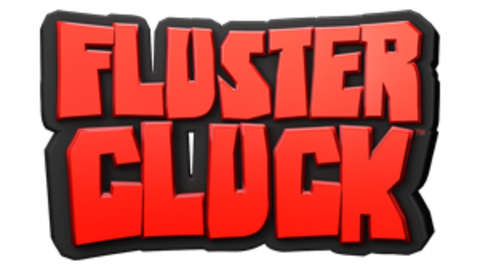 Fluster Cluck is a frenetic, tongue-in-cheek, dual-stick shooter that places gamers in the roles of out-of-this-world Chikkin Koop employees, working their way up the ranks of the fast-food pyramid bureaucracy by chikkinizing everything in sight. Players must gather resources by abducting cows, camels, zombies, and even their co-workers... turning them all into tasty - but flustered - chikkin.