It might not offer enough new stuff to make it worthwhile for owners of FlatOut 2, but Ultimate Carnage is still a riotous racer in its own right.

The newly released FlatOut: Ultimate Carnage is actually just a reworking of 2006's demolition racer FlatOut 2. It's got the prerequisite shiny new graphics and additional on-track carnage. However, it also comes with some new modes and vehicles to help flesh out the package a bit more. While you can't help but feel like developer BugBear might have just been better off making a proper FlatOut sequel instead of reheating its last game, the upgrades made here are significant enough to make the game stand on its own.

For those who are not in the know about this FlatOut business, the FlatOut series is all about demolition racing. Whether you're bashing opponents into trees while crashing through walls of tires and leaping off rooftops in standard races, getting your crash on in straight-up demolition derbies, or flinging the driver of your car through your windshield into a set of bowling pins or a series of flaming rings, one theme remains constant throughout: wrecking everything--and wrecking it good. Arguably, FlatOut 2 wasn't quite as entertaining as its predecessor because the game took the series in a slicker, less grimy-feeling direction. The grit and dirty destruction of the first game were sanded down, until all that was left was an offroad Burnout clone. But as luck would have it, offroad Burnout is still pretty fun.

The good news is that Ultimate Carnage takes the groundwork laid by FlatOut 2 and improves it by a good measure. If you ever played FlatOut 2, you'll notice the difference the second you lay rubber to the track. The visual upgrade is more than just the standard upscaling of the existing visual assets. Apart from basic upgrades, such as improved lighting, as well as better smoke and water effects, BugBear has vastly improved the look of on-track action. Cars are much more detailed (and there's more of them on the track now, with up to 12 drivers instead of the previous eight), and the wrecks are far more elaborate. On the track, there are tons of objects to knock around and break apart, considerably more than in FlatOut 2. It's customary to see tracks completely littered with tires, logs, broken glass, shopping carts, lamp posts, shorn car parts, and all manner of other destroyed bric-a-brac by the time you reach the last laps. The sheer dynamism of the game's destructible elements is quite impressive, and that fact that the game runs at such a smooth clip while all this carnage is going on is also a big bonus.

As excellent as the racing looks, it doesn't always play quite as wonderfully. BugBear definitely could have stood to improve the way the cars handle. There are three car classes in the game: derby, race, and street. The problem is, except for the expected differences in speed, none of the cars handle all that differently from one another. Size is really the only major difference, and even that is purely cosmetic (big trucks trump small racers in crashes, and so on). Each car has several ratings in categories, such as speed, acceleration, strength, weight, and the like. All of these categories can also be upgraded via new parts in the FlatOut mode, but even these upgrades lack a measure of tangibility. Again, you notice differences in speed, but no matter how much you crank up the handling rating or the weight rating, you'll still feel like you're driving the same basic car across the board. That might be OK if the cars didn't feel so floaty and generally off-kilter from the outset. You'll get used to how the cars feel as you play, but something about this feel combined with the lack of true differentiation among cars makes the racing less interesting than you might hope for.

Car handling quibbles aside, you will have fun with FlatOut: Ultimate Carnage. After all, there are so many different ways to play it that you're bound to enjoy something. FlatOut mode is the game's career mode and hasn't been altered much from FlatOut 2. You start out with a clunker of a derby car, race through a series of unlockable events, unlock new car classes, buy more cars, buy upgrades, and progress as you would through any standard career mode in a racer. Stunt mode also hasn't been upgraded much, though the stunts are still a blast to play. All the stunts revolve directly around launching your driver, be it in a game of high jump, long jump, bowling, basketball, baseball, or royal flush. It's all about setting the right angle for your driver's launch and sending him hurling toward whatever object the game requires for maximum points. There's a great variety of these games, and they're a blast to play in the game's party mode.

It's not all old hat in terms of features because there are some new race types and modes in Ultimate Carnage. One new mode addition is the carnage mode, a second career mode of sorts that revolves around a series of challenges taken from all the various race and stunt modes. These include the new race types found in the game, such as beat the bomb, which is a race where you score points by going as far as you can before a ticking clock with a bomb at the end of it runs out; carnage race, which is like a standard race, except you score points by wrecking the scenery and other cars; and deathmatch derby, which is like a standard demolition derby, but with time-based matches and the goal of getting as many kills as you can before time runs out.

All of these can also be played online, and that is really where Ultimate Carnage shines. Offline racing is amusing, but getting online against other players, especially in some of these new modes, can be downright awesome. Online performance seemed solid in our testing, and with the game already having been out in Europe for quite some time now, there's already a strong online community to play against. Incidentally, there's no split-screen multiplayer of any kind in Ultimate Carnage (there was in FlatOut 2), so if you want to play against people, it'll have to be online.

What it's ultimately going to boil down to with FlatOut: Ultimate Carnage is whether you already bought FlatOut 2 or not. The new content in Ultimate Carnage is unquestionably a big step above FlatOut 2, but what is questionable is whether it's enough to justify paying another $50 for a game that, for as much as it's changed, still feels extremely familiar. If you never touched FlatOut 2 and are looking for a crash-happy racer, Ultimate Carnage will absolutely fit the bill. If you already took the plunge previously, think about whether upgraded visuals and a few new gameplay modes are enough to justify a second purchase. 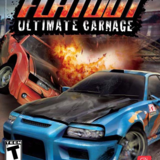 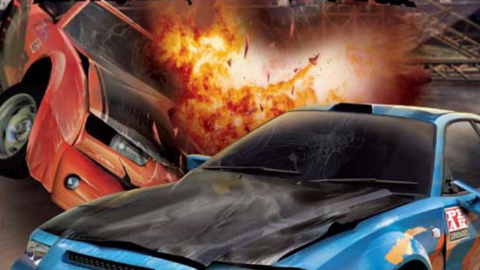 Race around at high speed and crash to cause spectacular damage in FlatOut's Xbox 360 debut.