For those who just want to race fast, wreck hard, and look good doing it, FlatOut fits the bill.

After last year's thoroughly disappointing Test Drive: Eve of Destruction, it seemed like the notion of the demolition racer had all but gassed out in this day and age. After all, what fun could it be driving around big, ugly, clunker cars in silly wreck-oriented races when something like Burnout 3 demonstrates how much more fun car wrecks can be in sleek, sexy, ultrafast machines? Thankfully, there is yet hope in the form of European developer Bugbear's FlatOut, an over-the-top demolition racer that is heavy on the physics and light on the realism. These cars drive a lot faster than your usual derby car, but they're just as delightfully low rent in design, as are the many different racing environments you'll find yourself crashing all over. FlatOut is hardly a slam dunk, as it leans too heavily on its unique physics gimmicks for its own good. And admittedly, there isn't a whole lot to this package beyond basic (and occasionally frustrating) arcade races and a complementary multiplayer component. But, for those who just want to race fast, wreck hard, and look good doing it, FlatOut fits the bill.

FlatOut is destruction racing to the very core, throwing aside any superfluous story elements or anything similarly goofy for the sake of just making a pure arcade racer. When you first boot up the game, you're offered a career mode, a quick race, a time trial mode, and multiplayer. Career is where you'll spend much of your offline time and where you'll buy your first car. Initially, you're presented with a few decidedly slower vehicles, but as you move through the career mode, new classes will unlock and each one will get progressively faster. Plus, you can buy tune-ups for each ride that improve speed, horsepower, traction, braking, and all the other usual upgradable stats you'd find in a racing game. The career mode is really just a long series of races within different circuits: bronze, silver, and gold. You don't even necessarily have to win each and every race to unlock the next circuit, but you do have to place at least third in all of them to make sure you earn a medal. Placing higher will earn you more cash, which you can subsequently use to buy more tune-ups and cars, but you can usually earn enough money just by earning a medal. While this way of doing things does shorten the experience a bit (not having to win every single race), there are nearly 40 races in all, so there's always the bonus races to keep you busy.

The bonus races are effectively a collection of straight-up destruction derbies, races on tracks that seem specifically geared toward maximum destruction (for example, a figure-eight course), and a bunch of minigames that make specific use of FlatOut's biggest gimmick: the ability to launch the driver of your car out of the front windshield. This acts as a sort of pseudo punishment in normal races when you wreck too hard (as it takes a few extra seconds to let your car reset back on track), but in the minigames, you're presented with either a gigantic dart board, a high-jump meter, a set of bowling pins, or something along those lines, and a track with which to drive your car up. By pressing a button right before the end of the track, you can set the angle of the driver's launch, and then once you let go, he or she will go flying from the windshield toward the awaiting pins, boards, or what have you. What makes these games so entertaining is the ridiculous rag-doll physics Bugbear has given your drivers, making them contort in horrifically hilarious ways that never fail to make you cringe, even if just a bit. With that said, the minigames do have a limited life span of entertainment, as once you've broken all the records, you can really only watch your helpless driver shatter every bone in his or her body so many times before it becomes a tad repetitive (which is not something we ever thought we'd find ourselves saying, but it's true).

The actual driving mechanics of FlatOut aren't terribly complex or deep, and they rely pretty heavily on lots of powersliding and crazy smashups for entertainment value, rather than on any real racing strategy to speak of. Fortunately, it works...at least, it works well enough. The faster cars in the game can get up to some pretty crazy speeds, and the handling of the cars, though very loose, is pretty manageable once you get used to it. The whole thing of launching your driver out of the car does get old, as we've said previously, but it only happens during the most brutal wrecks. With the punishment of losing precious time by inadvertently sending your driver flying to his doom will be constantly hanging over your head, you might find yourself being a little overly cautious when taking sharp turns. But, you shouldn't be afraid to rub against the scenery or other cars--after all, rubbin' is racin'. Plus, FlatOut's racing model awards you a degree of boost for smashing up the scenery and your opponents. It might seem somewhat counterintuitive to be rewarded for breaking your car, but only the most severe wrecks really incapacitate you, and frankly, considering how great the wrecks in this game look, it's hard to not want to do it.

Everything in FlatOut breaks apart. Cars deform to a spectacular degree, bodies scrunch up bit by bit with each progressive wreck, bumpers sheer off, and sparks fly every which way. Tracks are similarly destructible. You can smash through big wooden signs, send stacks of tires and nearby barriers flying, and leave big chunks of the scenery all over the track to become dangerous obstacles for the next lap. Actually, if there's any one complaint to be lobbied at the level destructibility, it's that some of the debris can be pretty easily driven over the next time around with little consequence. Most often it will be the smaller stuff that you can drive over, but you will encounter some sizable pieces of junk that you'll definitely want to avoid.

It would have been nice if there had been more variety in track design and car design in FlatOut. For sure, this is a great-looking game with some excellent car models and track environments, but there just aren't enough of them. Most cars handle exactly the same, and though there are a few notable differences in aesthetic design, there aren't any truly outlandish vehicles to play around with. There are really only five or six different racing environments, with multiple track layouts for each (some of which really just feel like previous tracks in reverse). The PC version of FlatOut is the clear-cut graphical winner, especially if you have a higher-end PC, as the graphics are almost astonishingly sharp when turned to a higher resolution. The graphics look really nice at a lower resolution too, but they are more comparable to those on the Xbox version, which also look great despite being a little bit blurrier than the graphics on the PC. The PS2 version is predictably rougher around the edges and not nearly as dynamic looking. However, it runs very smoothly with no more frame rate slowdown than the occasional bouts the other two platforms are also subject to (and it still looks pretty great for what the PS2 is capable of).

The best aspect of FlatOut is its multiplayer. It is neither the deepest nor most involved racing multiplayer mode ever put on the PC, PS2, or Xbox, but the races are just a blast when you've got a full eight people going in a regular race or a demolition derby--at least, on the PC and PS2. The Xbox version is inexplicably missing demolition derbies online. And for that matter, the PC version is perplexingly missing online, period, relegating you to LAN play only (dumb move, considering how much fun the online can be). Anyway, the main reason the multiplayer is so much more compelling than the single-player racing is because the opponent artificial intelligence offline is pretty hit or miss. The game suffers from some very noticeable rubber-banding, and your opponents are seemingly always right on your tail, ready to overtake you. Fortunately, you're never out of a race completely, as the AI is just as prone to hitting rails, trees, and other destructive bric-a-brac as you are. They're also extremely aggressive, which will probably lead to at least a few moments of extreme frustration as they constantly nudge and push you into a rail, causing your driver to inadvertently flee the scene, so to speak. Overall, you could call the opponent AI serviceable, but not exactly great. But, again, the multiplayer significantly makes up for this shortcoming, since it's so much more fun when you've got people to play against.

Since FlatOut was developed in Europe, it's not altogether surprising that the soundtrack comes from a lot of artists that North American players might not have ever heard of. What is kind of odd is that all the bands that have been culled together for this game all sound like they're trying to do their best impersonation of generic American alternative rock. A few of the tunes are legitimately catchy, but for the most part, they just kind of fade into the background as you play. On top of everything else, the lack of custom-soundtrack support on the Xbox or PC is pretty annoying. The rest of the sound effects are all quite good, though not any better than most other competent racers on the market.

FlatOut would be a whole lot easier to recommend if certain aspects of its package were tightened up. The merely mediocre artificial intelligence, the weirdly sporadic multiplayer features across platforms, and the repetitive driver-launching mechanic are probably going to annoy the hell out of some people. But if you can look past some of these flaws, the game's delightfully unscripted core racing mechanics can be a lot of fun, especially when played against others in a multiplayer setting. As it is, it's a very good game that falls just shy of greatness, and serious demolition racing fans would do well to check it out. 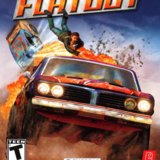