Fails to fire on all cylinders.

For a game with the words "Total Insanity" in its title, it’s fair to expect a certain level of madness around every corner. The Flatout series' cornerstone has always been chaos on the racetrack and Total Insanity certainly is chaotic. Being Kylotonn Games’ first Flatout, it makes sense that it would stick to the tried and tested formula. And it works, to a point. Races and the spectacle that ensues are wild and unpredictable in the ways they should be, but beyond the updated visuals, the overall package comes with a mess of annoyances. Uninspired presentation--poor music, bland menus, terrible engine tones--blends in with merciless AI and a broken sense of progression to make Flatout 4 seem more flat than fantastic.

As is standard in Flatout games, the aim of Flatout 4 is to race hard around a variety of open roads littered with objects to smash your way through, Demo Derby-style. You can do this a few different ways: career, Flatout mode, quickplay or multiplayer--either couch competitive or online. Car handling is simple but wildly inconsistent, allowing easy slides and handbrake turns but also leaving you at the mercy of the track. You might run over a small bump and not notice it one lap, only for it to roll you over the next. The AI racers are utterly ruthless--perhaps too much so--as they fling all sense of self-preservation out the window in relentless pursuit of destruction. It’s a common sight to see an opponent fly overhead, upside down and facing backwards, crashing into the side of a house and bringing it down around them, only to land on their wheels and speed off. It’s moments like this where the stars align and, just for that split second, Flatout 4 feels right. But that feeling never lasts long, quickly turning to angst at the idea of having to repeat the same races over again.

Of the four main modes, Flatout is by far the best, offering a series of challenges combining race, survivor and stunt events. It’s the mode that makes the most sense as it’s the easiest to get into, serving up a varied mix of race types, from standard races to the weaponised assault races, as well as different stunts and time trials. The cars are picked out for you, and the collective points you earn from each event tally up to unlock new ones. If only the same sense of urgency in getting you amongst the action existed in the other modes.

The career attempts to add some depth in the form of car purchases and upgrades, but the rewards it doles out for winning races versus taking down opponents is diametrically opposed, making progressing through each championship feel like a hefty grind. Points from wins unlock more races while cash, of which you earn a small amount for winning but a much larger amount for taking down opponent’s mid-race, lets you buy better cars to race with. Often, especially early on, I felt like I was forced to make a choice between going for wins or takedowns; compromising between cash for new cars or points for new races, which is a weird choice to have to make. Rewards do get slightly better as you progress, but getting there is a slog.

The only way to unlock new cars is by winning consecutive gold cups, which is excessively demanding for a game that already asks a lot of you. Cars aren’t just locked for career mode either, but most of the tracks and cars in quickplay are also inexplicably locked, with no indication as to how to change that. During the career, had the early game rewards and unlocks been more lenient, a new car or two could’ve spiced things up, at least for a few races. But thanks to the repetitive nature of the tracks, frugal rewards just add to the grinding nature of the game.

At least when you jump online into Flatout 4’s multiplayer, you get access to every car and track, giving you an opportunity to test out the differences in each. Vehicle handling varies considerably, to the point where, if you play the game long enough, you’ll want to exploit a different car for each track. Online multiplayer is fun in the right company, but some glaring omissions make it hard to come back to. The lack of bots to fill out empty spaces means, unless you have at least three other friends with Flatout 4, it might make for a pretty lonely experience. Public lobbies exist, but they have been practically empty since release day.

Visually, Flatout 4 impresses but doesn’t dazzle. God rays poke down through the trees while sparks scatter brightly as cars rub and scrape, and there is no shortage of trackside details to smash through. It aims to hit 30 frames per second, but at least does so consistently, only dipping at the very start of a race when all the cars are bouncing off each other and exaggerated track particles are flung back into your face.

Flatout 4 doesn’t bring anything noteworthy to the series, and while the Flatout and party modes are good for some low stakes enjoyment, the grind of single-player progression is too much to bare. The challenge is borderline unfair at times, and that wrecks the partytime nature that the series used to do so well. 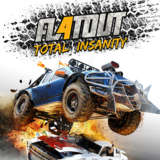 A veteran of racing and driving games, James put nearly 15 hours into all game modes including the career, Flatout mode and quickplay and multiplayer, and even convinced his fiance to try out the party mode in split screen. The PS4 review code was provided by the publisher.