FlatOut 2 seems a little too slick for its own good in spots, but it still manages to provide plenty of destructive racing fun.

As much fun as the Burnout series of racing games can be, sometimes you want something a little grittier and grimier than the glossy, pristine-looking races that series has had on offer in recent years. Enter last year's FlatOut by developer Bugbear, a demolition racer in the purest sense. That game consisted of big, clunky, filthy-looking cars that deformed in all sorts of spectacular ways while flying through the air, crashing into one another, and even periodically sending the drivers of said vehicles crashing through the windshield in a rag-doll-heavy heap. In FlatOut 2, the same basic concepts found throughout the original game are once again on display, but while more content has been added to the package to try to flesh things out, it is with these additions that FlatOut 2 begins to lose its way. FlatOut 2 throws in some new, stylistic touches both in its content and aesthetics that make it feel more like a Burnout clone than something original. And some of the things that Bugbear didn't change still prove as problematic as they were a year ago. However, these irritations don't suck away all the game's enjoyment, and those with a penchant for smashing and crashing cars will find FlatOut 2 an appealing piece of work.

FlatOut 2 takes much of the basic content from the first game and tosses in a bunch more of it. All the stuff you liked--like demolition derbies, figure-eight races, and stunt mode-- is all there, with more track options and stunts tossed in. There are even new car classes, with race cars and street racers to go along with the typical junk cars. The odd thing about the new cars, however, is that apart from some expected speed differences, they really don't feel any different than the clunkers in terms of handling or durability. Size is really the only major difference, and even that is purely cosmetic (big trucks trump small racers in crashes, and so on). Each car in the game has several ratings in categories like speed, acceleration, strength, weight, and the like, and all of these categories can be upgraded via new parts in the career mode. But even these upgrades lack a measure of tangibility. Again, you notice differences in speed, but no matter how much you crank up the handling rating or the weight rating, you'll still feel like you're driving the same basic car across the board.

That's not to say that any of the cars handle particularly bad, mind you. Though the floaty car feel from the first FlatOut is front and center once again in FlatOut 2, and though that feeling can be very disconcerting early on in the game, you'll get used to it, and because all the cars handle so similarly, you don't have to make any dramatic shifts in how you drive as time goes on. The one problem with all this, though, is that frankly, some of the cars just don't look like they belong. Even though it's fun to smash up tricked-out tuner cars, they drive just about the same as the derby cars, so they don't really add anything to the package except a different visual style to those races. Unfortunately, that style just doesn't jibe with the dirty feel of the races. With so much dirt and debris all over the place, it's almost counterintuitive to want to drive these clean-looking rides right into the thick of it.

This is an issue that permeates most every aspect of FlatOut 2. The whole game simply feels less down and dirty than the original did. It's like someone in a suit somewhere said, "Hey, those Burnout games are a lot slicker looking than what we've got. What if we try to do something more like that?" That's not to call FlatOut 2 a rip-off of Burnout, because as a whole, it still feels like it has more in common with its predecessor than Criterion's racing franchise. But the way that some of the cars look, the way that the tracks are designed, and just the basic feel of the game simply make it a little too immaculate for its own good. Even the whole thing with the driver flying out of the windshield after huge crashes, a much-used (perhaps overused) concept in the first game, has been dumbed down to the point where it's no longer entertaining during races, and it's now purely a punishment. There's no distance or exaggeration to this mechanic now. Your guy just kind of flies out very quickly, flops to the ground, and it's over. While we welcome that it doesn't take as long to reset your car when this happens, we still miss the silliness of it all.

With all that said, there's still quite a good time to be had with FlatOut 2. If you enjoyed the first game and can get past the sterilization of this one, you'll find plenty of destruction to play with. Cars still break apart wonderfully, with tons of body deformations, pieces that fly off, and all sorts of debris that stay on the track for you to drive into as you round another lap. Tracks break apart similarly well and provide plenty of jumps, shortcuts, and alternate paths for you to crash through. Modes like the demolition derby and figure-eight races haven't changed much between games, save for the addition of some more tracks. But the stunt mode has gotten a number of new games to go along with the previous bunch.

If you never played the original game, FlatOut's stunt mode was a mode specifically designed to take advantage of the whole guy flying out of the car thing, with extra-ridiculous games where you could try to launch him in a high jump, long jump, or even use him as a bowling ball in a bowling game, or a bean bag in one of those carnival-looking point tosses. FlatOut 2 adds new minigames, like a basketball game, where you try to drop your dude through one of several available baskets, all with different point totals; a baseball game, where you try to launch the driver into the best possible spot on a gigantic baseball bat, and then watch as he gets clocked like a ball as far as you can go while trying to avoid landing in one of several giant-sized baseball gloves; and royal flush, a card game where you launch the driver into a board filled with giant cards, and then try to get the highest hand possible in five turns while lining up straights and flushes. Aside from the addition of a nudge mechanic that gives your airborne driver a little boost while in midair, these games functionally work exactly the same as the old ones, and they don't have any more replay value than the old games did. Still, they're all pretty challenging in their own right, and there's fun to be had throughout the mode.

One area where FlatOut 2 has unquestionably improved over its predecessor is in the multiplayer category--specifically, online. Last year's game was weird, in that the Xbox version lacked demolition derbies online, and the PC version wasn't online at all. Here, the online is as it should be, available across the board and with all modes available on all versions. Apart from races and demolition derbies, FlatOut 2 also includes the stunt mode online. Stunt mode is inherently more fun when played against other people, so this is very much a welcome addition. Our online testing came out smooth on the PlayStation 2 and on the Xbox, with little to no lag.

Apart from the occasionally questionable aesthetic choices, FlatOut 2 is still a great-looking game. The sheer amount of deformation and destruction you can do to the cars and tracks sees to that, and all of that destruction is contained within some nice-looking environments and arenas. Some of the street tracks are a little dull, but the filthier country back-road tracks are pretty cool. The amount of debris that can litter the various tracks is quite impressive, especially since wrecking into it often slows down your car. Sometimes the animations of your car getting tangled up with some destroyed sign or someone else's bumper look janky, with pieces clipping through one another, but that doesn't happen too often. FlatOut 2 also runs quite well. You'll notice a touch of frame-rate slowdown during particularly huge crashes, but otherwise the game runs at a solid 30 frames per second throughout. Another thing that has been improved over the original FlatOut is the soundtrack. While the first game was made up of purely generic rock from people you've never heard of, FlatOut 2 is made up of far more recognizable generic rock. Inclusions of tracks by Megadeth, Alkaline Trio, and Supergrass are weird but good, but inclusions of tracks by bands like Fall Out Boy and Nickelback are just kind of obnoxious. Still, there are more great songs than bad ones, and there's also an array of high-quality sound effects. It's just too bad there's no custom-soundtrack support on the Xbox version of the game.

FlatOut 2, while not a major improvement over the first game, is still a quality demolition racer. The addition of more content in each and every mode is certainly a plus, and the driving still has a satisfyingly destructive vibe to it. It's just too bad that it doesn't have the same quirky, filthy vibe as the first game. Fortunately, there are still plenty of lovable qualities to be found in FlatOut 2, especially if all you want is the same basic racing gameplay as in the first FlatOut, but with a lot more of it. 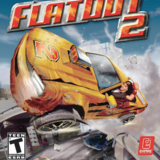 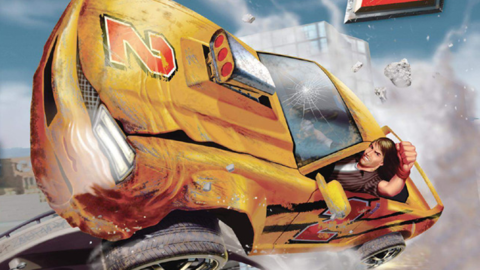 FlatOut 2 seems a little too slick for its own good in spots, but it still manages to provide plenty of destructive racing fun.