Flashback is a great-looking remake of a classic game, but playing it is an exercise in confusion and frustration.

Lost within gaming's undying need to relive the earliest days of Mario and Zelda are countless games that, while popular in their own time, haven't seen the same kind of modern-day revival afforded to better-known classics. Flashback HD, in attempting to modernize a classic, serves as a reminder of why some things are best left in the past. Clunky platforming, dated level design, and frustrations abound, and the graphical upgrade and solid sound effects simply aren't enough to save this game.

Flashback's biggest strength was its attempt to tell an interesting story back when games had just begun to experiment with having any narrative beyond "go here, rescue princess." It had a complicated plot built around some of the more interesting tropes of 1980s and '90s science fiction, including exploration of the solar system, lost and stored memories, and, of course, aliens. The story was respectable for its time, but in attempting to tell it with more modern means, Flashback HD has spoiled it. The voice work is terrible, and many of the cutscenes are so loaded down with camp and awkwardness that it's impossible to take anything the game says or does seriously.

Narrative presentation aside, the core game is fairly standard for action platformers. You move through rooms methodically collecting power-ups, solving basic puzzles, and shooting various enemies, all the while traversing a wholly unfriendly environment. Most combat scenarios are straightforward, eschewing complex combos in favor of movement, positioning, and well-timed attacks. In that sense, both the original game and the HD remake pull heavily from genre trendsetters like Metroid.

That said, the 1992 release of Flashback was much more focused on steady pacing and the creation of atmosphere. In the HD version, the action has been ramped up, and the puzzles have been cut back a bit. Rarely do you have to do anything more complicated than stand in a certain place at a certain time to open a door. In addition, a new piece of equipment lets you see almost every important object. It's reminiscent of both Metroid Prime's visor mode and the detective mode from the Batman: Arkham series. The difference here is that the goggles work much too well in a 2D space, and eliminate any sense of ambiguity; it's usually plainly obvious what you need to do to proceed.

Flashback strips down the platforming challenges that formed the heart and soul of the original's gameplay, while keeping backtracking-heavy level layouts reminiscent of those from the original game. In their stead are more enemy encounters. With that, the game sacrifices the sense of flow and cohesion that once kept it from feeling too jumbled.

One innovation Flashback shared with its fellow 1990s French platformer, Prince of Persia, was the use of rotoscoping to include cutting-edge animations in a game meant to run on a platform with very limited power. The HD version aims to have a modern look while using retro-looking animations, and that causes more than its share of problems. Characters onscreen are rarely animated cleanly, and whether or not they are recoiling from attack or, in the case of your avatar, are ready to make another jump, is rarely clear. Where the player character is and what he's doing can be very difficult to make out since the differences between coming to a full stop after running and ducking in preparation for a vertical jump are tough to discern. So, depending on how you interpret your character's movements, you could be long-jumping into a trap or vaulting straight into a flying enemy.

If there's one nice thing that can be said about the visuals, it's that the new team has faithfully updated Flashback's look while keeping much of the original design aesthetic. Certain areas will likely remind you of some of the more visually stunning scenes from Tron and Blade Runner, and all of that is beautifully reworked for modern systems. Gunplay is another highlight. The audio design gives weapons a solid, powerful oomph, and the ease with which you can pull out a weapon and take out some baddies reflects the altered focus of the design team.

Flashback is a tremendous disappointment, and a reminder that fond memories are often better left as just that: memories. The original game is included in emulated form with each copy of HD, but it's easier to appreciate for its influence on future games than it is to enjoy the act of playing it. Just skip this particular excursion into the past. 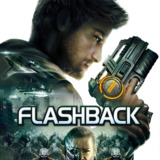 Dan Starkey's first review for GameSpot was for Starseed Pilgrim, and he's been pleased to remain on hand ever since! 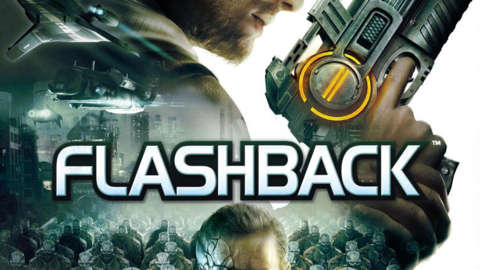 Flashback has players take on the role of Conrad B. Hart of the G.B.I. and uncover a vast and deadly alien conspiracy that threatens everything it means to be human.