First Battalion is an action-heavy World War II tank game with fairly simple gameplay mechanics and not much depth.

Tank games on the PC tend to fall in the simulation category, as they usually attempt to model (with a high learning curve) the experience of being a tanker. First Battalion isn't one of these games. This action game set in World War II would more aptly be described as a shooter than a simulation, as the combat bears little resemblance to reality and the emphasis is on blowing things up as fast as you can hammer the mouse button. The simple gameplay mechanics of First Battalion don't lend it any particular amount of depth; still, things have a habit of exploding quite nicely in this game.

First Battalion's single-player campaign will put you in command of German, American, and Soviet tanks in the European theater of the war. You may command a solo tank or a small platoon of tanks that you can issue rudimentary orders to, such as "flank the enemy" or "follow my lead." Whatever the case, the mission goals are fairly basic: Drive around a large map from waypoint to waypoint, and blast every hostile character you see with your tank cannon or machine gun. Tactics don't play a huge role in this game, and the enemy's job is to wait for you to either get in range, or get close enough to trigger a scripted action (you may have to defend a position against waves of incoming tanks, for instance, or clear out an enemy village).

While the mission design is fairly basic, the action itself can be challenging. Combat is a bit deeper than simply putting the cursor on a target and hitting the mouse button; you do face some of the challenges of trying to nail a moving target while you yourself are maneuvering. Ballistics isn't modeled, so you don't have to worry about your shot drooping, but sometimes you do have to compensate for the slight discrepancy between the cursor and the angle of the cannon in the turret. You also get to exercise some tactical decision making at times, as you may have a limited number of special attacks, such as air strikes, that you can call in on enemy positions. Still, for the most part you have to take care of most of the destruction yourself. And don't worry about running out of ammo, because not only does your tank have completely unrealistic ammo loads and reload speeds, but you'll also find ammunition depots along the way that instantly refill your tank's magazine to capacity.

There's a large variety of tanks in First Battalion, reflecting the rapid improvements in armored warfare during the war. Early on in the German campaign you'll drive the puny, underarmed Panzer 38, but in later missions you'll move up to the much more potent Panzer IV, before ending with the feared Tiger tank. As you'd expect, each class of tanks has slightly different performance characteristics. The Panzer 38 is a zippy little war machine that can slew its turret in a heartbeat, while the Tiger is a lumbering monster equipped with a slow-turning turret. Still, these differences are merely cosmetic, mainly because each tank, no matter how small, is capable of absorbing a couple dozen hits before dying. In fact, it's awfully hard to die in this game, since there are plenty of repair depots dotted along the map that instantly restore your health meter to full strength whenever you drive by them. (If you are knocked out, the checkpoint system will reload you back to a previous save point automatically.)

The multiplayer system in First Battalion at least goes beyond the traditional deathmatch mode that you'd expect with this kind of game. Instead, multiplayer resembles that of the Battlefield games, as you must battle in teams to seize objective flags on a map. There are different "classes" of tanks as well, and you can select a different alternate ability for each tank, such as being able to call in air strikes, lay mines, or request a supply drop. However, the problem is that there just doesn't seem to be any kind of sizeable player community for the game, which means that these vast virtual battlefields are mostly empty.

All the action comes to life thanks to the visuals, which are pretty and busy. There's always something going on during the game, from intense battles to waves of aircraft buzzing overhead and hellish artillery barrages raining down on your position. The rural environments are pastoral, but they do become too familiar as the levels are virtually indistinguishable from one another; France looks like Poland, Poland looks like Russia, and so on. More importantly, you do get a sense of driving around in a tank. You can knock over gigantic trees, reduce buildings to smoldering rubble, and chew up the countryside, though you can't seem to knock over other structures, which can be frustrating. After all, if you can knock down a house, why can't you bulldoze a stone wall with a 20-ton tank? The sound effects feature the familiar war sounds, such as the screech of artillery or the crack of a tank cannon, and the voice work has the kind of accented European dialogue that you've heard before.

Put it all together and First Battalion translates into a fairly fast-paced, though somewhat brainless, action game. You don't need a lot of thought to get your way through the levels of the game, and the shorter missions are a pleasant-enough way to vent some steam. The longer missions, though, drag on and overstay their welcome. Since they can take upward of an hour to get through, the formula of blasting everything you see, repairing damage, and then moving on to the next village to repeat the cycle again gets a bit tedious. 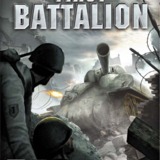 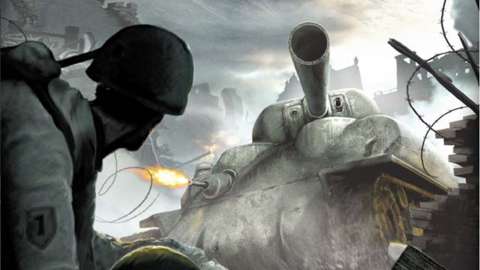