Over the course of video game history, players the world over have saved cities, countries, planets, and entire galaxies from alien scourges, evil ninja clans, death-dealing robots, and brutally insane wizards millions of times. But, as you might surmise from the game's title, Firefighter F.D. 18, Konami's new third-person action game, brings the scale of the crisis down to a more personal level and has you fighting something less tangible than ninjas or zombies. Fighting fires instead of more typical corporeal opponents is certainly a refreshing change, but the gameplay can't make entirely good on Firefighter's unique concept.

In modern Konami style, Firefighter injects additional tension into an already tense job with some between-mission melodrama. You play as Dean McGregor, a firefighter haunted by a tragic accident where he was unable to save a loved one. Now, McGregor finds himself juggling a spunky young female reporter who likes to get too close to the action and a twitchy, paranoid arsonist who has his sights on McGregor. Though a lot of the dialogue is pretty embarrassing, and a lot of the dramatic sequences seem hokey, it's all Hollywood enough that it kind of works.

As firefighter Dean McGregor, your primary concern is saving civilian lives, though you do get points for extinguishing fires, and you'll have to cut your way through plenty of flames to do the rescuing. You have your trusty fire hose for extinguishing most fires, a portable chemical-based fire extinguisher for the more stubborn stuff, and an axe for breaking through walls and smashing various other obstacles. Most of the time, the fire is already at such a full blaze that, as a one-man rescue team, you have no hopes of putting out the entire fire. At best, you can clear a narrow path so you can reach those in peril and hope the fire doesn't catch up behind you too quickly. The game does give you a good sense that you are almost always on the verge of being engulfed in flames yourself, though it's also pretty dependent on scripted events, which can make different sequences predictable, and that makes most of the game's difficult sequences simple exercises in trial and error. The scripted nature of the game also reduces its value, since there's little reason to go back to it after completing the game, which can be done in under 10 hours.

After a few levels of search and rescue, the game will face you off against (and we're not kidding here) a boss fire. Complete with unique names, life bars, special moves, and vocalized death knells, these fires tend to require you to use special tactics to defeat them, and they can be pretty challenging. The AI at work here is pretty blatant, which goes against the inherently unpredictable and dangerous nature of fire, though this is only one of many liberties Firefighter takes with the job. Your hose can follow you anywhere--up several stories in a building, inside ventilation ducts, through closed doors, you name it. When a civilian is rescued, he or she will issue a quick thanks and then magically evaporate into the ether.

This stuff can seem a little goofy, but ironically, the game's biggest shortcoming is that it doesn't go far enough with the arcade philosophy. It's obvious that the developer wanted to create a visceral firefighting experience, yet McGregor still trudges along at a methodical pace, the aiming is sluggish, and the recovery time after taking damage slows things down even further. Also, the controls would have benefited from some additional adjustment, since you can't control the camera while you're running, which forces you to stop entirely to get a better look around you. Konami had the right idea with magical fire hoses and sentient blazes but just needed to keep running with it.

The visuals in Firefighter arguably sell the experience much more convincingly than the actual gameplay. The environments tend to be pretty blocky and bland, but this is of little consequence, since said environments are usually covered in fire. The fire is the star of the show here, and it usually looks convincing enough, but what really sells it is the way it moves, slowly crawling across surfaces and burning intensely when it finds something nice and flammable. The game also employs a variety of smoke and fog effects to give you a sense of the physical mass of the atmosphere, and there are other touches, such as the black smoke that hovers at the top of a room or the flames that lick down from above. These effects really give you the sense you're in a burning building. McGregor's character looks and moves pretty convincingly, though some of the animations for when he takes damage or falls down can look a little awkward, and the other people you'll encounter during the game don't look nearly as sharp. The in-engine cutscenes look good, with nicely detailed characters that move naturally and emote convincingly. You could lodge many complaints about how Firefighter looks, including its repetitive environments or shallow color palette, but what it does, it does pretty well.

As mentioned earlier, the story in Firefighter feels pretty cheesy, and much of that can be credited to the voice acting. The voice acting itself is serviceable, but the lines that these poor actors are forced to read make the story's melodrama feel stilted and absurd and provide at least one chuckle-worthy moment in any cutscene. You also have a staticky voice in your ear giving you useless information such as "watch out for explosions," usually a full beat after something blows up right in your face. Simply put, this guy is just annoying. The other sound elements fare much better, with some rather grand background music adding further to the tension, and the sounds of chemical explosions, sparking electrical wires, popping light bulbs, and hissing gas leaks helping to immerse you in the moment.

Firefighter F.D. 18 definitely gets points for originality, but its interesting concepts, such as the whole boss fire thing, and its quirky nature are hamstrung by clunky controls and repetitive gameplay. If you look past all the smoke, Firefighter isn't much more than a third-person shooter where you can check the inventory of your arsenal on one hand. If the game's concept intrigues you, Firefighter is definitely worth renting, but it's a much more difficult game to recommend for purchase. 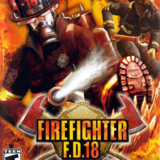 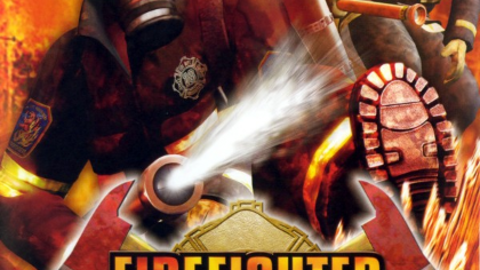