Fire Emblem is the game that essentially kick-started the strategy role-playing game genre in Japan more than 20 years ago, and it has since grown into a thriving and complex niche. While some pioneering games have a tough time evolving along with the genres they helped form, Fire Emblem: Awakening takes many of the best elements of modern strategy RPGs and implements them beautifully into its classic, time-tested formula. The result is a high watermark for the franchise and one of the most engaging and enjoyable experiences on the 3DS yet.

The story in Awakening opens with your player-created avatar waking up in the company of a roving band of soldiers called the Shepherds. The Shepherds protect the interests of the citizens of the kingdom of Ylisse, which has recently been targeted by bandits from the kingdom of Plegia. Plegia is looking to incite a war based on past transgressions of Ylisse's rulers, but there's more to the sinister goings-on: strange beings called Risen are attacking towns, and a mysterious masked warrior named Marth claims to see a future in which humankind has been destroyed. While the narrative is filled with interesting melodrama and political intrigue, the unwavering evilness of some of the villains is ridiculous and makes some parts of the story hard to take seriously.

Fortunately, Fire Emblem: Awakening is more than just talking heads spouting off about vengeance and crushing foes before them: it's a robust turn-based, grid-driven strategy game. Like in many strategy RPGs, you move individual units around a grid, attacking foes while using terrain and character placement to get the upper hand. Certain units and attack types have priority over others: the three main weapons (swords, lances, and axes) form a rock-paper-scissors-style relationship. Archers have attack boosts against airborne units, magic spells can crush the defense of heavily armored fighters, and a host of other factors come into play. Odds and percentages are a key part of formulating your strategy, since some units also have a higher potentiality to hit or miss than others.

However, positioning is more important now than ever: standing next to allies can grant stat boosts, additional attacks, and protection. Keeping two characters in close proximity to each other can allow you to increase their relationship status between battles. In some cases, they can even fall in love and further increase stat boons when they are next to each other in combat. Characters can sometimes help each other in more direct ways, such as following up an attack with an extra strike and shielding each other from damage by foes, and these actions are also affected by how strongly their interpersonal relationships have developed. The burgeoning friendships and affections between allies carry outside of battle, too: visit the barracks to get a glimpse of how characters interact with one another in their off-duty time (as well as potentially gain experience and items), which is a very charming touch.

Like previous Fire Emblem games, Awakening is divided into chapters consisting of story sequences and battles. Unlike those games, however, it's not a strictly linear progression: you have a world map that allows you to fight side battles and visit shops in-between story events, which makes managing your gear and leveling up some of the lagging characters much easier. You can also play optional side missions with unique objectives in order to recruit new members to your merry band or obtain rare items. The map is constantly changing, too: traveling merchants show up to peddle rare wares, enemy Risen outbreaks happen in random locales, and a StreetPassed team of another player's warriors might even appear to fight or trade with you.

The class system has also received some welcome changes. In most Fire Emblem games, class progression is fairly linear, requiring specific items to level up to particular classes once a unit reaches a certain rank. These items are more available in Awakening, making it much easier to promote units. This time around, however, units can also reclass entirely with a special item, sometimes to wildly different classes than what they previously held. Each class learns unique skills that grant special boons during combat, which are retained even after switching to a new class, so changing and leveling up classes can often create some very powerful units if you are willing to invest the time and effort.

Via the 3DS's StreetPass feature, you also have the opportunity to recruit avatars from other players whose data you have downloaded by either fighting or hiring them, further bolstering your ranks. Additional downloadable content scheduled to be released later also promises reappearances of other beloved characters from Fire Emblem installments past that can potentially join your team. Winning battles against warriors from other worlds increases your renown points, which can be exchanged for rare items.

Since you have considerably more freedom in customizing and building up your units than in other Fire Emblem games, the overall difficulty of a normal-difficulty playthrough is lessened, but that doesn't mean the game is a cakewalk for everyone. Difficulty is customizable from the outset: the harder modes feature downright ruthless enemy fighter AI, and you can choose to play the game with or without the series-hallmark character permadeath. Many players will no doubt gun for the classic "dead means dead" setting in spite of any frustration it may entail. Because you see so much of the characters' personal traits throughout the game--and because you build relationships between them--losing a character can be devastating both gameplay-wise and emotionally.

Though many elements of Fire Emblem: Awakening are both smartly designed and extremely fun, there are a few minor annoyances that bog down the experience. Avatar creation is limited, with limited options to change physical features. Some elements of the game's interface are cumbersome--in particular, the inventory system. Each unit carries its own stock of items, but the game lacks a simple "give" command to transfer items in-between fights, necessitating that you put everything you want to pass along into storage with one character and remove it with another.

More advanced combat information, like the odds of your companions performing guards or follow-up attacks, can be tough to find and isn't shown at all in the default pre-engagement screens. The local multiplayer is also disappointing given both the robustness of the StreetPass features and the history of multiplayer in portable Fire Emblem games. It consists of cooperative battles of three units from each player's team simply fighting a group of enemies one-on-one in sequence for items and renown points. Compared to the full-fledged fights and trades that StreetPass offers, the local multiplayer is ridiculously limited.

Nonetheless, it's difficult to find any glaring flaws in Fire Emblem: Awakening. The fun, tactical combat, the character-driven relationships, and the greater feeling of freedom combine to make Awakening the best installment of this beloved series in a long time. Anyone looking for a fantastic strategy game or a long, engaging adventure perfect for on-the-go sessions should absolutely not overlook this gaming gem.

View Comments (337)
Back To Top
8.5
Great
About GameSpot Reviews 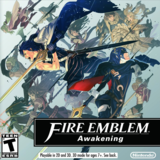