Fans may now experience what they've missed out on for years in this relatively obscure but thoroughly excellent installment of the classic role-playing series.

If you grew up playing 16-bit games for the Super Nintendo Entertainment System, then you're probably familiar with Final Fantasy II and Final Fantasy III. These were some of the defining role-playing games of the early 1990s and featured surprisingly deep storylines and interesting characters, as well as plenty of tough battles and great presentations. At the time, though, it wasn't apparent that there were a bunch of Final Fantasy games that came in between these and the original for the 8-bit NES. The middle child of the 16-bit Final Fantasy era has now finally arrived on the Game Boy Advance, nearly 15 years after it was first released in Japan. Playing Final Fantasy V Advance will be a revelation to some fans of the series. After all, this is the game that introduced many great gameplay concepts and went on to be featured prominently in later, better-known games, such as Final Fantasy Tactics, Final Fantasy XI, and more. Sure enough, the game holds up well even by today's standards, offering up a lengthy and challenging quest. You'll also be able to sink your teeth into lots of interesting gameplay.

This version of Final Fantasy V isn't an exact translation of the Super Famicom original because it's intended to be a faithful adaptation with some key enhancements. For example, it features a new English translation from the original Japanese; this localization is different from the one found in the version of Final Fantasy V included with 1999's Final Fantasy Anthology for the PlayStation. Most of the dialogue is nicely done and succeeds at giving the main characters of the story their distinct personalities. The script has a few too many unnecessary attempts at humorous pop-culture references, but for the most part, it's very good. The visuals look just as you'd expect from a 16-bit game. If you remember playing Final Fantasy II or III in their heyday, this game will look instantly familiar. While some of the graphics are pretty plain, there's a lot of personality in the main characters. Some of the monsters and other foes you'll face still look great. Final Fantasy V Advance also features an updated soundtrack that sounds very true to the style of the classic games in the series--a style that Final Fantasy has held onto even as the series' graphics rapidly evolved. What's more, this version of the game features some new content found later on in the adventure, most notably some new job types for your characters. A bestiary and a music player are a couple of other extras.

The Final Fantasy series is known for the quality of its storytelling, but this is an area in which Final Fantasy V Advance doesn't hold up remarkably well. You'll still be in for a number of surprises and some almost disarmingly emotional moments, though the premise is pretty simple. When the wind crystal suddenly shatters and causes the wind in the world to simply stop, Princess Lenna Tycoon sets off to discover exactly what happened. It's not long before she's joined in her quest by an adventurer named Bartz, an amnesia-stricken old man named Galuf, and a feisty pirate named Faris. This unlikely quartet is quick to unite as a team despite having so little in common. And together, they set off to try to prevent the world's other elemental crystals from shattering. Their journey will wind up spanning much more than just the world they know. They'll travel the land by land, sea, and air, from town to town and dungeon to dungeon, in what's a typically epic Final Fantasy adventure. The main characters don't seem all that likable at first, and aspects of the story that were probably inventive at the time now seem predictable or trite. However, this is still a more sophisticated tale than what can be found in most of today's games.

The gameplay of Final Fantasy V Advance is the best part about it. It's so good that it compares favorably even to the recent chapters in the series. While the game is rife with the random encounters that have always been common to Japanese role-playing games, your ability to freely choose between a wide variety of job types for your characters really opens up the game and creates the potential for lots of interesting, unique combat tactics. Your characters will earn new job types during the course of the game. Thus, their ability to freely switch from, say, being a knight to being a monk is justified in the context of the story.

It's hard to say enough good things about the job system. For starters, it gives you the freedom to completely change your characters' strengths and weaknesses at any time. So if you get stuck trying to beat a particularly tough boss opponent, you can experiment with some completely different tactics. The job system also offers some really exciting variety by featuring just about every cool character archetype that the Final Fantasy series has ever seen. So you're not just stuck with basic classes, such as knights, mages, and thieves; you also get berserkers, mystic knights, ninja, samurai, rangers, dragoons, chemists, beastmasters, and more. Some of these job types seem noticeably less useful than others, though, partly because some are better suited to supporting roles while others are great at dishing out damage. But in the end, it's fantastic to have all of that variety. And one of the best parts is that each character has a unique look for each of the different job types. It's as if each character has this huge wardrobe of completely different outfits.

The job system is all the better because it essentially gives you two experience tracks to consider for each character. Your warriors all grow stronger from gaining experience after each victory, but they also earn ability points that are used to unlock new powers for their current job. Each job has its own unique abilities, some of which are valuable enough to offset inherent weaknesses in those jobs. However, what's really intriguing about this system is that you can mix and match different abilities with different job types. The result is an open-ended character development system that lets you form a diverse and powerful squad. You can have a monk who is capable of dealing tremendous bare-fisted damage or casting some of the most powerful black magic spells. You can also have a ninja whose speed not only makes her quick to dish out pain but also quick to heal or revive injured comrades. Or you might want to equip a summoner with a dragoon's spear so that he can attack without penalty from the rear ranks while conserving magic power for a devastating area-effect attack. Suffice it to say, there are a lot of exciting possibilities to explore.

If there's any downside to this system, it's that it gives you a lot to think about and manage. The game doesn't force you to stick with any particular job types, but you'll naturally want to explore them all before settling on what seems like an ideal combination. On top of all that, Final Fantasy V Advance can feel quite punishing because you can look forward to plenty of powerful opponents who can defeat your characters or even the entire party quickly. Thankfully, the combat system has a nice, fast feel to it because this game comes from an era before Final Fantasy slowed down the pace with lots of big, ostentatious special effects. If your party is suitably equipped, you can breeze through most random encounters in seconds.

Final Fantasy V Advance includes a quick-save feature that lets you easily pick up and play the game in brief stretches. Playing a little at a time, however, might cause you to forget what it was you were supposed to be doing when you come back to the game. Otherwise, you can save your progress on the world map or in key points that are scattered about the dungeons. The game is fairly linear overall, but the world feels quite expansive. There are also a lot of secrets to explore and hidden items to discover off of the beaten path if you choose to invest the extra time and effort. Even though the presentation quality certainly isn't up to the level of newer Final Fantasy games, the depth of play is definitely there.

There's no good explanation for why Final Fantasy V was never released on these shores in the first place because it surely would have been as well received as the other 16-bit games in the series. Be that as it may, consider this a clear-cut case of "better late than never." The sign of a classic is when you can approach it years and years after it originally came out and enjoy it because it still plays great--not for nostalgia's sake. Final Fantasy V Advance is such a game. In spite of its humble stature as a Game Boy Advance rerelease of an old game, those who like Japanese role-playing games shouldn't miss it. 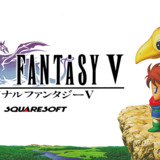