The two games included in Final Fantasy Origins may be short on presentation, but they're certainly long enough on gameplay to justify the purchase price for any hard-core RPG fan.

Final Fantasy and Final Fantasy II hail from a time when console RPGs were young and the formula was still being worked out and improved upon, and as such they may feel a bit rough around the edges to players more familiar with a recent cinematic opus like Final Fantasy VII. The first game especially has a thin plot with no character development and hardly more impetus to complete your quest than "You're the good guys, so save the world." Your characters don't have set names, nor do they speak--you simply choose four character classes and begin the game. Final Fantasy II has characters with actual names and personalities, and it features a more fully developed story than the first game. Neither of these games approaches the narrative depth of, say, Final Fantasy X, but considering their placement on the RPG time line, they do just fine.

The two Final Fantasies in Origins come from the dark ages of RPG gameplay mechanics, which can be a good thing or a bad thing, depending on your stance. Both games require you to level up your characters extensively before you can move on to the next dungeon or area of the world map, so you'll spend a lot of time fighting in random monster encounters. Thankfully, the battles load quickly and the fighting engine is quite streamlined, so you can slay the hordes quickly to amass experience and gold. Raising levels is about as straightforward as you'd expect, and Final Fantasy II also features a precursor to the job system seen in some later games. In short, these are not easy games--they come from a time when RPGs really made you work to progress, which may seem vexing to newer players but will rekindle old feelings of satisfaction in veteran RPG fans.

It's hard to tell from playing Origins whether Square actually ported Final Fantasy and Final Fantasy II to the PlayStation or if they're simply running on an emulator, but whatever the case may be, the two games play much more smoothly than some of the games in the Anthology and Chronicles collections. A couple of those games had some slowdown, long load times, and sound problems, but you'll find none of those in Origins. The games load quickly and everything runs smoothly, making the play experience a bit more seamless than in past rereleases.

Graphically, the games are nearly identical in terms of quality. The WonderSwan Color was a relatively obscure handheld released only in Japan that approached but didn't quite match the capabilities of the Game Boy Advance. Given this, the games in Origins are about on par with early-generation Super NES games--you won't find any 3D graphics whatsoever, the overhead scenes feature simple backgrounds and tiny sprites, and the enemies in battle scenes aren't animated. This is hardly a damnable offense, however, considering the source material that the game draws on. Origins is more about satisfying gameplay than flashy graphics, and the game's audience knows this. Of course, you also won't find any voice acting or elaborate sound production, but the music is of surprisingly high quality, and it's nice to hear some familiar old tunes reproduced with higher-quality synthesis.

Final Fantasy Origins is a nice way to revisit the beginnings of a game series that would go on to dominate sales charts and public awareness. Final Fantasy and Final Fantasy II may not be up to modern RPG standards, but their core gameplay remains enjoyable. Furthermore, you're getting two full-length games for around $30 (one of which has never been seen on American shelves), so Origins is a real bang-for-the-buck package. Factor in the PlayStation 2's backward compatibility, and you won't even have to dig out your old system to play the game. Final Fantasy Origins won't win over staunchly anti-RPG players, but for fans of the genre, this is quite a deal. 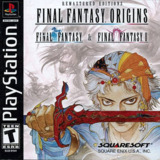