A few problems keep it from being a classic, but Ring of Fates is still a capricious caper whether you're on your own or playing with pals.

If you paled at the thought of having to lug around a bucket of myrrh in the newest foray into the world of Crystal Chronicles, you can put a lid on your worries. All told, Ring of Fates is a much more user-friendly experience than its predecessor, and lets up to four players beat up on some monsters without needing a bunch of extra cables or unnecessary hardware. Toss in a better single-player experience, and you have an action role-playing game that's easy to enjoy right out of the box, even when your buddies aren't there to liven things up. In the process of being so different from the GameCube original, though, Rings of Fate introduces some of its own foibles. Nevertheless, most of them are easy to forgive in light of all the breezy fun to be had.

On the single-player side of the coin, you'll follow younguns Yuri and Chelinka, fraternal twins who can effectively channel the power of magic crystals--provided they work together to do it. Unsurprisingly, there is evil afoot, which has caused monsters wearing red crystals to antagonize the lands. The twins are connected to these events in more ways than they realize, and their journey is marked by several poignant moments of loss and discovery. Along the way, they are joined by three friends (though because Yuri and Chelinka are represented by a single avatar, this actually makes for a party of four). There's nothing all that unique about the plot, but the strength of the charming cast and a load of quirky, cute dialogue hold the narrative together nicely without getting overly saccharine.

The main point of all this is to jump into a dungeon and whack at monsters until they die, while you level up and collect cool loot to help you whack at bigger, badder monsters. You can control any of your four party members at any time by tapping the appropriate icon on the touch screen, and each character has his or her own distinct strengths. The Yuri-Chelinka amalgam is you primary melee warrior, so if you prefer to get up close and personal with a sword, this is the best way to do it. Alhanalem is primarily a magic user (more on spells later), but can use staffs to lob magic orbs from a short distance. Gnash is talented with a bow and arrow (and has an ultra-handy double jump to boot). Meeth is the oddest of the bunch. She can wield a melee weapon (it's fun to stick a hammer in her hands, since it lets her stun enemies), but she's slower and therefore more vulnerable to attack than Yuri. What makes Meeth special is her summoned urn, which she can crawl into and use to roll into enemies for a nice bit of damage. In certain places, she can even grab it and float to spots that the other characters can't reach.

Additionally, each character has a tribal ability, some of which are offensive, while others are used for support or puzzle solving. To access these skills, you press the R button, which in the case of Yuri, Al, and Gnash moves the main game display to the touch screen, where you can use the stylus to perform your tribal talents. In Yuri's case, you touch an enemy to perform a powerful melee attack, while you can do the same for Gnash to land a mighty aimed shot. Al can unleash an area-of-effect lightning attack, but his knack for all things electric is more often used for the Ring of Fates' many puzzles, since he can create a magic thread that makes invisible platforms appear and lights magic candles. Again, Meeth is the odd one out. Like other members of the Lilty tribe, she can create magicites (the game's equivalent of magic scrolls) out of various crystals. To do so, you enter the alchemy screen, select the components you wish to use, and use the stylus to stir your pot of goodies. If you're successful, you create a magicite or other item without spending a single gil.

Of course, these magicites don't just sit there looking pretty--you need them to perform spells in Ring of Fates. This is where the game's greatest strengths and most obvious shortcomings come into play. There's no doubt that the system is very unique: To perform a spell, you need to use the corresponding magicite. No magicite? No spell. To activate one, you tap its icon on the touch screen and hold the X button, which brings up a circle that you can position with the D pad. When you let go, that spell is performed at whatever position the ring occupies. If you want an even more powerful effect, you can create magic piles, which are essentially stacks of magic rings that you can activate at one time with disastrous results for your enemies.

The spellcasting mechanic is interesting and original, but it doesn't always work out very well when you're playing on your own. There's a lot of fumbling involved, since you have to select the proper magicite from the touch screen, hold X to move your ring, press the L button if you wish to lock your ring in place (or keep holding X), switch to another character and/or select another magicite, position the ring, and so on. In the end, most monsters aren't going to stay put for you to do all this, which makes magic piles far less fun in the single-player game than they are in multiplayer. The system is obviously tailored for cooperative play, where piles are a cinch to pull off since you'll do a fraction of the fumbling in half the time.

Solo players will also need to keep a close eye on their computer-controlled teammates, since they're usually worthless. Often, they stand around doing nothing, or possibly attacking every five seconds or so. They'll jump into lava, fall off ledges, or just lag behind and never catch up. The good news is that pressing the L button will summon them to your own character's location, but even the in-game explanation ("Sometimes your friends will fall behind, kupo!") is essentially an admission that the artificial intelligence needs babysitting. The bright side is that you'll be frequently switching between characters and experiencing their individual attributes. The bad news, of course, is that it just contributes to the overall sense that you have to twiddle around more than you need to.

Other aspects of the game help make up for these and some smaller annoyances, however. You'll spend a fair amount of time in platforming sequences and solving environmental puzzles, and for the most part, these elements are done really well and can get fairly involved. In some levels, you'll need to use Meeth to travel to a distant ledge, shoot targets as Gnash, and use Al's magic needle to uncover hidden platforms. It's a varied, well-balanced mix of gameplay elements, and your reward for making it through a given dungeon is a terrific boss battle. Bosses are usually monstrous and require a good deal of movement and thoughtful spell control, and most of them are challenging enough to be fun without getting frustrating.

But like with Crystal Chronicles on the GameCube, Ring of Fates' true delights are found in its multiplayer mode, where up to four friends with their own copies of the game can hit the dungeons together or even take quests from town. The gameplay is essentially the same as in the single-player experience, but without the AI issues and cumbersome fumbles. You can create up to eight characters to use in cooperative play and select from any of the four tribes when creating them. It's rewarding to create a successful spell pile with others, as well as to earn equipment unavailable in the single-player game, which serves to highlight one of the game's better elements: the well-paced drop rate. Unfortunately, the multiplayer aspect has its own major drawback: an unacceptably slow frame rate that seems to stem from the game's inability to render too much action onscreen at one time. It's a shame, because it takes the enjoyable and cheerful romp at the game's heart and throws in unnecessary frustration. It's also easy to lament the lack of online play, though considering the issues with getting the game to perform properly in local multiplayer, it's perhaps no wonder that full Wi-Fi support wasn't included.

Aside from the performance stutters, Crystal Chronicles: Ring of Fates looks terrific, from the colorful character design to its particle-heavy dungeon crawls. As you may expect from a Square Enix RPG, the cutscenes are striking, with particular attention given to dramatic camera angles. The sound design is the real star of the production, however, featuring an evocative soundtrack and fitting sound effects. There's also a good bit of voice acting, and while some of it gets a little too cutesy for its own good (it's one thing to see Meeth's speech quirky speech tic written on the screen, and another to hear it said out loud), it's done consistently well throughout.

There's even more on that little cartridge on top of the co-op play and the 12-hour campaign, like Moogle painting and trading, and a little kart-racing game similar to the one from its GameCube precursor. Had this youth-oriented Final Fantasy been scrubbed up a bit more, it might have been a squeaky-clean take on the hack-and-slash RPG formula. Nevertheless, while the game might not quite be in big-boy league, this kid's got a lot of enthusiasm, and it's infectious enough to make Final Fantasy Crystal Chronicles: Ring of Fates a worthwhile competitor. 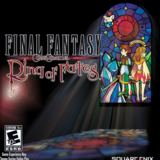 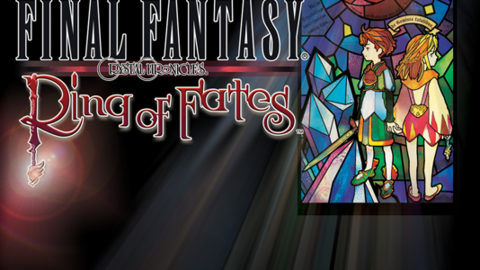 Ring of Fates is a new game in the Crystal Chronicles, featuring four players over WiFi on the DS.