Figment taught me that it's often easier to fight the phobias in our heads when they're singing catchy ditties and while dancing and spewing pseudoscience. Consider “Plague,” a spindly boss representing a fear of filth.

"I've got a vaccine for germs like you, full of autism, nausea, and flu," he chants. How rude.

But that’s why the fight’s so satisfying. Figment literally lets me toss his filth right back at him and vanquish him by forcing his big, toothy mouth to take a shower. I'm pretty sure this isn't what generations of philosophers had in mind when they told us to face our fears, but I imagine they’d be hard-pressed to disapprove.

So goes a typical five minutes in Figment, a colorful isometric puzzler that’s gently reminiscent of Bastion. Beyond that, it's a psychological study that invites you to spend around six hours puzzling through the left and right halves of the brain of a person struggling with depression and trauma, all while tolerating horrid puns and manipulating fart clouds with windmills powered by dragonflies. Suffice it to say, Hellblade: Senua's Sacrifice this is not. That's not to imply that Figment doesn't pack a similar emotional punch in its commentaries on mental illness, but its methods differ. It's short enough not to outstay its welcome, but long enough to craft a believable tale of deliverance from mental squalor.

Figment doesn't spend too long on the details of the background--only a few seconds of audio without visuals; a family's car wreck that ends in a child's screams. The vagueness feels intentional, as it lets you see the following hours as a metaphor for our own (potential) struggles with depression, inadequacy, and apathy. As such, it seems determined not to scare away any players who might benefit from its message, slamming you not with graphic imagery but with vividly colored storybook landscapes channeling Escher, Dalí, and Maurice Sendak. Personality abounds, whether it's the bright greens of the creative side of the mind or the clockwork and steam of the logical left. It creatively embraces music beyond the song-and-dance routines of the bosses, right down to French horns jutting from cliffs or ukelele plants that strum in harmony with the soundtrack as you pass. By the time it decides to get gloomy as you’re navigating through stacks of unpaid bills and spilled coffee near the conscious mind, you’re ready to face it. It’s a beautiful transition.

Our hero? A mopey fellow named Dusty, who's decked out in what looks like Max's getup from Where the Wild Things Are. He’s the personification of the mind's courage, but when his gushingly happy bird friend Piper shows up, he's got little desire to do anything besides find some ice for his cocktail. Above all, Figment is the tale of how he regains his confidence, and the action kicks off after a nightmare runs off with Dusty's scrapbook that's been keeping him mired in the past.

It's not a hard puzzler, but neither is it easy. Figment generally achieves a nice balance, apart from times when the aforementioned "waves of despair" seem a little too difficult to dodge.

Dusty and Piper’s extreme personalities would get annoying on their own, but they serve as foils for one another, and their contrasting banter is one of Figment’s great charms. Brace yourself, though, for lines like "The diarrhea dude is close" and "I smell the ending of this." Figment also gets a little heavy-handed when it wants to make sure you understand this is all happening in the brain, as when Piper explains how picking up little metal orbs from fallen enemies will help increase Dusty’s health pool. “Look, the mind’s reward system just released a bunch of endorphins,” she exclaims. Pipe down, Piper. We get it.

Dusty does a bit of fighting with a wooden sword and some dodge rolls against creatures like "barf rats" infesting the mind, but these moments are rare and a little simple, serving mainly to provide a respite from the game's puzzles--the meat of the gameplay. They're remarkable in that they rarely repeat and fit the themes of the three big regions of the mind Dusty journeys through. Sometimes he'll have to push around enigma blocks or figure out how to scare a thieving bird by tying a maraca to a snake's tail. Sometimes he'll have to shuffle batteries or help a train barge through multiple zones, or use "shell creatures" to block literal "waves of despair." The best moments, though, are the boss fights, where the puzzles and combat all neatly work in tandem while the boss belts out a tune with off-color lyrics that might make Disney cringe.

It's not a hard puzzler, but neither is it easy. Figment generally achieves a nice balance, apart from times when the aforementioned "waves of despair" seem a little too difficult to dodge. Most of the puzzles demand more patience than brainpower, and the approach fits the theme. Again, this is the tale of someone who's learning how to have faith in himself again, and punishing puzzles that leave us banging our heads on our desks likely wouldn't have the intended effect. As it is, it's easier to believe Dusty's relatively quick transition from mopey drunk to nightmare-slaying guardian because we've experienced those little mental victories along the way as well. Much as in Portal 2, the beauty of Figment’s puzzles is that they make you feel smart.

Some bugs still skitter through the mind, and not just the one representing arachnophobia in the middle act. On five different occasions Figment's loading screens locked up while I jumped from one zone to the next, and once a floating platform I was on suddenly became intangible, sending poor Dusty to his doom. Nothing a reload wouldn’t fix, though. You shouldn't take that as an excuse to miss out on Dusty's journey, particularly since it ends on a surprisingly moving note after all the fart clouds and puns like "Holy molar!" Worth pursuing, too, are the little hidden items you can hunt down after finishing the game, which offer glimpses into the life of the person whose head you've been travelling through the whole time.

Figment is at once lighthearted and deep. It reminds us that dark things may lurk underneath otherwise pleasant surfaces, that grumpy egos may populate the shuttered houses of an otherwise beautiful mind. Sometimes Figment seems a little too silly for its ambitions, but that frivolity never manages to fully drown out its overarching message--that if we persevere and have a little faith in our abilities, things will likely turn out well in the long run. Or, at least, we'll learn how to live with the pain. 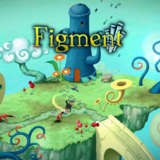 Leif Johnson writes about video games on a remote ranch near the Texas coast. For the purposes of this review, he played Figment for around eight hours using a complimentary copy of the game provided by the developer. 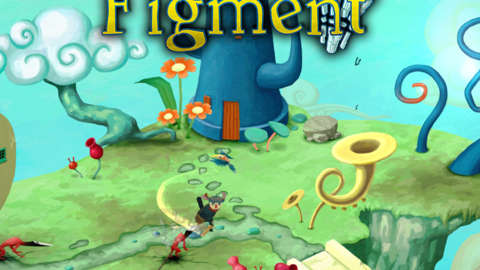 Figment is a whimsical adventure set in the recesses of the human mind. Nightmarish creatures have arrived, spreading fear wherever they go.