The joy achieved from creating a nice-looking kick is short lived once you realize the countless hours of mundane tweaking you spent creating it.

There have been countless fighting games over the years, some technical, some fantastic, but none have ever offered you the option to create your own moves. With Fighter Maker, you're put into the developer's seat and given complete control over how your character fights. While, in concept, this is a novel idea, Fighter Maker struggles with serious design flaws that prevent the game from reaching its potential.

Fighter Maker could be described as having two different parts. There's the fighting aspect of the game and the design aspect of the game. Those of you who don't want to deal with the tedious character creation process can simply jump into the horribly bland fighting game, at least for the entire six levels that it offers before you've beaten the game. There are no hidden characters, no end boss, and you only fight a fraction of your available characters before the game is over. The edit mode lets you tweak every aspect of your fighter, such as stance, attacks, victory dance, and throws. Once you've tweaked your character to your liking, you can try the moves out in a test session. If that works out well for you, you can set the logic behind the character; in other words, you can determine how a computer-controlled version of your character will react, percentage-wise, in response to his opponent's current activity.

The edit mode suffers from some serious problems, turning a seemingly simple control scheme into a nightmare. It creates motions with a series of frames, all of which you must edit one by one. While you're editing a frame, you can move each joint of your character's body on three different axes. Unfortunately, once you've moved a body part, it turns into an overly simple wire-frame version, which makes it all too easy to lose track of exactly which direction the body part actually faces. Accidentally making your character's head face the wrong way or the backs of their knees point forward only adds to the frustration. In addition, you can only copy and paste one frame at a time instead of being able to copy or move a series of frames. This makes character turnarounds or running throws almost not worth creating. Throws are especially time consuming, as you must edit not only your character's movements, but your opponent's as well. Unfortunately, both bodies don't appear on the edit screen at the same time, so you must constantly switch back and forth to ensure that everything lines up between characters. Also, while you are at liberty to create fantastic, unreal attacks, you can't create projectile attacks.The phonebook-sized manual is bland and too vague in all the essential areas. It boasts that creating a move is as simple as making a beginning frame and an end frame, and that the game will generate all the in-between. While this is for the most part true, the computer isn't exactly good at filling in the missing frames, and as such, all the motions created this way end up looking unnatural, and in some cases, they look completely impossible. So you're forced to spend a tiring amount of time generating all the frames essential to creating your move. And once it's done - I assure you - it won't look as good as you'd hoped.

The graphics are plain and unappealing. Aside from Skullomania of Street Fighter EX fame, or a character that looks very much like Starman from Pro Wrestling on the NES, the characters look generic and are without any real personality. What's worse is that you're forced to choose from the unexciting premade cast, instead of creating a fully custom look to your character. Not much can be said for the backgrounds, as they're mostly barren, plain, and unimaginative. The character-select screen is boring, the loading screen is pitifully lame, and the menu selection screens follow suit. Fighter Maker becomes a better game when you put it on mute. The sound is humdrum - you hear music only during fighting sequences, while the sound offers an annoying frequency of cheesy effects.

Neither mode is good enough to stand on its own. The edit mode is confusing, frustrating, and in the end, self-defeating, while the fighting mode is lackluster, boring, and laughably short. The game comes with a distinct fighting style for each fighter, which can be loaded from the CD and modified in the edit mode. Most of the moves are lifted directly from one of the Tekken games, with a few pleasant exceptions. The ironic part is that there are so many moves already in the game that unless you know some exotic fighting style or have a crazy imagination, the move you'd want to create is already included in the game in some form.

Surely developers don't create fighting games using a PlayStation controller, and Fighter Maker successfully drives that point home. The joy achieved from creating a nice-looking kick is short lived once you realize the countless hours of mundane tweaking you spent creating it. And while the ability to create tailored movements is certainly appealing, in application it's exceedingly difficult and is sure to frustrate you to the point that you'll never want to toy with the edit mode again. And, once you've lost the desire to tweak your character, the below-average fighting mode certainly won't keep you playing. 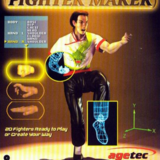 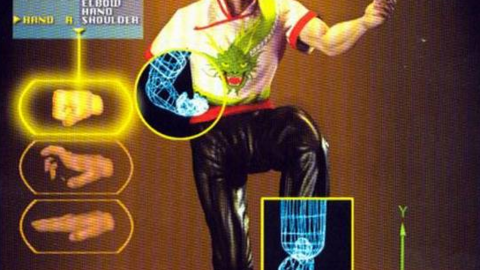 The joy achieved from creating a nice-looking kick is short lived once you realize the countless hours of mundane tweaking you spent creating it.