Fight Crab gives dangerous weapons to crabs, and it's a wonderful, hilarious mess of a fighting game.

Fight Crab, a game about crustaceans fighting other crustaceans, begins innocently enough. You start as a plucky young snow crab, defending his rock pool from other, invading crabs. The next thing you know, that same snow crab is now kaiju-sized, fighting in city streets against a similarly kaiju-sized lobster wielding a giant knife and revolver pistol. Things, incredibly, only escalate from there.

What if crabs had weapons? That's the ridiculous notion that Fight Crab bases itself on, and it commits to it wholeheartedly with an involved combat system and a variety of scenarios that grow increasingly bizarre. The game often exceeds your expectations of what you might anticipate from a game that pits these hard-shelled creatures against one another. At times the joke can start to wear thin, but it's hard to forget the delightful, laugh-out-loud surprises it continues to throw at you.

A third-person, physics-based fighting game, Fight Crab is reliant on your ability to flip your shelled opponents onto their backs and make sure they don't get up. Damage dealt by striking with your claws, environmental objects, or weapons is tracked by a percentage meter, and higher percentages make it harder for crabs to regain their upright posture--a system that draws from Super Smash Bros., and one that allows for the occasional, unbelievable near-death comeback and matches that come down to the wire.

Each of your crab's pincers is assigned to your controller's left and right analog sticks, allowing for a free range of movement to push, lift, and swing. Left and right triggers thrust your claws forward, and bumpers pinch them--it's used as a blocking maneuver or to grab your opponents and other objects. Movement is assigned to the D-pad, where you command your crab's little legs to automatically move in a direction until you tell it to stop again, which feels like manipulating a conveyor belt. A combat mechanic that boosts your damage and allows for an area-effect attack is mapped, bizarrely, to the View/Select button. Turning your crab requires you to move both arms either left or right, and you turn the camera by clicking the analog sticks. It is no doubt a convoluted and inelegant system that makes any kind of maneuver feel like a hard task--you're never entirely in control of all your functions at once, and it often feels like you're trying to steer a runaway tank. But from all that awkwardness is where the beauty of Fight Crab blooms.

Those clumsy controls, combined with a combat system informed by object physics, create a wonderful kind of chaos together. Fights are often ungraceful, like a desperate slap fight between two drunkards who have never thrown a punch in their life before. There are a lot of extended arms trying to keep flailing limbs at bay and bodies crashing into each other, with a considerable mess being made in the process. It sounds pitiful, but these are giant crabs we're talking about, which makes the spectacle of it something fascinating to behold. Throw in some environmental weapons like trees and cars, a sword or two, boomerangs, rocket boosters, and maybe a lightsaber, and it's hard not to light up in a confused glee when witnessing the pandemonium.

Never feeling like you're completely in control can take its toll though, especially on harder difficulties. The inability to quickly react can be frustrating; often, it feels like you're fighting in slow motion, and there were times I had to double-check that my game's frame rate hadn't tanked. You'll sometimes find yourself in uninteresting stalemates with both crabs disarmed, bashing their arms together, trying to find a clear opening or advantage. Fight Crab makes it difficult to break the lock-on camera in order to survey the environment to rearm yourself; the rules of crab combat dictate that you always have to stare your opponent in the eyes.

But the system still allows for some wonderfully rewarding maneuvers if you can anticipate your opponent. Having such control over your limbs let me do things like grab an enemy crab's arm as it was bringing a ridiculously large war hammer down onto me and hold it up as I pummeled and pinched its beady little eyes with my other arm. I once managed to pry away a crab's raised shield with the hook of a crowbar and follow up with a point-blank gunshot, which was magical. Even the relatively simple act of snatching a sword from your opponent's claws or successfully table-flipping them onto their back is immensely satisfying, given the finesse required. These beautiful moments make you want to shout in joy.

The game's primary mode is a campaign which throws you into different arenas to go up against a series of opponents one after the other, survival style. If you find yourself on the back foot and losing your grip on the controls, the constant onslaught can be disheartening. Thankfully, the game allows you to simply resume your progress beginning from the opponent who beat you. More importantly, the game's escalating ridiculousness with regard to its enemies and stages is certainly enough of an incentive to keep you pushing through it--some fond memories of mine involve fighting a nunchaku-wielding crab atop a table located in a Chinese restaurant, going against a pair of ninja crabs equipped with shuriken and sai, tumbling around in a daycare with a couple of chainsaws, and going up against two crabs riding Vespas swinging around chains.

There are certainly many parts of Fight Crab that leave a lot to be desired--the UI and menus are garish at best, and outside of the crabs themselves and the energetic J-rock theme song, the audiovisual work is only serviceable. The game's currency, levelling up, and weapon shop system are left unmentioned; you stumble across them on your own. Fight Crab also features online co-op for its campaign, online competitive ranked multiplayer and casual lobbies--all modes which I unfortunately failed to find a match for during the launch week. Perhaps not enough people have heard about how great the act of fighting crabs can be, and that needs to change.

Like the crab combatants themselves, Fight Crab feels like it smashed its ridiculous concept into a clunky, physics-based fighting system with gusto and didn't let up until something kind of worked. And a lot of the time, it does work. There's magic here--it's impossible not to be charmed by the silly, uproarious dynamic of watching two crabs having a knife fight. It's sloppy and ugly at times, but so is life. Fight Crab taught me that sometimes you just need to stop, take a minute to appreciate the beauty that lies within those colliding carapaces, and let yourself smile. 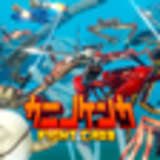 Edmond stumbled into Fight Crab on Steam, immediately purchased it, and spent five glorious hours with it for this review.