Ginga Toe Chop. McGeady Spin. Touzani Around the World. No, that's not complete gibberish; those are just some of the eccentrically named tricks you can use to outsmart, outrun, and outplay your opponents in FIFA Street. Their various flicks, volleys, and flashy footwork make each an impressive display of technical prowess, and--unlike the tricks in FIFA Street's predecessors--none of them would look out of place on the football pitch. The cartoonlike visuals and seemingly impossible tricks of old have been replaced with a more gritty visual style and pure, fast-paced street football. FIFA Street is satisfying to play and almost as impressive to watch, despite something of a steep learning curve to master the intricacies of the game.

Not that FIFA Street doesn't try to make things easy for you. A set of tutorial videos teaches you the fundamentals of the new street ball control system, including body feints, stepovers, and juggling, which are easy to perform and immediately impressive out on the pitch. Step up to some advanced tricks, though, and the controls get much more complicated, with all manner of analogue stick flicks, rotations, and button taps required. A long process of trial and error is the only way to memorise the commands and nail their timing: it's almost on par with trying to master the many combos of fighting games like Street Fighter IV.

While it's a pretty steep climb to reach the pinnacle of your football prowess, the selection of tricks makes for a lot of depth--even more so than FIFA 12. You can spend days trying to master a new trick, making it all the more satisfying when you see it performed by some admirably realistic player animations onscreen. Of course, knowing when to bust out the tricks is half the battle in FIFA Street. With matches taking place on small pitches, and with teams of six players or fewer, intense one-on-one encounters are par for the course. Running it down the side of the pitch or playing the long ball just isn't an option.

Instead, you have to read your opponents at a macro level, studiously watching the movements of their feet to perform swift turns and feints to pass them. The same applies when you're off the ball, thanks to a simplified version of FIFA 12's tactical defending system. You have to expertly jockey the opposition while carefully timing your tackles around their fast feet and tricks; otherwise, they zoom right past towards your goal. It's all very enjoyable, and there's nothing more satisfying than chaining together a bunch of tricks before sending the ball to back of the net for a spectacular-looking goal. Your tactics also have to take into account the pitch you're playing on. Some are really small, with walls you can bounce the ball from to perform skilful passes or crosses. Some are larger, but don't have walls at all, so if you play the ball high, chances are it's going to go straight out for a free kick.

You encounter most types of pitch in World Tour, which is an all-new career mode, something that was sorely lacking from FIFA Street 3. Thankfully, it has been mostly worth the four-year wait. You're put in charge of an up-and-coming squad, where you decide what players to hire, what position they play, and what events to take part in. Helpful messages from opposing teams, such as challenges and messages of congratulations from teammates, are relayed via a mobile-phone-style text message system, while a world map lets you easily see and choose which events to go to. Elsewhere, a player creator lets you meticulously craft each member of your squad, or you can select from a number of premade avatars. Once you've assembled your squad, you hit the road in search of street football glory, that is, taking part in a range of events across the world with the hope of winning trophies.

There are numerous events to take part in, with varying numbers of players and rules. Those include simple five- or six-a-side matches where the team with the most goals wins; Last Man Standing, where each goal you score eliminates a member of your team; and Futsal, where the stadium has no walls. There are also a variety of brilliant trick challenges, including Panna Rules, where you gain points for performing a panna (kicking the ball through an opponent's legs and retrieving it on the other side) or for getting around defenders with skill moves. The entertaining twist is that points aren't banked until you score a goal, so there's a real risk-reward factor to the action. Likewise, if your opponent scores, all the points you have saved up are lost, adding another layer of strategy to a match.

In every event you earn skill points for each trick you perform, which are totalled up at the end of the match and awarded to your players like experience. This levels them up, and at each level new tricks are unlocked, which makes matches much more than just a simple victory. Plus, you're given points you can assign to different player attributes such as passing, shooting, and athleticism. This lets you train some players toward specialist skills such as defending, or you can aim for a decent all-rounder. Some matches even let you poach a higher-level player from the opposing team, giving your squad an immediate and noticeable boost. Unfortunately, assigning attribute points gets tiresome, particularly when several of your players level up at once, so the omission of an automatic level-up option is annoying.

Also annoying is the amount of grinding you have to do in World Tour mode. Each event you win adds to your team's overall score, which gives you a place on a global leaderboard. Unfortunately, even at an early stage many championship events call for a high ranking, meaning you have to spend inordinate amounts of time repeating events just to gain points for your team and increase your level. You can increase the individual difficulty of each event from bronze through to gold to earn more points, but then they may prove difficult for you to win at all. You are at least given better rewards at gold level, with branded tops for your team on offer, while bronze usually nets you a shameful-looking pair of socks.

If you tire of World Tour mode, you can Hit the Streets and take part in exhibition matches in various preset modes or delve into the options and create your own custom mode. Up to four players can play on the same console, or you can take your World Tour squad online. Most of your time will be spent in Street Seasons, which consists of 10-game sets of five-a-side of Futsal matches, the aim being to get your team promoted to one of 15 divisions or simply try to avoid relegation. There's also a Team Play option, where you can take just your captain online and play with others on the same team. And if that's all too competitive for you, you can join unranked matches with your Xbox Live friends too.

What's super-neat is that FIFA Street's online play ties in to EA Sports Football Club, meaning that any XP you earn in the game nets you rewards in other games, such as FIFA 12, and vice versa. The online mode is expansive, and helps make FIFA Street the most complete and entertaining game in the series so far. It's also the most stylish, with a slick presentation that makes menus easy to navigate and a sound design that captures the grass-roots feel of street football. The suitably gritty visuals capture the same spirit; the floodlit street pitches look the most impressive with their graffiti-splattered walls. Only a few infrequent issues with collision detection--where players seemingly run through each other--spoil it.

FIFA Street's brand of super-fast-paced football certainly isn't for everyone, particularly those who enjoy a slower, more built-up match. Nor is the steep learning curve to be overlooked. But to dismiss it completely would be a mistake. This is as authentic a street football experience as you'll find, with a passion and flair that make it an exciting and thoroughly enjoyable game to play. It's head and shoulders above its predecessors, with the new career and online modes ensuring you have plenty to keep you entertained, while EA's typically slick styling means your eyes and ears are in for a treat too. Give it a chance, and take your tricks to the streets: you need never again ask what a McGeady Spin is. 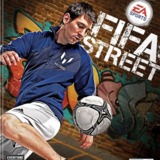 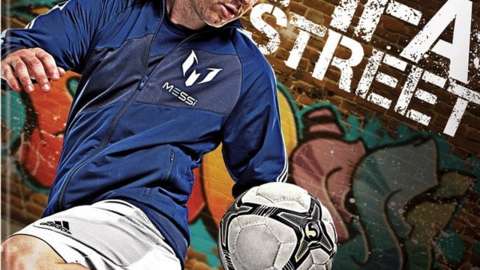 FIFA Street is a street soccer game that delivers an arsenal of street dribbling styles and trick moves that ignite the one-on-one battles within matches.