FIFA Soccer 13 on the Vita is little more than a roster update and lacks many of the new features from its console siblings.

Where FIFA's first outing on the PlayStation Vita, simply titled FIFA Football, eschewed a numerical moniker, the latest version proudly slaps a 13 onto its name. And with that number comes a lot of expectation: the hope that this isn't just another weaker, slimmed-down port, but a true portable version of a console classic. Sadly, that isn't the case. FIFA Soccer 13 on the Vita not only lacks many of the excellent new features of its console counterpart, but it even lacks those of FIFA 12. What you get, then, is a game that's nigh on identical to last year's FIFA Football, complete with a match engine that's still trapped within the aging confines of the now three-year-old FIFA 11.

That means you're limited to the same single-player modes that were in FIFA Football: Virtual Pro, where you create a player, selecting his age, play style, and position; and Career, where you can take your virtual player, or a real-life player, through a 15-year career. There's also the option to take up the role of a player manager, which lets you manage your team's lineup and tactics, as well as recruit new players during the transfer window. And if that's all a bit much for you, there's also a range of basic tournaments to play through, from the FA Cup through to custom leagues and knockout tournaments, as well as quick exhibition matches.

These are still fun modes, but the lack of development is jarring; there's simply nothing new for fans of the Vita version to sink their teeth into. The excellent EA Sports Football Club online mode, which keeps track of any experience points earned and ties them to a real-world team, is still missing. So too is the addictive Ultimate Team--FIFA's mix of role-playing-game-like card trading, Top Trumps, and football management--which is a massive disappointment. Trading cards with others on the go, or even just managing your squad away from home, is a complete no-brainer for a portable console.

As if that weren't bad enough, the action on the pitch lacks any of the refinements FIFA has seen over the last three years. You're stuck with the old "pressing" technique for defending, which feels horribly dated compared to the more modern jockeying and containing system. There's no sign of the physics-based player impact engine, or the improved dribbling system either. Nor does the improved first touch system that made for a more realistic experience in the console version of FIFA 13 appear; the ball stays firmly glued to the feet of players, no matter how good or bad the pass is.

Online modes see the same lack of improvements. Ranked and unranked matches are still available, with global leaderboards keeping track of your progress, while custom leagues let you challenge your friends to a spot of ranked competition. But there's no sign of the weekly match-day updates for teams, or modes like Head to Head Seasons and Online Friendlies. The oh-so-addictive skill game challenges of the console version of FIFA 13 are completely absent too, so you're stuck with the player-vs.-keeper loading screens of old.

The Vita-specific features--the touch controls--remain the same, which means they're just as painful to use as before. You can tap on a player to pass to him, with longer taps adding more power to the pass, or tap on a player to switch to him when you're defending. It works, but taking your hands off the sticks and face buttons to press the touch screen is awkward and ultimately slower than just using the buttons. It's also far too easy to trigger the touch screen by mistake, leading to a bunch of frustrating, accidental passes. And the less said about the rear touch pad the better. While you can use it to shoot, with the rear surface representing the face of the goal, it's triggered far too easily, and even if you do choose to use it, it's fiddly, so once again it's much better to just use the buttons.

The lack of improvements doesn't mean that there isn't any fun to be had with FIFA 13 on the Vita. The standard pad controls are tight, and the action is quick and fluid. Knocking in those spectacular-looking goals as players tussle for the ball is still a mighty exciting experience, and the ease with which you can create chances from crosses, runs, and even hit-and-hope volleys is a testament to how well the aging FIFA 11 engine, which the game is based on, is holding up.

But that's all in last year's FIFA Football. Calling this a new game and charging a sizeable amount of money for it is completely unjustified--this is a kit pack and nothing more. You're much better off saving your cash and picking up an older, cheaper copy of FIFA Football and downloading a roster update. This is FIFA 13 by name only and a kick in the teeth to fans, eager for some something new, who picked up last year's version. 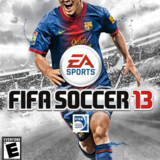