FIFA 09 plays better than ever before, and a wealth of new modes and features add plenty of longevity.

UK REVIEW--It has been a busy 12 months for EA Sports and football games. FIFA 08 was a genuine revolution for the series, with a more realistic pace and improved AI adding some much-needed depth to the gameplay. UEFA Euro 2008 came six months later, further refining this groundwork while expanding the features list with more unique game modes. With FIFA 09--the third EA Sports football game in a bit more than a year--the developers have honed the core gameplay even further and added even more features, game modes, and online elements to the mix. It amounts to an incredibly deep and varied package, and despite a few niggling bugs and performance issues, FIFA 09 is the pinnacle of the series so far.

Given the six-month period of time between Euro 2008 and FIFA 09, it's no surprise that the two games play similarly. However, the pace has quickened slightly, passes need to be directed with even greater accuracy, and the referees seem even more eager to dish out cards. The most noticeable improvement is in the physical quality of the players. Attackers point to where they want the ball, defenders direct offside violations to the linesmen, and everyone has lost that plastic look from FIFA 08 that was so off-putting. Although you can still spot individual animation routines during replays, the players now feel as if they're interacting with one another and the ball. As a result, player weight and speed are now a vital part of overall tactics, and combining runs with perfectly timed passes has become the only way to succeed.

With opponent AI that absolutely will not stop until it gets the ball from you, FIFA 09 is now firmly rooted in simulation territory. Experienced players can still use the left-trigger-enabled trick system to run around players, but unless you're passing the ball around effectively, you have little hope of keeping possession. The result is a game that's heavy on midfield battles--even the commentators remark on how often possession moves between teams. The AI is particularly good even on the easier settings, not only moving in to take the ball off you, but springing offside traps and adapting their tactics throughout each match. This punishing difficulty forces you to up your game, and you soon start to develop a rhythm and accuracy that can cut through defenses to score some spectacular goals. Only the odd AI mistake from your own team conspires against you, with goalkeepers running to punch a ball that's flying well wide of the goal or the computer selecting the wrong defender for you when the other team is on a break.

Adding to the deep and rewarding gameplay is a wealth of new and existing game modes. The new cover feature is Be a Pro: Seasons, which expands last year's BAP mode to cover a full four seasons. In Be a Pro, you control a single real-world player or a custom character instead of an entire team and then craft the career of that player for both club and country over four years. You still have to focus on winning games, but each match carries additional criteria, such as making a certain number of passes, tackles, or goals, which add to your overall experience points. If you're a fan of a certain player, it's great to step into his boots, but Be a Pro is most addictive when you spend time customising your own footballer and putting your name on the back of a shirt. With tactical changes and substitutions happening automatically, the emphasis is on your being the player, and your ultimate aim across the four-year career is to stay in the A-squad and earn the captaincy of your national team. If you get bored of playing as just one player or want to mix things up a bit, then you can opt to control the entire team, and friends can jump in and out as other players if you want support. Be a Pro is worth checking out if you want to see the game in a different light, but even in attacking positions, you'll spend a lot of time waiting for some action.

Be a Pro really comes into its own when played online. Up to 20 people can join in a single game, and the same passing/tackling/position/goal reward system means you're encouraged to play as part of a team. Be a Pro online is technically well implemented too, with a diplomatic lobby system that lets people jump in and select the position they want to play; the first people to ready up are awarded the captaincy and thus can control the tactics and options for the entire team. The lag is less of a problem on the PS3 than it is on the Xbox 360, but it's still prone to some slowdown on occasion. The number of shouting voices can sometimes make it difficult to communicate, but on the whole it's well implemented and is a huge amount of fun to play.

New online features aren't limited to 10-vs-10 in FIFA 09. The game also incorporates the Adidas Live Season--similar to a feature in this year's NBA Live--whereby real-world stats updates are sent to your console on a weekly basis. The game comes bundled with an access code for one free English, German, Spanish, French, Mexican, or Italian premier league, whereas additional leagues can be purchased either individually or as a set. The stats updates change the ratings of players in the game, so if someone is doing well in real life, he'll become better in the game. However, it also works the other way round, and injuries lower the stats considerably for the period of time that the player's not playing in real life. It's an expensive feature if you want updates to all of the leagues, and it expires in May 2009, but if you're a fan, it definitely adds a bit of drama to your FIFA season.

The final major addition to the game is the new custom-tactics feature, which lets you get in-depth with the behaviour of individual teams. You can adjust 11 different factors for each team, including positioning and aggressiveness, and then map your tactics to the D pad to activate during a game. What's more, you can upload these tactics to your online FIFA 09 Locker, which lets other people download and rate what you've come up with. There are 28 slots in total, and you can download other users' data and save it to your storage device. That said, the standard configurations that EA has programmed already mirror the playing style of most major teams; Arsenal have a characteristically offensive style, whereas Manchester United tend to push up from the midfield.

Although FIFA 09 offers a lot of new features, the game is still full of existing content from previous games. There are lots of offline game types, such as the Manager mode, which concerns you with transfers and training, and the Lounge mode, which lets you and your friends mess around to create scenarios and challenges. Then there are the online modes, which are comprehensive to say the least. The Interactive League lets you represent your favourite club online against supporters of other teams, with overall rankings tracking each team's progress around the world. There's also a new FIFA 09 Clubs mode where you create your own team and try to recruit your friends to play alongside you. In addition to the standard ranked and unranked games, you can join lobbies to chat with other people before taking games at your leisure, or you can create custom leagues for up to 31 other players to play against. The only sore point is the slowdown that permeates some games, especially since quitting out of a particularly laggy match results in your conceding it.

EA Sports rarely disappoints when it comes to presentation, and FIFA 09 reflects the usual attention to detail. The soundtrack is as large as it is varied, with 42 songs from well-known artists, such as Black Kids, CSS, and Damien Marley. There's also an option to stream podcasts from EA, TalkSport, and ESPN, among others, directly to your console. The commentary is once again provided by Andy Gray and Martin Tyler, who provide great camaraderie with comments such as "That's a great example of what you used to do as a player." Although they occasionally repeat themselves or say the wrong line, there are lots of team- and player-specific sound bites that are delivered in an enthusiastic and authoritative manner. The ESPN news integration is also back, delivering live ticker feeds on your favourite teams and leagues, and even other sports, such as F1 and NBA. Then there's the link to EA Sports Football World, which lets you send videos and photos from the game to share with friends online. Uploading videos is a long process because they're converted to Flash in-game, and www.eafootballworld.com is confusing to navigate and link to your EA and Xbox profiles. However, the number of features here means that you keep discovering new things the more you play and delve into the menus.

With FIFA 09, EA Sports has created the deepest, most realistic and feature-packed football game yet. The gameplay hasn't changed a lot since UEFA Euro 2008, but the tweaks and refinements have produced an incredibly rewarding game. There's an almost bewildering number of modes to play through, and the amount of online functionality means that the game should have a good deal of longevity. There's still room for improvement, considering the high amount of lag in certain online matches and some AI blunders in single-player, but if you're a football fan looking for something to last you the entire season, you can't go wrong with FIFA 09. 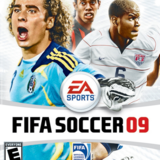