Fans of real-life soccer will find this the most enjoyable soccer experience on the PC to date.

Those who hammer the buttons on their gamepads as though they were synthetic rodents in a whack-a-mole game had best prepare for their day of reckoning. The foremost proponent of willy-nilly button-beating, EA Sports, has used the latest edition of its vaunted FIFA Soccer series as a springboard to a more thoughtful and more challenging control method that genuinely alters the way the game is played. Penalizing adrenaline-fueled thumb jockeys and rewarding those who initiate actions only after quick consideration, FIFA Soccer is quite simply a more grown-up affair than its predecessors. That it also offers improved passing and player movement and a generally more credible feel are just two more reasons fans of real-life soccer will find this the most enjoyable soccer experience on the PC to date.

Since its debut in the mid-1990s, the FIFA series has continually ranked as one of the strongest PC sports games on the market. If the series had a low point, it was in the highly stylized FIFA 2000, which focused on graphical prowess and high-speed button pushing over believable gameplay. In doing so, it seemed to herald a trend toward even more arcadelike gameplay in the future. Fortunately, things got back on track with last year's FIFA 2001, a game that showcased a renewed commitment to authenticity and now can be viewed as an obvious stepping-stone to this year's model.

In FIFA 2002, the gameplay is noticeably slower and more deliberate. Players behave even more like human beings than they have in the past--taking a few moments to gather in passes, accelerating slowly, gaining momentum in their first few steps, and ultimately losing steam toward the end. Rapid and repetitive button presses only hinder subsequent maneuvers, and manually controlled speed bursts do not generate the temporary supermen seen in prior editions. Passes must be delivered with an emphasis on trajectory rather than raw speed, and shots on the goal should be measured and carefully targeted if you don't want to miss the net completely.

The art of tackling has undergone a particularly satisfying revision. No longer do slide tackles carry a player 20 or 30 feet across the field, razing opponents without fear of punishment. Now, you had best measure your chances of contacting the ball first, or you'll risk drawing a yellow or red card. As such, an aggressive tackle is recommended over a conservative approach only in the most dire circumstances.

Artificially intelligent players without control of the ball display newfound canniness in some situations, though they may just as likely infuriate you in others. It all depends on whether the program has been coded to recognize the play you want to set up. Normally, teammates smartly predict strategies and move skillfully to open areas, setting up for quick one-twos or running at double speed to await perfectly timed lobs that drift just over the heads of defenders. EA has added new visual cues such as trailing red streaks to help identify which of your players is currently making a break for open ground. Sadly, teammate reaction is less convincing when the human coach leads his or her ballcarrier on an abnormal crossing pattern or otherwise atypical maneuver. In such situations, nearby players tend to stop or shuffle about listlessly rather than adjusting and moving where you want them to go.

The ebb and flow of the team is especially believable. Offensive forays are stifled not just with well-timed interceptions or tackles, but also with appropriate positioning. Watching a computer-controlled side move toward midfield, only to play the ball back and regroup when faced with a threatening but as yet uncommitted wall of defenders is something FIFA veterans have rarely seen before. Shot and goal totals are still a bit too high, and defenses continue to possess uncanny skill within the box--often dispossessing ball carriers and picking up loose balls faster than they do anywhere else--but EA Sports has generally done a fine job determining the final tally according to quality of opportunity and ball possession, total number of shots, and overall dominance. In short, FIFA 2002 beckons you to play again if just to more effectively implement your strategy and more astutely man the controls.

FIFA Soccer 2002 is not completely void of the series' past problems, some of which now seem more conspicuous simply because the rest of the game is so darned good. The most prominent problem is its continuing inability to properly generate the final scores of simulated contests in league or tournament play. Whether you've been dominating prior games by scores of 10-1 or losing them by the same margin, the programming consistently spits out tight, low scoring results that might just as easily be a draw as a victory one way or another. On the pitch, players will be mystified when the referee blows his halftime or fulltime whistle right in the midst of a breakaway, and they'll be annoyed when their controllers just don't seem to respond as quickly as they should.

It won't take returning players long to discover that EA Sports has paired FIFA's new physics and modeling authenticity with several measurable graphic innovations. The prior edition, FIFA 2001, was already one of the prettiest sports games on the market, and FIFA 2002 offers enough new wrinkles to warrant a close inspection even by those who purchased last year's model. The pitch itself is brighter, sharper, and far more representative of real grass. Players raise their arms to call for passes and jostle about even more realistically. The crowd is more colorful and alive than ever before, flying flags of the participating nations and waving their arms when they see something they like. User perspectives are doubled from last year's four to eight with an extra manual "free cam" available during replays, yet EA Sports has curiously continued to confine the number of playable stadiums to five, each of which is now generic. Fortunately, all five are impressive.

As is typical for the series, FIFA 2002 sports three variations of playing conditions--day, night, and rain--the latter of which combines visible droplets, overcast skies, an appropriately faded color palette, and the roar of distant thunder and the pitter-patter of precipitation. In addition, the FIFA audio scheme is a surround-sound delight. Players grunt when they kick the ball, shout when they want the ball, and howl painfully when hit with it. Returning BBC commentators John Motsen and Andy Gray once again prove infinitely preferable to FIFA 2000's ESPN pairing of Phil Schoen and Julie Foudy, generally exhibiting awareness of the play and a typically dry UK wit. Britain's popular techno and dance purveyor Ministry of Sound provides the music, much of which is majestically electronic and seriously funkified.

Off the pitch, FIFA 2002 is a managerial funhouse. Now, you can generate, edit, and otherwise customize any number of new teams, then take one of those teams into a league or tournament involving up to 32 of the game's 500-plus sides or multiplayer contests via network, direct modem connection, or EA's own Internet player-matching service. You can construct new players from scratch, define skill levels in each of eight categories, then assign such personal characteristics as age, nationality, clothing style, height, weight, and facial features. Controller assignments are now fully adjustable, as are virtually all other parameters.

Like most EA Sports series, the FIFA series receives an annual upgrade that addresses some concerns and leaves others for the next installment. In this way, FIFA Soccer 2002 is no different from its predecessors. However, EA Sports decided to key on gameplay this time around, and in the process it has successfully propelled the game dangerously close to reality. This should sit well with anyone who truly appreciates the nuances, subtlety, and pace of the real-world sport. 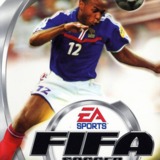