FIFA 07 on the Game Boy Advance offers little in the way of enjoyment or value.

While FIFA 07 on the Game Boy Advance is more lightweight than the other versions of the game, its main problem is that it simply isn't fun to play. While its roster of 510 teams is certainly impressive, the game's clunky gameplay and imprecise control system remains mostly unchanged since 2006 FIFA World Cup. If you do end up getting into FIFA 07, you'll find it has little to keep you interested in the long term.

The handheld format is perfectly suited to short games on the go, and FIFA 07 offers you the chance to get into a game instantly. You can choose to pit any of the 510 teams against each other, and the game defaults to the team that you choose as your favourite when you first start the game. If you want a long-term challenge, the career mode gives you a five-year run managing a club with the intention of meeting set goals and earning 'prestige points' in the process. These points are the measure of your success, and you need to meet the demands of the club to avoid dipping below a specified number of points at the end of each season. The fact that you can simulate matches instead of playing them suggests that this is indeed a proper management mode, but the only thing you can manage is basic formation and substitute settings. There's no way to transfer players or even set training regimes.

The tournament mode presents players with the chance to take part in 20 tournaments and cups from around the world. As with the career mode, you can choose to simulate certain matches if you like, and you can also manage your team formations and starting lineup. The only problem is that you are allocated only one save between the career and tournament modes, so you can't have a game running in both modes simultaneously. The third and final feature is the challenge mode, which presents 20 match conditions which you can play with set teams. These matches start in games that are already under way, and require you to do things like come back from behind or hold on to your lead. It's a good way of experimenting with other teams that you may not otherwise use, although it only takes a few hours to play through them all. Multiplayer games can also be played by up to two players, if each person has a copy of the game and you have a Game Boy Advance link cable.

Playing FIFA 07 can be a frustrating experience, as you never feel like you're truly in control of the players. Those of us who have been playing football games on higher-end console hardware might not be happy with the fact that the GBA hardware isn't powerful enough to show off subtle animations of the world's greatest players, but the real issue is the control system. With only two face buttons, the left shoulder button has to be used to modify 'shoot' into 'long pass', and 'pass' into 'through ball'. As you'd expect, this doesn't leave much room for the new skill moves that have made it into the other versions of FIFA 07. The one thing you can do is make a receiving player move immediately when the ball is passed to him by holding the pass button as he collects the ball.

But taking these hardware limitations into account, EA Sports seems to have made little in the way of progress since the last FIFA. The game offers very little challenge, as it's still possible to run most of the pitch without being tackled. Defenders will subsequently be bunched up behind you in pursuit, but once you make it to the penalty area goals are very easy to score. When they're attacking, artificial intelligence players have a strange tendency to run the ball back into their own half without passing it, which makes tackling them easy. While the referees are keen to issue red cards for mistimed sliding tackles, it doesn't make much difference, as you only ever need to use standard tackles to succeed anyway.

The audio in the game is equally mediocre. It's not realistic to hope that the GBA could produce voiceover commentary or anything like that, but the only real atmosphere in the game comes from the constant roar of the crowd, which is occasionally punctuated by indiscernible chanting. The menu system has a few music tracks that loop for about 30 seconds each, but they quickly become repetitive when you're not playing the main game.

It has only been a matter of months since the last FIFA was released, and in terms of gameplay FIFA 07 on the Game Boy Advance is almost indiscernible from that last version. While there are limitations in the hardware in terms of graphics and controls, EA Sports needs to improve the opponent AI and make the gameplay more precise in order to make it a worthwhile purchase. From there, an effort to prolong the interest in the game with deeper management features certainly wouldn't go amiss. As it stands, FIFA 07 has little to offer football fans other than the authenticity that comes from a bought-in license...especially for players who have already purchased 2006 FIFA World Cup, which is much the same game anyway. 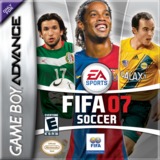