FIFA 06 is a decent soccer game that lacks real depth, but it's still fun to play solo or with friends.

Almost a full year into its life, the Nintendo DS has finally got a soccer game. The bad news is that the DS version of FIFA 06 plays quite differently from its home console and PC namesakes. The good news is that the game plays an enjoyable match of soccer, makes decent use of the handheld's second screen, and boasts the same high level of presentation that we've come to expect from EA Sports in recent years.

The first thing you'll need to do when you play FIFA 06 on the Nintendo DS is tell the game which of its 500-plus club and international teams is your favorite so that it can be set as your default team whenever you start a new match. In addition to the "kick off" option that lets you get in to a match quickly, you'll find a number of other single-player modes, including career, challenges, season, and tournament. FIFA 06 also supports two players using a single cartridge, or four players if each has a copy of the game.

The season and tournament modes let you guide your chosen squad through the real-life league or cup competition of your choice without really having to worry about the pressures of team management. If you relish the challenge of being a manager, however, then you'll want to check out FIFA 06's career mode, in which you'll take control of your chosen team for up to five seasons to fulfill certain objectives...if you want to keep your job (as well as gain manager prestige points). The objectives that you're tasked with at the start of each season will depend largely on your choice of team and previous performances, but they typically involve achieving certain positions in the league and progressing to the latter stages of cup competitions.

FIFA 06's career mode is pretty light in terms of the responsibilities you'll have on your shoulders, so although you'll be tasked with picking your team and tactics ahead of every game, you won't have to concern yourself with player salaries, media attention, or the transfer market. In fact, one of the biggest decisions you'll have to make before each match is whether you want to play it yourself, watch a text-based commentary of the match in "visual sim" mode (though you do have the option to intervene at any time), or simply use the "quick sim" option to generate an instant result. Given that there's not a whole lot to do as a manager, it's unlikely you'll want to simulate the majority of your matches in FIFA 06. However, the option can be useful if you're looking to progress quickly. At the end of each match (including simulated ones), you'll have the option to view highlights from every match played that day. The highlights are often quite spectacular, which can make you wonder why most of your goals never look as good.

One of the reasons your goals aren't as spectacular as those scored by the CPU is that even if you're playing on the hardest "world class" difficulty level, your goals simply don't need to be spectacular. As you move up through FIFA 06's four difficulty levels, you'll certainly notice your opponent's offence becoming more of a threat, but you'll still be able to beat the defenders with the majority of your through-balls, and the keepers you face will still be prone to deflecting shots rather than holding on to them. FIFA 06 on the DS doesn't afford you quite as much control over your individual players as other versions of the game, incidentally, and it also features a fatigue system that sees most players tiring if they hang on to or chase the ball for more than a few seconds at a time. The effects of fatigue on your players are so exaggerated that you'll feel compelled to pass the ball around when you're in possession of it, which isn't a bad thing, though it does feel a little artificial.

One of the best things about FIFA 06 is its use of the second screen during gameplay. While you're playing a match on the top screen, the touch screen will display a map of the field--complete with player positions--and a few buttons within easy reach of your right thumb that can be used to alter offensive and defensive tactics on the fly. There are only a handful of different tactical options available to you, but their effects are definitely noticeable, so they're worth experimenting with. The lower screen is also used to choose which of your players you want the ball to go to when taking a corner or a throw-in, in addition to being used to apply spin to the ball when you take a penalty or free kick at goal. All these are very different from the systems used in other iterations of FIFA 06. However, they work well.

FIFA 06's presentation rarely fails to impress. The menus are well designed and intuitive, the soundtrack and commentary are decent, and the in-game visuals and animations are about as good as can be expected. The manually controlled replays of goals are also worthy of mention, not only because you're able to position the camera just about anywhere you want to watch the action played back at different speeds, but also because the touch-screen interface you'll be using to do so is nigh perfect.

Even as the only Nintendo DS soccer game on the market, FIFA 06 can't be recommended unreservedly. This is not a handheld version of the FIFA 06 game you might have already played on the PC, PlayStation 2, or Xbox. Rather, it's a decent soccer game that lacks real depth but is fun to play solo or with friends all the same. 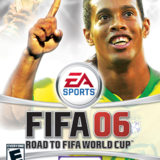