Because of the lack of characters and depth, this is one fighting game you'll probably want to avoid.

It wouldn't be fair to call Fatal Fury a Street Fighter II knockoff, given that SNK actually shipped the game to arcades a couple of months before people had the chance to plunk quarters into Capcom's now-legendary machine. Nevertheless, like Street Fighter II, Fatal Fury is a comic-book-style one-on-one fighting game where you have to punch, kick, and unleash special attacks to deplete your opponent's health meter. The game's unique hook is that you can move from the foreground into the background, as well as unleash attacks while leaping between the two planes. You and a friend can also play cooperatively against the CPU, which offers a nice change of pace from the standard versus mode (also included). Unfortunately, those wrinkles weren't enough to make Fatal Fury worth playing back in late 1991, and they seem even less remarkable now that SNK and D4 Enterprise have made the game available for the Wii's Virtual Console.

Sure, it's wonderful that people can now buy and download Neo Geo games for the Virtual Console. Even today, a used Neo Geo home console will cost you anywhere between $200 and $400, and some games still sell for upwards of $200. By comparison, 900 Wii points, or roughly nine dollars, is a bargain. However, Fatal Fury wasn't worth two bills back in its heyday, and it sure isn't worth nine bucks now. It's easy to be impressed by the large characters and the colorful backgrounds that change from day to night after every round, but the characters have only a small assortment of attacks, and those attacks generally don't chain together into what you'd call combinations. However, the real killer is that you're given only three characters to pick from. Regardless of whether you play against the CPU or a friend, the only characters you can choose are Terry, Andy, and Joe.

Fatal Fury does deserve credit for introducing fighting fans to characters such Terry Bogard and Geese Howard, and for paving the way for later sequels, as well as the long-running King of Fighters franchise. If you want to see that history firsthand and do decide to download Fatal Fury to your Wii, you can at least rest easy knowing that the emulation is accurate. The graphics are colorful and sharp, the audio clarity is excellent, and the screen dimensions and overall game speed match the output of a real Neo Geo AES console. Some people have reported that the video output goes black when they try to play the game on a high-definition display with the Wii's video output set to 480i, but many of them have also reported "fixing" that problem by pressing the home button to pause and restart the emulation. Hopefully, D4 and SNK will iron out the kinks in the emulator and continue to bring the Neo Geo library to the Virtual Console service, so that Wii owners will be able to enjoy all of the good fighting games that SNK produced in the years following Fatal Fury. 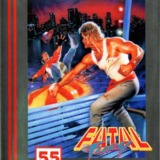