It's a port of one of SNK's last great NeoGeo games. It's also one of the last great games for the Dreamcast.

Publisher Agetec has made something of a name for itself by publishing ports of the Dreamcast port of The King of Fighters '99 by SNK didn't have this issue and will seem strange if you've played the original NeoGeo version, but it doesn't detract greatly from the game, and you'll get used to it quickly enough.

Mark of the Wolves for the Dreamcast could be described as a doubly nostalgic game--it's a port of one of SNK's last great NeoGeo games and is the last console port that SNK ever did. It's also one of the last great games for the Sega Dreamcast console, since the console itself will be discontinued soon. Considering all the newfangled 3D games that feature advanced graphical technology, it might not seem surprising that 2D games like this seem rarer and rarer these days. But if you own a Dreamcast and have any interest at all in 2D fighting games, you owe it to yourself to pick up a copy of Mark of the Wolves. 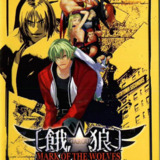