Since both Nintendo and Sony seem intent on not continuing their line of revered hovercraft racers (F-Zero and WipeOut), it’s good to know other developers are happy to pick up the slack. Witness Fast RMX, a digital-only launch title for the Switch, that fills this niche nicely. Astute racings fans may recognize this as the semi-sequel to the excellent if boringly named Wii U racer, Fast Racing Neo (itself the sequel to the Wii game, Fast Racing).

Admittedly, it’s likely not many will recognize this series at all, but given the dearth of launch titles for the Switch, maybe the game will finally get its due. Fast RMX resembles WipeOut, but plays more like F-Zero with its looser, more casual steering and physics. It’s a solid middleground between the two games, with some outrageously designed tracks and a frantic sense of speed.

For those who did play Fast Racing Neo, it should be noted this is essentially an upgraded version. It contains the previous game’s 24 tracks (including the DLC content) and adds six new tracks. This new version sports the same vehicles, three speed-based leagues, and game modes with the except of time trials, which are due to be added later. In Lieu of any world building or story, your only options are to hit the track for a quick race or work your way up the ranks in championship mode. Pick your speed machine of choice and head out to a variety of exotic and futuristic locales to take on the best of the best.

Fast RMX tracks represent a varied array of themes. You can race through sharp and shiny chrome-filled urban sprawls, ice-covered landscapes, jungles, deserts, outer space, and more. Environmental effects ranging from storms to asteroid strikes add flair as well, and make your task slightly more difficult than usual. Tracks typically feature roller coaster-like designs, with looping roads and massive jumps. At times, the tracks seem designed more for effect than skill, however, with off-kilter obstacles like hard to avoid giant turbines and jumps that are too disjointed and easy to crash against, especially when racing in the game's fastest leagues.

These races are brought to life with exceptionally good graphics--this is easily the best looking game on the Switch (at launch) next to Zelda. Vehicles are creatively designed and detailed, and the myriad of locations look terrific. The game also runs at 60 fps/1080p on your TV, even when playing split-screen multiplayer. The audio is more serviceable than exceptional, with an expected, if standard techno soundtrack.

The overall structure of the racing is a bit odd. The championship mode consists of three leagues (or speed classes), but all use the same 30 tracks. You only get one shot at placing in the top three on any given track within a championship, which makes the lack of a practice mode (or time trial) regrettable. Unlocking tracks in the championship mode also leads to the ‘Hero’ mode, where you have one life to race on a single track and must place first.

In Hero mode, your boost energy also powers your shield, so there’s an interesting dynamic between gaining more speed and preserving your ship. This all amounts to an intense alternative to the standard racing of the championship mode.

There are no weapons in Fast RMX, but absorbing energy from special pads on the track is vital. Energy comes in two flavors--blue and orange. You can phase shift your ship's energy field at any time between the two colors and the idea is to hit a pad with the corresponding field activated. So, hitting a blue energy pad while your ship is blue, gives you a massive turbo boost. Crossing a blue pad while your ship is orange will result in a loss of speed. Fast RMX gets a lot of mileage out of forcing you alternate phases in rapid succession, and makes the already fast races feel slightly more energetic.

Multiplayer support includes both eight player online and four-player split screen support, in addition to local online (where each Switch owner needs their own copy of the game). The split-screen play is excellent and highly customizable to get exactly the type of race you want. Online play works smoothly, but just throws you into a random game. Aside from players voting on the next track, there are virtually no options. There’s not even an ability to find friends or choose leagues yet.

So, Fast RMX isn’t as polished as the games it’s trying hard to emulate, but certainly isn’t a wash. It’s fast, looks excellent, and offers a great variety of tracks. The racing is fun, even if some of the track design is less than stellar. If the online multiplayer gets patched with more customization options, this will also make an excellent addition to the Switch’s scarce multiplayer options. 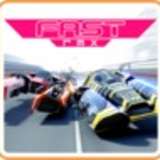 Jason D’Aprile spent seven hours speeding across the tracks of the future in Fast RMX, both online and off. Nintendo provided a complimentary download code of Fast RMX for the purpose of this review.