Saturated with control and gameplay issues, Fast Food Panic is junk food for your Wii.

Aspiring young chefs would do well to heed the important lessons that Fast Food Panic inadvertently delivers like a swift smack upside the head. If you don't know how to cook the meals you're asked to prepare or how to properly wield the tools needed to do so, you're bound to produce more than a few steaming plates full of burnt, awful-tasting rubbish. Even after you complete some quick tutorials, struggling with the confusing and imprecise controls during the first few minutes behind the grill in Fast Food Panic feels like trying to wrestle a greased ox--not something you want to be doing when you've got a dining room full of hungry customers. And just when you've finally tamed that beast, the game viciously pulls the rug out from under you with a few other unpleasant surprises.

Fast Food Panic aims to tap into the same foodie gaming audience that typically flocks to titles like Cooking Mama and Order Up. Though it lacks a substantive storyline, the game stars a nameless male and female chef duo seeking to kick off a new restaurant and skyrocket their culinary careers. You start out with a meager eatery that expands to larger digs as you progress through the early stages of the game. Successfully beefing up your restaurant eventually culminates in a globe-trotting trek to serve meals to fussy foreigners in distant countries. Much of the gameplay is a high-speed juggling act that has you balancing your attention between slaving over the hot grill to whip up some tasty grub and trying to placate grumbling customers armed with short fuses and picky tastes.

The two main characters graciously split the dining room and kitchen duties. However, you can directly control only one of them at a time, leaving the game's inept artificial intelligence to take over your partner's job. You can switch back and forth between them with a tap of the Z button, but attempting to micromanage all aspects of your operation is a futile task. Despite their stupidity, computer-controlled characters seem to be slightly more proficient at handling the customer service end of things. Stick them in the kitchen, and they'll plod away at a snail's pace, haphazardly slapping together meals that will make your clientele want to puke. It serves you well to stay in the kitchen where the real action is, not only because the AI is a lousy chef but also because other duties like greeting customers, taking orders, and serving food feel more like half-baked afterthoughts than legitimate gameplay options.

Several orders typically come in at once, and you can multitask and hop between dishes you're preparing by flicking the nunchuk's thumbstick. For example, you might throw some burgers and buns on the grill and then switch over to rolling out pizza dough while the burgers cook. Queuing up additional orders simultaneously gives you a bonus score and keeps you from falling too far behind. Sending the food quickly is as important as preparing it correctly, and doing a good job adds to your customer happiness meter. This overall score is tracked by a bar at the top of the screen. If the time meter fills completely before your score meter maxes out, you have to start the level over.

Every order is filled by completing a multistep sequence of minigames, and your accuracy at each step of the way determines the overall quality of your dishes. Figuring out how to prepare them is the first irritating obstacle to contend with. Extremely basic instructions can be found both in-game and in the manual, but they're too vague to be of much assistance. It takes a lot of trial and error to figure out how to complete some of the minigames and achieve a top rating. The other issue is that the controls often feel imprecise, and the moves aren't always intuitive. Flipping burgers, plucking and placing condiments, and popping a pizza in the oven are pretty straightforward tasks. Fiddling with boiling pasta on the stovetop, dropping stuff in the fryer, and cutting pizzas with precision are not. There's a lot of remote shaking and combined button pressing incorporated into the control setup that makes it unwieldy.

After much repetition, you'll eventually find the sweet spot with each minigame. There's plenty of opportunity to practice due to the startling lack of variety in the recipes available for you to cook. You'll start off with basic burgers and soon graduate to making pizzas, crepes, and pasta. Aside from a few variations within those four categories, that's it. This poor variety is a major misstep in a cooking-focused game. Instead of having a broader range of dishes to prepare, you get saddled with random minigame chore interruptions designed to break your concentration. It's a real annoyance when you're in the middle of cooking five separate dishes and have to stop what you're doing to go out and clean up an alley full of trash, help the wait staff tally bills, or wash dishes by hand. Other challenges designed to add something extra to the gameplay also end up getting in the way of the fun. Top chefs and food critics sometimes stop by and require you to impress them with your culinary skills. When traveling around the globe to cook, you'll also encounter some stereotypes like "picky" Parisians, "stubborn" Germans, and "ravenous" New Yorkers. These tough customers have specific requirements of their food, though it's not always easy to tell exactly what sets them off when they erupt in anger and force you to replay a level over and over again.

The dual responsibilities in the kitchen and the dining room could have been a great opportunity to integrate some cooperative gameplay, but the only multiplayer modes to be found are optional minigames that are unlocked as you play. These random exercises task you with completing activities like serving scoops of color-coded ice cream, putting out grill fires, and tossing pizza dough. They have no bearing on the main game, but they do offer some fun little diversions in short bursts.

This laundry list of grievances make Fast Food Panic sound like junk food for your Wii, and that's mostly true. After simmering in the game's numerous issues long enough for them to cook down a bit, the grind of intensely frantic and overstimulating food assembly can be somewhat enjoyable. But it's just not going to be enough to make you want to stomach the purchase. 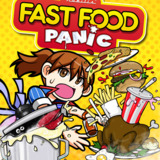