Spoiler alert: At the end of Far Cry 5, the United States gets nuked. Seventeen years later, the region and residents of Hope County have endured and mostly recovered from the devastation anew. The vegetation is more abundant, society has been reshaped, and there is a hell of a lot more duct tape everywhere. Everything feels new and different--well, except for that fact that there's ruthless, tyrannical oppression taking over everything and it's up to you, and basically only you, to stop it. Some things never change. That's Far Cry: New Dawn--despite a few new novelties and a great mechanical twist, New Dawn feels exactly like what it is: a direct continuation of Far Cry 5.

That's not inherently a bad thing. New Dawn features the same kind of forward-thinking approach to open-world exploration and progression as Far Cry 5. While main missions are mapped out for you, the discovery of side activities like enemy outposts, treasure hunts (formerly prepper stashes), and companion recruitment missions mostly comes from your own organic exploration. Earning perk points to improve your abilities is tied to your discovery of hidden caches and diversifying the activities you undertake. New Dawn is a more concise game--the map is smaller than Far Cry 5 and there's less curated content to discover this time around--but the emphasis is still on staying out in the world and soaking up the environment.

That sense of freedom has been diminished, however. It's not the fact that you're revisiting Hope County, but rather how New Dawn sets up the pins. In Far Cry 5, you began in the middle of the map and were allowed to explore in any direction you wished; New Dawn starts you off in the bottom corner of the map and basically pushes you in a steady, linear sweep north as you slowly reclaim territory, and asks you to regularly bring resources back to your base in that starting area to bolster it.

What's to stop you from just darting ahead? Well, damage numbers. New Dawn introduces RPG elements, like damage numbers, into its design for the first time in the series. The game's guns and enemies fall into four different tiered ranks, and getting ahead requires that you go out into the world to scavenge crafting materials to upgrade your base so you can upgrade your weapons workshop and eventually craft better guns to take down the higher rank enemies impeding your progress. Outfits, armor, and defense numbers don't factor in your growth, just weapons. Guns at rank 1 and 2 will do a minimal amount of damage to well-armored rank 3 and elite rank enemies.

Early on, this can be annoying if you try to push the limits of the game in a way you're not meant to. Heading too far into the map and needing to use up hundreds of bullets to take down a rank 3 bear you encounter isn't terrifying as much as it is silly, and eventually, the demands of story missions will stop you from going too far.

But if you dial down your Far Cry 5-style expectations of freedom and go with the flow, you run into these awkward predicaments far less often. Your guns feel like they do the damage they're supposed to, and enemies feel like they have an acceptable level of resistance. In fact, once you get access to the top-tier arsenal, things will start to swing wildly in your favor--your guns will feel overpowered to the point where even shooting rank 1 enemies in the foot might be enough to take them out--which feels great when you're getting overwhelmed. Played the right way, the game's RPG-style systems basically feel invisible, and you can enjoy Far Cry's style of weighty gunplay and feel like an incredibly competent one-person army. The feeling of eventually being able to overcome New Dawn's elite enemies is good, but you're left wondering why you needed to be held back by artificial gating at all.

It doesn't help that there's no tangible sense of growth with weapons and vehicle crafting; New Dawn's selection of guns and cars isn't dramatically different enough between ranks to make the large distinction in damage output believable. Rank 1 weapons are a varied suite of handguns, rifles, and shotguns, and higher-rank arsenals are basically defined by the increasing amount of duct tape and junk on that same suite, as if that stuff has magical properties that makes the guns perform better. There are lots of guns to choose from, but if you've played Far Cry 5 you'll immediately recognize them, duct tape or no.

The one nice exception is the new Saw Launcher, which shoots circular saw blades. Higher tier versions of the weapon actually have noticeably different properties, like the ability to shoot saw blades with ricocheting, homing, and boomerang traits. It's the only weapon which truly feels like it was borne out of the post-apocalypse, improvised from scavenged parts. Aerosol cans, pipes, and spray paint might give the other guns and cars a cool look, but it doesn't change how familiar they feel.

The same can be said of the world itself. Far Cry 5's Hope County already felt a bit post-apocalyptic--the rural setting was isolated from the world thanks to antagonist Joseph Seed--so even though there are plenty of visible differences to the region, the impact of those changes isn't massive. There are a few key locations that provoke some amusement in their discovery, but the strength of Far Cry 5's Hope County was its natural environments--the forests, lakes, rivers, and mountains. The conceit that the region was re-vegetated by a super bloom after nuclear devastation means that the vibe in New Dawn is basically identical, despite dramatic increases in upended cars and graffiti. It's a pretty post-apocalypse, but it doesn't have the feeling of desperation you might associate with the theme. Scavenging for materials doesn't feel like a drastic necessity, just a way to get ahead. New Dawn doesn't feel like it takes the theme to enough of an extreme to feel meaningful or different.

The solid bones of Far Cry's combat are still here, though, and they're still very good. Taking on outposts (within your rank), whether that be via stealth or aggression, is still enjoyable, and the game encourages you to repeat them at increased difficulties to earn more resources. New Dawn also introduces seven self-contained missions called Expeditions. These are large, diverse maps set outside Hope County, and they feature setpieces like a New Orleans amusement park, an aircraft carrier, and even a Splinter Cell-themed plane crash. Expedition environments are a highlight, but the snatch-and-grab objectives mean that you're never really encouraged to stop and appreciate them--you're more concerned with getting the hell out of there as a non-stop stream of enemies comes after you.

The concise nature of the game means there's a remarkable lack of time given to the characters and plot, too. A few of the major characters feel like they could be interesting, the twin sister antagonists especially, but the few interactions you have with them are definitely not enough to develop them and make you care. While the performances have gusto, key moments of pathos just feel completely unearned. Something major happened to a key character and I was surprised how little empathy I felt. A detestable deal is made and I was mad at how little time they spent justifying it. Underdeveloped connections to characters also exacerbate the relative mundanity of the story missions compared to the game's side and open-world activities--turret sequences, bland chases, forced melee fights, and even a slow boat ride, all of which go on for way too long.

You do get a double jump, though. That is, the ability to jump in mid-air. You also get the ability to basically turn invisible and give yourself super speed and strength. The Far Cry series has always dabbled in the mystic, but yes: In a strange turn of events, New Dawn eventually says "screw it" and gives you access to superhuman powers. And the way it changes how you approach the world is undoubtedly the best thing about the game.

These sudden powers let you lean hard into superhero fantasy, allowing you to bound over fences and onto buildings, using your newfound mobility and invisibility to completely terrorize enemies like you're the Predator, or perhaps jumping high into the fray and firing off explosive arrows, pretending you're Hawkeye from The Avengers. Maybe you're more of a Wolverine, activating the berserker ability to rush an outpost at super speed and send heavily armed assailants and bears alike flying with your bare fists. A minor new mechanic lets you temporarily pick up shields from enemies and toss them like you're Captain America (supporting characters even refer to you as "Cap"), and I'm shocked they didn't do more with this--the inability to permanently keep a shield is a big disappointment.

The powers are so good that it's almost a shame they come at a point late in the game where you'll likely already be well-equipped to deal with elite rank enemies, since a few scenarios that challenge your ability to use these effectively definitely would have been a welcome addition. But as it stands, they're a fantastic expansion of Far Cry's combat vocabulary. They completely elevate your confidence to rip through everything and everyone, suddenly turning New Dawn's familiar, pedestrian experience into a raucous blast.

There's a lot of potential in the ideas seeded in New Dawn, but there isn't enough room for many of them to breathe and feel fully realized. Not the post-apocalyptic theme, not the RPG mechanics, not the weapons, vehicles, plot, or characters. Advancing through the adventure is an enjoyable experience, especially once you get your superhuman powers, but this is largely because Far Cry 5's combat and progression models remain compelling enough to propel you forward. For its part, New Dawn is a palatable but unremarkable spin-off that feels like it could have achieved so much more.

View Comments (196)
Back To Top
6
Fair
About GameSpot Reviews 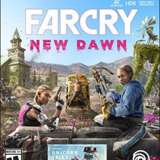 Edmond is one of those people who likes Far Cry 2. But he really enjoyed Far Cry 5 too, for all its faults. He took roughly 25 hours to hit 100% completion on New Dawn. Codes were provided by Ubisoft. 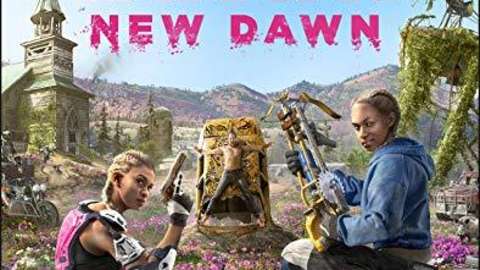