It may be old-school, but Fantasy Wars isn't behind the times when it comes to providing satisfying, albeit spectacularly tough, turn-based strategy gameplay.

Surprises are rare in Fantasy Wars, but this wargame with elves and orcs sure delivers when it comes to traditional turn-based strategizing. Developer Ino-Co has created both a paean to the past and a great antidote to overcaffeinated real-time strategy games. Missions here make you think, not just exercise your index finger. Intricately designed maps feature loads of carefully placed opponents, plentiful units boast numerous upgrades that let you build whole custom-crafted armies, and the easy-to-use interface makes it a snap to play in general. The only issue is difficulty that soars past merely challenging and into territory usually reserved for the masochistic.

Most elements of the game are engaging right from the beginning. Story and setting are derived from the usual Tolkien derring-do filtered through decades of D&D. Three campaigns are told from the points of view of humans, orcs, and an elven alliance (the usual suspects). There are also a handful of one-off skirmish maps and a couple of multiplayer modes of play available for hotseat matches, as well as over LANs or direct net connections (there is no online matching system, so you're on your own looking for opponents). Gameplay mechanics follow the turn-based strategy template. You direct typical medieval military units ranging from infantry and bowmen to mages and siege weapons. Everything takes place on a 3D hex map that requires little camera fiddling to keep all units in sight and the interface perfectly spells out need-to-know information. For example, information might include how far units can move during turns and what the results might be in specific battles. Because so much is right at your fingertips and you rarely have to pause to look up stats, the quick-flowing action keeps you immersed in tactical considerations, not interface busywork.

As with the story and setting, there isn't anything new here when it comes to units. You've got cavalry, halberdiers, bowmen, warg-riding orcs, magic-using shamans, ballistae, catapults, and so on. Heroes serve as the commanders of each side, as powerful allies, and as your avatars in that the deaths of such leading characters as the human mercenary general Derrick Pfiel or the orc general Ugraum cause you to instantly lose missions. The only change-up thrown into the mix comes from aerial units, such as giant eagles and orc dirigibles (oh, the humanity), that can bombard ground targets. All units gain experience in battle and level up. This adds a strong role-playing element to Fantasy Wars in that you select from various perks unique to each unit type with each gained level. These perks deal in pretty standard stuff that gives bonuses to attack, defense, morale, and the like, but there is enough variety here that it doesn't feel like you're just going through the motions. Skills have been customized for each unit, so the orc archers get to take poison arrows, human militia can adopt brigandine armor, heroes can become expert jousters or siege masters, and so forth, providing an atmosphere of outfitting a real army instead of picking generic character buffs. Recruiting is also fairly realistic. There is no hokey base building, so you buy mercenaries with coins looted from conquered fortresses and villages.

Serious difficulty casts a shadow over everything, though. Each campaign starts off with the cakewalks that you might well expect from the early stages of a strategy game but then skyrockets to absolute craziness by the fourth mission even on the easiest setting. Because the passive artificial intelligence generally hangs back and waits for you to attack (at least most of the time, at any rate, because there are moments when multiple enemies display serious smarts and tag-team your key units), Fantasy Wars compensates with mobs of enemy troops that wear you down over time through sheer weight of numbers. So it doesn't matter that the computer doesn't always know enough to attack your hero when he's near death. Nor is it all that important that the AI often ignores units causing it heavy damage, such as the spear-throwing siege weapons sitting just outside castle walls. It isn't even a big deal that computer-controlled aerial units typically just fly back and forth instead of attacking. In the end, when you're constantly pulling hordes of cavalry, bowmen, and catapults out of your sleeves, you don't need to be all that smart.

As a result, many missions are tough to beat without some serious trial and error. Short mission briefings never let you know what to expect in the mission ahead, and cash is always in such short supply that it's impossible to prepare for any eventuality. Playing jack-of-all-trades and building a mixed force isn't a great idea either because you inevitably wind up with some troops fighting the wrong sort of opposition or taking casualties early on that you can't afford. All you can really do is hold on to as much cash as possible in the beginning and use it as a bank to buy reserves on the fly in case you run into a tough spot later. But this forces you to start with a small army, which can cause a lot of losses in the early stages. If you try to save for the latter stages of a mission, chances are you won't survive long enough to get there.

Even if you do survive a mission, there is a real possibility of taking so much damage that you won't stand a chance in hell of beating the next one. Units and cash carry over from one mission to the next in the campaign. This means that you start with your back up against the wall if you barely scraped through a level with a few units and a handful of gold. Losing experienced units with their added combat perks is also a big killer because any fresh recruits are, of course, level-0 rookies. Most missions help you out in the early stages with a hero or some troops that can be picked up on the cheap by conquering a tiny village or something, but this assistance usually comes in the form of a low-level unit that just isn't enough if you're starting with, say, a hero and a few archers. So even when you win, you often lose.

It seems like you're simply not meant to wrap up a mission in Fantasy Wars in just one run-through. At the same time, however, it doesn't feel like you're being cheated. If you play smartly, you will often come close to victory or achieve a fair number of pyrrhic victories, which only spurs you to keep playing the game and really think about what tactics are needed to master certain maps. This is one of those rare cases where extreme difficulty makes you appreciate the game all the more. There are even gold, silver, and bronze medals offered for beating missions in set numbers of turns, which is a further incentive for replaying.

You'd never know that battles were so murderous here by the look and sound of the battlefields. Visuals are decidedly cartoony, with lots of bright colors and cotton-candy skies more reminiscent of fairy tales than the many grim, goth-inspired contemporary RPGs out there. The same goes for the one-note music and audio effects, which are dominated by a triumphant "A-ha!" every time somebody kills an enemy unit. It's all suitably retro, which works really well given the gameplay...unless you're a stickler for cutting-edge video and audio.

Wearing its old-fashioned origins like a badge of honor, Fantasy Wars is aimed at veteran gamers who remember the days before the real-time revolution. But more than just nostalgia buffs will appreciate its intricate mission design, detailed units, and outstanding interface. It sure helps if you're old enough to have played such classics as Fantasy General back in the day, especially because the difficulty is aimed at turn-based vets. Still, you don't need to have any previous experience to get into such timeless game concepts as these. 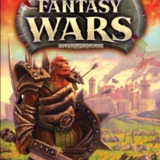