There's nothing fantastic about this movie tie-in.

It's no secret that games based on movies often get a bad rap. It's also no secret that games based on movies that are based on comic book characters tend to be among the worst offenders when it comes to portraying their source material. Fantastic Four: Rise of the Silver Surfer for the PlayStation 3 and Xbox 360 does little to buck that trend. There's nothing inherently broken with the game, and until it fizzles out at the end the story's not bad, but the gameplay is so contrived and repetitive that it's unlikely anyone will garner much enjoyment from the game.

Fantastic Four loosely follows the plot of the movie, but it takes several liberties with the story. As in the movie, Reed (Mr. Fantastic) and Sue (Invisible Woman) are all set to get married when the Silver Surfer and Dr. Doom show up and complicate matters. Galactus, unlike in the movie, where he plays an integral role, is mentioned in the game but never makes an appearance. This omission means the whole plot falls apart at the end of the game, which is a shame because, until that point, the story is pretty good.

FF: Rise of the Silver Surfer is a standard beat-'em-up. You can play alone and switch between characters by pressing the D pad, or you and up to three friends can play together on a single system. You'll play as Mr. Fantastic, Invisible Woman, The Thing, and Human Torch as they brawl their way through the game's six levels, which will see you do battle in locations such as the Skrull lair, outer space, New York City, and Shanghai. The locations may be exotic, but the mission objectives certainly aren't. You'll spend most of your time activating doors so you can deactivate lasers so you can activate an elevator so you can activate a door, which lets you do it all over again. There are a few levels where you'll fly through barren caves and a repetitive subway system with Human Torch. Simply put, these levels are awful--though they're a tiny bit better when playing with the Sixaxis' motion-sensing controls.

All the characters have basic strong and weak attacks, and if you mix up your attacks you can string together combos. Of course, each person has special powers that you'll need to use from time to time. Invisible Woman can turn invisible and use telekinesis; Mr. Fantastic can stretch and bend to hit hard-to-reach switches; The Thing can lift heavy objects and damage bad guys by pounding the ground; and Human Torch can toss fireballs and even fly. Unfortunately, the game does little to take advantage of these superpowers. Human Torch can fly like a bird during cutscenes, but he's limited to an altitude of about 15 feet when you're actually playing. The Thing can smash his way through a few walls here and there, but most items in the game are impervious to his strength. Mr. Fantastic is generally useful only for hitting switches that are high up, and Invisible Woman is pretty worthless as well, able to go through only some lasers and not others.

Unbalanced characters negatively affect the game's upgrade system. By smashing certain objects you can earn tokens, which can be used to upgrade the abilities of each character. However, you'll quickly learn that The Thing's shockwave attack, where he pounds the ground and takes out all enemies in the immediate vicinity, is the best way to make it through the game. Human Torch's ability to throw fireballs also comes in handy, so you'll most likely power up those two characters and those two specific abilities and do little with Mr. Fantastic and Invisible Woman. The game tries to encourage you to balance out your characters by sending each person on a brief solo mission, but as long as you've got their attack and defense leveled up a bit, each character should do fine on its own.

Fantastic Four's visuals are just as bland as its gameplay. Most rooms and areas are barren and look nearly identical to one another. This makes it hard to figure out where you're going and where you've been--a problem, given all the backtracking you'll be doing. The enemies you'll be fighting look decent enough, but there's little variety to their looks, so you'll be fighting the same few guys over and over again. The Fantastic Four don't look too hot themselves. It's not easy to make Jessica Alba look unattractive, but Visual Concepts has done it. The camera frequently has problems following the action and often ends up at the worst possible angle. When you're just running around a room or fighting one or two foes the frame rate is fine, but as soon as you throw a bunch of bad guys and a few lighting effects into the mix, it falls apart. All the characters are voiced by sound-alikes who do a respectable job in spite of the amateurish script. The sound effects and music aren't much to get excited about, either.

While it may often feel endless, Fantastic Four is a short game that can be beaten in around six hours. The typical assortment of extra costumes, artwork, movie trailers, and the like can be unlocked by finding tokens hidden in each level, but once you've finished there's little incentive to play through again, though you can earn more achievements by doing so since it lets you finish powering up all of your characters.

In the end, it's difficult to recommend Fantastic Four to anyone. Fans of the comic book and movie will likely be frustrated by the limited abilities of the main characters, and everyone will be let down by the generally unexciting, repetitive gameplay. 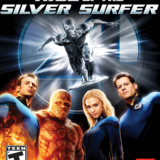 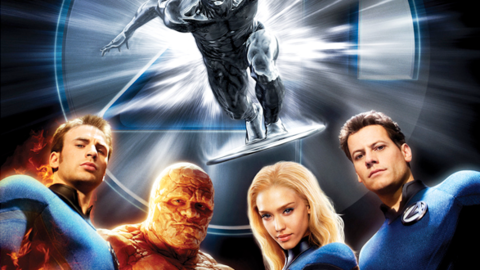 Fantastic 4: Rise of the Silver Surfer is based on the 2007 movie of the same name.

4.5
Sign In to rate Fantastic Four: Rise of the Silver Surfer