Fallout is one of the best role-playing games to be released in several years.

Fallout is an unofficial sequel to 1987's Wasteland, one of the most popular role-playing games of all time. While the overwhelming majority of computer role-playing games are set in some pseudo-medieval, Tolkien/AD&D-inspired world of orcs and battleaxes, Fallout is set in the future, several years after an exchange of nuclear weapons has devastated most of the world. Inhabitants who survived did so largely by sheltering themselves in giant underground vaults. Your character's life has been spent entirely within one such vault. A broken chip for your vault's water recycler forces your character to leave the relative safety of the vault to search for a replacement chip aboveground in the wasteland, where you'll encounter struggling communities of survivors, Road Warrior-esque gangs, human mutants, and even stranger creatures. Hardly a typical setting for a role-playing game, but the originality of the setting is one of the strengths of Fallout. In Fallout, rather than trudging through yet another dreary dungeon, in search of ye olde magic artifact to expel demon horde #782, your character will explore the haunting remnants of our own civilization and attempt to unravel the mysterious forces at work in postapocalyptic Southern California. The old 90210 neighborhood has changed, gang violence is rampant, two-headed cows roam Rodeo, and the new fashion accessory is a rocket launcher. And if the guns of the locals don't get you, the radiation might. Brandon, Kelly, why are you glowing like that?

Fallout oozes style. Not content with extrapolating a plausible but unexciting hi-tech view of the future, Fallout's design team instead crafted a vision of the future that combines 1950s cold war American culture and early, primitive computer technology (complete with ugly green monochrome screens and an abundance of vacuum tubes), with advanced energy weapons and chemical compounds. Nuka-cola anyone? Special mention should be made of Fallout's classy introduction, which unfolds like a 1950s Public Service announcement but depicts a future that is disturbingly bleak and hostile. Little tributes to classic science fiction films and TV shows such as Dr. Who, Road Warrior and Blade Runner pop up all over the place. Fans of Charlton Heston's cheesy science fiction filmmaking days will enjoy the opportunity to yell out Charlie's best lines from Soylent Green.

Negotiations to allow Fallout to utilize Steve Jackson Games' popular GURPS character system fell apart, but Interplay's replacement character creation system is detailed and thorough. Almost every time a computer game is released that purports to be a role-playing game, a seemingly inevitable onslaught of debate ensues over whether or not that game is, in fact, a role-playing game (as opposed to a member of some presumably inferior wanna-be genre). Fallout will likely avoid being the subject of such "meaningful" arguments, as the variety of characters that can be created and the truly different experiences that each type of character can have should satisfy even hard-core RPG players (and also make Fallout a very replayable game, which is fortunate since the main storyline can be completed relatively quickly).

Interaction with nonplayer characters (NPCs) is a bit disappointing. Most of the nonplayer characters in Fallout aren't big on conversation and run around blithely and inconsequentially. Shades of the early Ultima games from Richard Garriott and Origin Systems, Stationary NPCs are generally important and will engage in menu-driven conversations. Mobile NPCs, on the other hand, will bark a short message at your character, which will be randomly chosen from three or so available options for that location. Occasionally, you will run into a more outgoing NPC with a larger vocabulary who will be presented as an animated puppet head, and these exchanges will usually give you a chance to decide whether you want your character to act as a hero or a villain. As always being evil can be fun (er, at least in computer games), but it will also lower your character's karma, or reputation, which will affect the way NPCs treat you.

Although you only control one character in Fallout, you can convince certain NPCs to join you in your quests, but you'll never be able to directly control their actions. Unfortunately, these NPC companions tend to take particular delight in blocking doorways or shooting you (and each other) in the back with semiautomatic weapons. You also won't be able to directly access your companions' inventory or otherwise instruct them to give you items or to equip better armor. Give an NPC a key item and you'll have to barter or steal from the NPC in order to get it back. Ingrates.

The gaming world is presented from an isometric perspective and the graphics are detailed and extremely similar in style and quality to Origin's Crusader games. A sighting bubble, which surrounds your character, ensures that you'll never lose track of objects that would otherwise be obscured as a result of the game's isometric perspective. The settings are suitably apocalyptic and ironic (junked cars are everywhere, but the prevalent mode of transportation is a two-headed cow caravan). Music is also well done throughout the game, with each setting having its own distinct and often haunting melody. Sound effects are less memorable, but adequate. The game's interface works well once you get over the initial learning curve and master using the various cursor modes. The inventory screen, however, is somewhat awkward, as it requires you to page down a relatively narrow display in order to view everything you're carrying.

The world moves along in real time until combat is initiated. There is a large variety of weapons to choose from, including pistols, rifles, machine guns, rocket launchers, flamethrowers, and plasma guns, and each is capable of killing your enemies in a suitably distinct graphical manner. Combat is strictly turn-based and becomes quite tactical, complete with character initiative, action points, and varying attack modes. It's very satisfying to halt an advancing enemy by targeting the enemy's legs with your sniper rifle. Targeting works even on nonhumanoid enemy types, so if you've ever dreamt of kicking a giant rat in the groin, here's your chance...

Although Interplay has recently released a bug-stomping patch, there are still a couple of annoying bugs in Fallout that may force you to backtrack and try certain tasks again. As the excellent and conveniently spiral-bound manual (the Vault Dweller's Survival Guide) suggests, save often. Gameplay is generally delightfully nonlinear, but occasionally the game's chronology gets garbled and quests are presented in an illogical sequence that can result in some inappropriate NPC conversations. While none of the remaining bugs will prevent you from finishing the game, they can make it impossible to successfully complete certain quests.

Even though these minor flaws bring Fallout's overall rating down a notch or two, Fallout is not only a worthy successor to Wasteland, it's also a role-playing game that is destined to become a classic in its own right. Fallout's detailed graphics, compelling plot, and intuitive gameplay should deservedly broaden its appeal beyond the hard-core role-playing game audience. Put simply, Fallout may be the best role-playing game to be released in years. 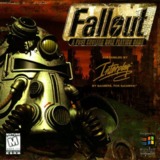