It's basically a simple, mildly entertaining, and somewhat uneven quasi-futuristic dungeon crawl for one or two players.

Ask just about anyone that's tried it, and they'll tell you that Fallout is one of the best games they've ever played. Interplay's 1997 computer role-playing game featured truly open-ended gameplay but without compromising the quality of its excellent storyline. It also featured a memorable cast of characters, a unique premise, enjoyable turn-based combat, and lots of replay value. In particular, Fallout's quirky postapocalyptic setting--which is kind of like The Road Warrior with a self-conscious dash of Leave It to Beaver--left a lasting impression on many players. It's this setting that's the star of Fallout: Brotherhood of Steel, which could easily be described as a hack-and-slash action game were it not for the fact that you'll use things like shotguns and laser rifles instead of swords and axes to do your dirty work. More specifically, Brotherhood of Steel is clearly inspired by and closely resembles Interplay's outstanding action RPG, Baldur's Gate: Dark Alliance--but it's not as impressive. Fallout fans will find that this game is fairly faithful to the spirit of the series, except for the relentless use of profanity in its dialogue, so it's basically a simple, mildly entertaining, and somewhat uneven quasi-futuristic dungeon crawl for one or two players.

Brotherhood of Steel features a linear campaign, which can be played through by one or two people. Players assume the role of initiates in the Brotherhood of Steel, a faction of futuristic "knights" attempting to bring some order to a postnuclear world-gone-wild. Initially, three characters are available: a woman named Nadia, a tough guy named Cyrus, and a mutant "ghoul" named Cain. Additional characters are unlocked as you make your way through the game, but all of them play roughly identically. In practice, the characters don't even look very different, since they appear quite small on the screen. The game's plot has you trying to track down your Brotherhood comrades, from whom you were separated. In so doing, you'll free a village from some ruthless raiders, confront ghouls in an overrun city, visit one of the vaults in which humanity saved itself from nuclear destruction, and uncover a super mutant plot, among other things.

The gameplay of Brotherhood of Steel mostly involves running around enemy-infested environments and slugging it out with just about everything that stands in your way, while using the Fallout equivalent of health potions--called stimpacks--whenever you're low on health. You may have three different weapons on hand at a time, so it's easy to switch between ranged and melee weapons on the fly, for instance (using the black and white buttons to cycle through them). In addition to attacking, you can jump (there's a good bit of bottomless-pit-leaping in this game), crouch (which is a more or less worthless ability), and execute quick evasive maneuvers in one of four directions. You may also target your nearest foe using the right shoulder button, who'll become outlined in red (or blue for player two), which allows you to automatically keep a bead on him while firing at him with whatever ranged weapon you have on hand. You might have to tap the targeting button a couple of times if you're surrounded, but often, you can just lay on the targeting and fire buttons, and you'll automatically kill everything in your vicinity. You don't have to stop what you're doing to use stimpacks, either. As such, the action in Brotherhood of Steel is pretty mindless (though toggling on the friendly-fire option in two-player mode can make things a bit more interesting). Hack-and-slash games shouldn't be complicated, but that doesn't mean they shouldn't have any depth.

Brotherhood of Steel isn't a long game, and it weighs in somewhere close to 10 hours from start to finish. However, it feels pretty long because the nature of the gameplay is very repetitive. You'll face different types of foes, and Fallout fans will recognize some of them, especially the radscorpions, the super mutants, the ghouls, and the deathclaws. Despite the variety, these enemies all adopt one of two types of tactics. If they have ranged weapons, they'll shoot at you, and if they don't, they'll run up and try to hit you at close range. A few later sequences have you escorting or traveling alongside a computer-controlled ally of some sort, and there's a bit of light puzzle-solving. Also, there's a small handful of interesting scripted events that occur in some of the stages, and there are a few stages that have you facing multiple types of opponents that want to kill each other as much as they want to kill you. But these are relatively rare exceptions, and the core gameplay of Brotherhood of Steel remains simple and constant throughout the experience.

The action-oriented gameplay is occasionally interrupted by dialogue sequences, which seem overly drawn-out--so you'll probably find yourself skipping over the speech and skimming the text so that you can proceed to the next fight posthaste. Fallout fans might appreciate appearances by a few characters from the original, though they might not immediately recognize these characters since Brotherhood of Steel evidently takes place some decades after the conclusion of the first game. Some Fallout fans are also going to be put off by the incessant use of profanity in the dialogue.

Fallout was, by all means, a mature-themed game. In particular, it featured some extremely over-the-top violence. However, it wasn't crass. For some people, graphic depictions of violence are just as tasteless and offensive as prodigious cussing and other profane dialogue. Whatever the case, Brotherhood of Steel trades Fallout's visceral feel for a lot of four-letter words (though to be fair, the dialogue can be pretty funny at times). This is actually too bad because, certainly, one would sooner expect intense action sequences than lots of swearing from a game like this. Some of the weapons in the game do seem to pack a wallop, but enemies on the receiving end tend to just keel over dead, or they pop like balloons rather than getting cut to ribbons as in the original Fallout. And even though you'll be facing some surprisingly large foes late in the game, they animate too quickly for their size and therefore never really look as big and imposing as they should. The action has a decent feel to it, overall, but it could have packed more of a punch.

Brotherhood of Steel offers four different difficulty settings, the toughest of which is unlockable. At the default setting, the game's difficulty is rather uneven. The first two-thirds of the game are pretty much a cakewalk, since most of your foes will have a hard time inflicting any serious damage on you, and you'll earn tons of money and find more stimpacks than you need. Save points are everywhere, too. Then, rather suddenly, things get tough--not too tough but drastically more difficult than anything prior. This may take you by surprise, because if you run out of ammunition or stimpacks in this stage of the game, you may find yourself at an impasse. Also, the occasional keyhunt-style sequence can be frustrating. You'll need to access a locked door of some sort, but unless you kill a specific enemy and notice that it drops a tiny key--and subsequently pick up that key--you might wander around aimlessly while trying to figure out where you're supposed to go next. Fortunately, an onscreen automap mostly does a good job of pointing you in the right direction.

The role-playing elements here are even lighter than those of Baldur's Gate: Dark Alliance. You gain experience levels from killing lots of stuff and from solving quests, which earns you points that can be spent on various perks for your character. These may increase your potential to inflict damage, or they may increase your health or armor. They may also grant a few special abilities, which aren't very special. And that's basically it. You don't have to think about any statistics or anything. Additionally, the game's variety of weapons and armor just keeps getting more powerful the farther you get into the game. So there really aren't any interesting decisions to be made about how to outfit your character. Furthermore, you can't rely too heavily on a single type of ranged weapon, for fear of running out of ammo, so you'll invariably end up using a combination of ranged and melee weapons to get the job done.

Brotherhood of Steel looks pretty good, and the Xbox version looks predictably sharper and cleaner than the PS2 version. Fallout fans will recognize that the settings in the game are reminiscent of the series' gritty locales. However, the presentation is pretty uneven. The occasional cutscenes that use the game's 3D engine look quite poor, and the close-ups of the character models (seen during dialogue sequences) look pretty shoddy, too. At least the game maintains a relatively smooth frame rate, even when lots of bad guys are onscreen. Fallout fans will also notice that much of the artwork from previous games in the series was recycled for texture maps in Brotherhood of Steel. Some of these throwbacks are nice, but they also seem a bit lazy. Less forgivable is the excessive product placement for a certain caffeinated soda. One of the few advantages of a nuclear war would be the elimination of overbearing and invasive advertisements, wouldn't it?

The game's audio seemingly could have been better with a little more tuning. On their own, the sounds of combat and the voice acting are quite good. For instance, veteran voice actor Tony Jay lends his talents to the game. Additionally, the game features licensed music from a number of metal bands, such as Slipknot and Skinlab, though you wouldn't necessarily know it just from playing through the game. That's because Brotherhood of Steel seems strangely silent. Most of the time an ambient score plays almost imperceptibly in the background, but it jarringly switches over to guitar riffs during the occasional boss battle...and when you die. Overall, the game sounds fine, but the audio seems like less than the sum of its parts. 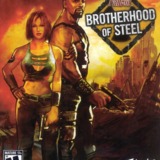 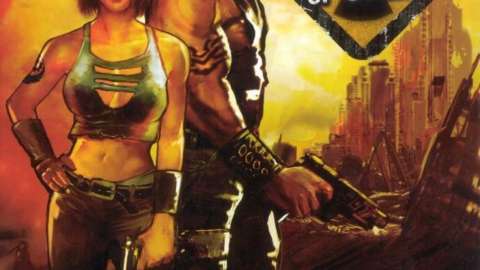 It's basically a simple, mildly entertaining, and somewhat uneven quasi-futuristic dungeon crawl for one or two players.