The core elements of 1997's best role-playing game are intact and, in several ways, have been improved.

The original Fallout provided gamers with the opportunity to truly "role-play" a variety of highly personalized characters in a stylish, postapocalyptic setting. Since Fallout was almost universally heralded as 1997's best role-playing game, it's not surprising that developer Interplay Productions decided to quickly follow up on the success of the original game with a sequel using a substantially similar game engine. Fallout 2 improves the already impressive tactical-combat and character-development systems of Fallout, allows gamers to explore a more expansive gaming world without imposed time constraints, and accordingly, is in many ways an even better game than its predecessor. However, the initial release of Fallout 2 is also afflicted by a number of bugs and other gameplay quirks, which suggests that the game was released before it was thoroughly play-tested and debugged. But even though Fallout 2 was released prematurely, it still delivers an outstanding role-playing experience.

Fallout 2, like the original game, combines real-time movement with tactical, turn-based combat. The isometric perspective graphics engine is now capable of a couple of new tricks, such as depicting "glowing" torches and similar items, but is otherwise almost identical to the one used by its predecessor. While there are a couple of new tunes, the haunting and apt music is largely recycled from the original game. Fallout 2 is essentially a "more of the same" sequel that adopts many aspects of the original game with only minor tweaking, but the development team did make a number of notable improvements to certain elements of the game's design. Many gamers thought that Fallout's gaming world was too small, which allowed players to speed to the game's conclusion relatively quickly, at least in role-playing game terms. In fact, you were somewhat forced to zip through Fallout's world because the game's main objective had to be completed within a relatively restrictive time period. Fallout 2 more than adequately addresses such concerns, as it features a significantly larger gaming world that you are free to explore at your leisure, no longer encumbered by the requirement to complete the game within a specified amount of playing time.

In Fallout 2 you assume the role of the Chosen One, a tribal ancestor of Fallout's vault dweller, 80 years after the events that transpired in the original game. Your character's people have carved out a modest settlement in an isolated corner of the futuristic Californian wasteland, but they realize that their attempts to eke out a meager existence are doomed to failure unless they find a "Garden of Eden Creation Kit" to revitalize their village. While your character's main quest is to retrieve a GECK, in the course of your search you'll encounter assorted communities of misfits and monsters, ranging from opportunistic gangsters and elitists willing to exploit the less fortunate, to radiated, war-time survivors, supermutants, and evolved critters. You're given plenty of opportunities to interact with those communities in a variety of ways, and helping out one community or faction may ultimately bring misfortune to others. Somewhat ironically for a sequel, Fallout 2 features one of the most refreshingly original worlds seen in a role-playing game, and you can explore it in an almost completely nonlinear fashion.

Perhaps even more so than its predecessor, Fallout 2 contains dozens of subtle and more often not-so-subtle references to cult movies, television icons, and other aspects of popular culture. You'll likely recognize characters and elements from varied sources such as professional boxing, Monty Python, Martin Scorsese films, and Scientology, all incorporated into the sometimes strangely familiar world of Fallout 2. With a brothel in nearly every town, a variety of sexual character traits and perks, foul-mouthed companions, and the Dirty Harry-esque ability to graphically blow your enemies' heads clean off, sex and violence clearly play prominent roles in Fallout 2's world. While inclusion of the "adult-themed" content helps to give the game a gritty, modern feel that gamers can perhaps relate to more than bashing a clan of goblins or orcs with a magic halberd (I think it's also safe to say that Fallout 2's gaming world features more toilets than any computer game to date), it also occasionally presents a distinctly adolescent male perspective, which may offend or alienate some gamers.

The character creation and development systems are almost identical to those in Fallout. Your character has ten primary skills, up to two optional traits, which both benefit and penalize, and a large variety of enhancing "perks" (several of which are new) that become available as your character completes quests and gains experience levels. The skills are all straight from the original game, but some of the more exotic skills such as "science" and "repair" are considerably more useful than they were in Fallout. The Fallout games both allow you to create truly individualized characters, which you can then role-play essentially as you see fit. In the Fallout games you can choose to play a righteous avenger, a nonviolent scientist, a self-motivated bigot, an evil sociopath, a jinxed moron, or some personalized variation of these character types, and you'll experience the game quite differently depending upon your character's attributes and actions. While other role-playing games boast of "dozens" of available player-character types, your experience with any of those characters will often be almost identical to all of the others except you'll use different weapons in combat. No game does a better job than Fallout 2 at actually giving you opportunities to act in a distinctive manner representative of the role you choose to play with your character. A smooth-talking, highly intelligent character may be able to persuade other characters to reveal their secrets, while a dim-witted thug character may be unable to express anything other than basic intentions and risks being manipulated and sold into slavery. Fallout 2 is the real deal when it comes to role-playing, and its open-ended nature makes it far more replayable than the average game of the genre.

The core of Fallout's acclaimed tactical combat system was migrated to the sequel with only a few, notable changes. There are a number of new modern and futuristic weapons available, and budding Jackie Chans will be pleased to learn that there is also a variety of new unarmed combat options. In Fallout, you could ignore most of the weapons in the game by advancing almost immediately from using rudimentary knives and spears to rocket launchers and turbo laser guns. Fallout 2, however, requires you to rely upon weaker or moderately powered weapons during the early stages of the game and appropriately limits access to the otherwise unbalancing BFGs and incinerators until later in the game. Combat can be challenging at times, as even an experienced, well-equipped character can be brought down by a single critical hit from a powerful weapon. It's quite humbling to have your carefully crafted character's head explode as a result of a lucky Gauss rifle shot after you underestimated an apparently not-so-helpless stormtrooper.

Like the original game, in Fallout 2 your character can be accompanied by a number of computer-controlled nonplayer characters. Unlike in Fallout, nonplayer characters can now wear armor and gain proficiency in skills as your character does, making them more consistently useful during the course of the game. While in Fallout you were forced to use the "steal" command to trade items with your companions, you can now trade with your party members using a new - you guessed it - "trade" interface option. You can also get nonplayer characters to move out of your way, if need be, which was a somewhat glaring omission from the original game. In combat, nonplayer characters are a little more cautious with their gunplay to avoid splattering your character with automatic weapons fire, but they don't seem to exhibit their newfound cautious nature when it comes to dealing with your other party members. Dealing with a little "friendly fire" wouldn't be too bad, and perhaps could be expected given the nature of some of the weaponry, if it weren't for the fact that your companions will quickly turn on you, or each other, at the slightest provocation. You'd think that traveling for months of gaming time together, sharing mountains of booty and incinerating dozens of enemies, would inspire some loyalty in your companions, but accidentally slapping your power armor-wearing companion with a misplaced left jab will inevitably result in the companion trying to get medieval on your butt. Ingrates.

Also new is an interface to allow you to customize your companions' actions in combat. While the available options will vary depending upon each companion's inherent personality, the interface is intended to permit you to influence the way a companion reacts in certain situations. Unfortunately, at least in the initial release of the game, the companions don't seem to always react in a manner consistent with their settings and tend to occasionally run away in terror when commanded to fight until they drop. The path-finding abilities of nonplayer characters could also use some work, as they have a tendency to gleefully parade through visible mine fields or other hazardous areas. A patch, currently in beta form, intends to address, among other things, the bizarre reactions of nonplayer characters in certain circumstances. Unfortunately the patch is required for a variety of other purposes as well. Like the original game, Fallout 2 features a number of scripting errors and other quirks that can prevent your character from completing, or getting credit for completing, certain quests. There are bugs that result in the game taking minutes instead of seconds to load or save; a bug that limits the availability of your character's spiffy new car (which is almost a necessity, given the greater traveling distances in this game compared with its predecessor); a bug that causes the game to fail to recognize a "very enhanced" electronic lock-pick as an "enhanced" electronic lock-pick; and bugs that freeze up the game when your character takes otherwise intuitive actions, like asking a quest giver to further describe the nature of the quest. In other words, there are big bugs, small bugs, mildly hair-pulling ones, and game-stopping disruptive ones. Plenty for everybody.

Black Isle has already issued a couple of versions of a beta patch that purports to fix most of these problems, but the patch invalidates previously saved games. Fortunately, most of the game's bugs are minor, and even in its originally released state, the game can be played to completion. Still, it's disappointing that the game wasn't thoroughly debugged prior to release, and gamers not content to overlook the game's bugs and quirks may find the game an occasionally frustrating experience. But even in its current state, there are numerous little design details that collectively raise Fallout 2 above its competitors, such as the detailed conversations nonplayer characters occasionally have between themselves, the "special" encounters, the comic-relief ghouls who appear in a variety of situations, and some absolutely inspired quest objectives and solutions. It's pretty hard not to have fondness for a game that gives you experience points for activities as diverse as playing chess against a mutated scorpion, suffocating a mob boss, fixing a two-headed cow's leg, and slicing a Tom Cruise doppelganger in half with your trusty laser rifle. The core elements of 1997's best role-playing game are intact and, in several ways, have been improved. Highly recommended. 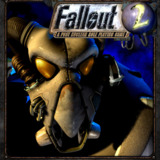