There's no way to break the curse on this staggeringly bad action game.

Fairytale Fights is an action game that puts an emphasis on slicing lumberjacks, gingerbread men, rabbits, wolves, mice, and other storybook characters into messy little pieces as gallons of blood spill on the ground. So perhaps, in a twisted way, it's appropriate that the gameplay feels sloppy and the experience of playing the game is nothing short of painful.

You start your terrible trek in Taleville, playing as one of four famous fairy-tale characters: Little Red Riding Hood, Snow White, the naked emperor, or Jack (of Jack and the Beanstalk fame). Now forgotten after being usurped from the leading role in each of their stories, they set off to make names for themselves again by undertaking a quest to recover a stolen magical kettle. It may take its inspiration from many classic stories, but if you go into this game expecting a tale worthy of the Brothers Grimm, you'll be deeply disappointed. The story is paper-thin and serves only as the flimsiest pretense to bring you face-to-face with Pinocchio, the Pied Piper, and other famous fairy-tale personages.

In each linear level, you run along a set path through forests, candy castles, quaint hamlets, and other storybook settings. You'll occasionally need to make tricky jumps over spinning blades or onto moving platforms, but the controls aren't tight enough to make this maneuvering enjoyable. The camera also maintains too great a distance from the action at times, making it difficult to tell just when you should leap to land on that drifting log or rotating waterwheel. But the platforming is a minor part of the experience. By far the majority of your time will be spent killing off the waves of enemies that hinder your progress. To attack, you move the right thumbstick in any direction. To chain attacks together, you just keep wobbling the thumbstick, and to charge attacks, you hold the thumbstick in one direction and then quickly push it in another. The gameplay isn't just shallow; it's also sloppy and imprecise, feeling largely disconnected from your actions, and as a result, it's thoroughly uninvolving. You can't effectively target specific enemies, and there's no meaningful variety to your attacks. All you can do is move the right thumbstick around wildly to pummel your attackers. The lack of control also leads to other frustrations. If you're unleashing attacks anywhere near an edge, it's very easy for your character's combo to carry you right off of it to your death.

Not that this matters at all. The only penalty for death is the loss of a portion of the money you've gathered from chests and defeated enemies on that level. But since the only thing money is good for is the completely unimportant funding of a statue of your character in Taleville, losing it is of no real consequence. That doesn't mean that dying can't get annoying, though. Particularly on the hard difficulty level, there may be times when the instant you respawn, you're mobbed by so many foes that you barely have time to get an attack in before you've been ripped to shreds and need to respawn again. There's nothing satisfying about this kind of difficulty, though. Since there's no depth to the gameplay, there's no skillful way to respond to these kinds of situations. It's just frustrating.

Gore is the gimmick with which the game tries to distract you from its shallowness and repetition. Scattered throughout each level are blunt and sharp objects you can wield as weapons. These include axes, clubs, swordfish, swordfish skeletons, rulers, waffle irons, lollipops, rolling pins, pitchforks, and bratwurst. Each weapon has an effectiveness rating in stars or skulls, but for all that variety, there's no real difference in how one sharp weapon or one blunt weapon behaves compared to any other. Blunt weapons are particularly useful with charge attacks, while sharp weapons are particularly useful when you want to cut your enemies to pieces and spill blood everywhere. Once that blood has been spilled, you can slide around on it like a skater on ice, and if your glory bar is fully charged, you can perform a glory attack in which your character dismembers an enemy with movements that match your inputs with the thumbstick. All this gleeful grisliness may be good for a laugh in the first few minutes, but it's quickly overshadowed by the crushing boredom of the gameplay. There are also ranged weapons, such as blunderbusses and candy guns, that you can pick up, but the inability to aim with any precision limits both their effectiveness and the enjoyment you're likely to get from them.

Making matters worse, unlike most real fairy tales, this game doesn't have the sense to keep things brief. It's the equivalent of a heavy, bloated tome that desperately needed a merciless editor to look it over before publication. Many of the 22 levels feel as if they go on forever. Stop to slaughter a dozen gingerbread men, and 20 seconds later you'll have to slaughter a dozen more. By the time all is said and done, you may never want to see another gingerbread man as long as you live. Just forcing your way through each interminable level is an act of heroism worthy of being chronicled in legends. But there's no reason to soldier on in the face of such unwavering tedium, no pot o' gold waiting for you at the end of this nightmarish rainbow. Just more, more, and still more of the same. You experience the same shallow combat against the same brain-dead AI in the eighth hour as you do in the first. Sometimes less is more, and in the case of Fairytale Fights, more is definitely less.

The occasional boss battles do nothing to break the monotony. In fact, they often contribute to it. An early boss battle pits you against a giant beaver who telegraphs all of his attacks, making the battle pretty easy, but this encounter demonstrates the same lack of pacing that characterizes the entire game. After you've pounded or sliced him endlessly, an animation plays that leads you to think it's all over. But then the beaver gets a second wind, and you have to go through the whole dull process all over again. A later boss battle has you fighting the Pied Piper, who is at the keys of a deadly, fire-spewing pipe organ. Here, the timing necessary to avoid the constant jets of flame is so precise as to border on the absurd, making this battle an exercise not in boredom, but in frustration.

Fairytale Fights offers local or online multiplayer for up to four players, but while enduring the experience with friends makes it a mite less painful, it still doesn't make it fun. There's something to be said for the charms of simple, arcade-style multiplayer mayhem, but this game is so basic and repetitive, your eyes may glaze over. There's also a competitive free-for-all multiplayer mode in which you battle it out to slice each other to bits or beat each other to a bloody pulp, but it serves only to emphasize just how shallow and unenjoyable the combat system is. Unsurprisingly, very few people are playing the game online as of this writing, so don't expect a lively multiplayer scene. Alone or with friends, cooperating or competing, this game is beyond redemption.

The visuals and sound are on par with everything else about Fairytale Fights. It's true that there's a touch of maniacal inspiration to some of the character designs. For instance, you may not soon forget the sight of Hansel and Gretel, reimagined as candy-crazed conjoined twins. Unfortunately, this visual inspiration is rare, and most of the character models are unattractive. The environments show some basic charm, but the overall look is too simplified to be appealing. The sound is equally disappointing, with forgettable tunes and minimal sound effects. Your characters express themselves only through occasional grunts, screams, and laughs that sound oddly muted and don't have much personality.

Even if it were a downloadable game for a fraction of the price, Fairytale Fights would not be recommendable. The very idea of this shallow, repetitive, bloated, excruciating adventure as a full-priced retail offering is nothing short of ludicrous. If there's any moral to be gleaned from this demented fairy tale, it is this: Don't play this game. 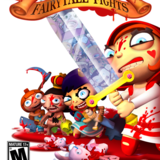