As a sequel to Flashback the Quest for Identity, Fade to Black attempts to addsome mid-90s technological flash to the early-90s classic, with mixed results.

As a sequel to Flashback the Quest for Identity, Fade to Black attempts to add some mid-90s technological flash to the early-90s classic, with mixed results. Although the finished product has all the makings of a great game, the constantly shifting perspective and cumbersome interface too often get in the way of the action.

Anyone familiar with Flashback will be familiar with the structure of Fade to Black. Resuming the role of Conrad Hart, you once again face the treacherous alien Morphs, who have become even more powerful over the years. Shoot your way through each level, solving a few puzzles to gain access to new areas, then make your way to the next, even more difficult level.

That's where any similarity between Fade to Black and its predecessor ends. Featuring a perspective which is one part Doom, two parts Alone in the Dark, Fade to Black uses a moving camera technique designed to follow the action from the best possible angle. Unfortunately, after the initial "wow" factor wears off, this constantly roving eye can become frustrating.

Even more frustrating are the controls, and there are many - too many, when you consider that your moves are pretty much limited to looking around corners, running, and shooting. In the end, Fade to Black is a good game with solid puzzles and a great atmosphere, but the flawed interface makes it difficult to become fully immersed in the action. 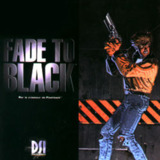