F/A-18 Hornet 3.0 continues the noble tradition of creating a great sim andforgetting to put a game inside of it.

F/A-18 Hornet 3.0 continues the noble tradition of creating a great sim and forgetting to put a game inside of it. Failing to see the forest for the trees seems almost inevitable when you're busy creating an incredibly detailed avionics suite and flight model, but in the wake of Back to Baghdad (also known as "Back to Babbages") and A-10 Cuba!, it is getting a little wearisome.

Hornet 3.0 is a PC port of the classic Mac sim (stop laughing!) from GPS, and in many ways it is a superior piece of work. The last real F/A-18 Hornet sim for the PC was Fleet Defender from MicroProse, even though the Hornet does make a guest appearance in Jetfighter III and US Navy Fighters. A frontline multirole aircraft with a shaky reputation, its role as a carrier aircraft is part of its appeal to sim fans looking for a different challenge. That is, for sim fans who like smashing into a tiny carrier deck instead of landing on a nice stable runway.

As a pure sim, Hornet is superb. The avionics suite is meticulous, with nicely implemented HUD, MFDs, standby gauges, and digital display indicators. Air and ground radar modes are some of the best in town, with GMT, SEA, MAP, and EXP1 modes for air-to-ground, and RWS, VA, STT, and TWS for air-to-air. Scan elevation, scan azimuth, range, antenna elevations are all modeled. An air-combat maneuvering mode sets antenna scan patterns automatically for wide, vertical, gun, and boresight acquisition. This is how radar modes should be done, and there are absolutely no complaints here at all.

The flight model is also tops, with a few quirks that seem to have been sorted out in a subsequent patch. Handling in both normal and high-G flight, fuel consumption and drag from external stores all feel about right. Damage assessment and stalls seemed a little off in the initial release: The same damage was incurred repeatedly, and stalls were either too severe during engine loss, or not severe enough during lower speeds. There was also no visual cue for missile hits (no shuddering). These issues have all been addressed in version 3.0.1, as has the inconsistent AI. Wingmen and enemy AI are decent, with fair responsiveness and no really stupid mistakes observed.

Graphically, Hornet is plain-Jane polygons, which is either good or bad depending on your preferences. Frame rates at resolutions up to 1024x768 are fluid and graphics are clean. For the hard-core crew, this is often preferable to the messy textures of better-looking sims, and it does make spotting targets and reading the situation easier. As for the rest of the game engine, it's a bit cumbersome. The cockpit-style main menu is a bit convoluted and hard to navigate. On the positive side, there are 90 minutes of video tutorials covering every aspect of the sim and the instruments. This is welcome since the manual is woefully insufficient, poorly laid out, and has no index.

All of these fairly positive comments lead up to the largest failing of Hornet 3.0: missions and campaigns. There is a grand total of 28 missions in a single Persian Gulf campaign. These missions are doled out four at a time, with you selecting the one you want to fly, then going on to the next (whether you won the last one or not). This happens seven times and culminates in a nuclear interception. You can go back and play the campaign three more times to get to the remaining 21 missions. None of these missions are dynamically linked, and the structure is rather unsatisfying, with transit times that are too short and a battlefield that doesn't feel realistic at all. It's not that the missions are easy, in fact, they're often pretty tough. But you don't get that Longbow-like sense of being part of a large operation. A few Hawaiian training missions and stand-alone quick combat scenarios flesh out the action, but not enough.

This, coupled with the paltry number of missions and no mission editor, is a crippling strike against an otherwise excellent simulation. Hornet has some real things to recommend it - certainly more than Back to Baghdad and A10 Cuba! As a pure recreation of F/A-18 flight, it is the best on the market. But as a unified, satisfying gaming experience, it needs work. 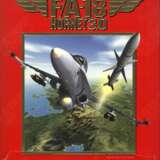